The XJ Sedan is a legendary Jaguar car. Today, the history of this model has seven generations. The very first Jaguar with the XJ index, the Jaguar XJ6, was shown to the public on September 26, 1968. Sir William Lyons, the company's founder, personally introduced the novelty in Birmingham.

The figure in the title indicated the number of engine cylinders, and the letters "X" and "J" remained from the name of the project "eXperimental Jaguar". The XJ series gained fame as a “true Jaguar” and was very popular, despite the impressive price. In the basic version with a 6-cylinder engine with two overhead camshafts and a volume of 2.8 liters, the Jaguar XJ6 cost 1800 pounds. Version with automatic transmission and engine capacity of 4.2 liters was much more expensive - 2,400 pounds.

With the latest powertrain, the Jaguar XJ6 developed about 200 km / h, and acceleration to the "hundred" took a little less than 9 seconds. Transmission to choose from: 4-speed gearbox (some models additionally had an overdrive unit) or 3-speed automatic. Independent suspension of all wheels, with the main focus on the effective geometry of its levers, eliminated "pecks" when braking. In October 1972, a model with an extended wheelbase, which was called the XJ6L, was released. It featured a more spacious rear passenger compartment.

Jaguar XJ6 won many awards, including the title of "Car of the Year." It was made in the best conservative traditions of its predecessors. Combined the refinement of the Rolls-Royce, the pickup of the Jaguar and the ability to hold the road typical of sports cars. The release of the first generation continued until 1973. 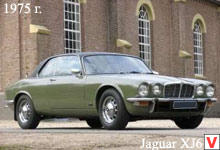 The Jaguar XJ6 of the second series can hardly be considered a completely new car. It is rather a product of deep facelift. First of all, its necessity was dictated by the fact that in the USA new safety standards came into force, providing for a higher location of the bumper (cars of the first years of production had an understated bumper). Hence the reduction of the grille.

Along the way, and changed the interior. In particular, the devices were now in front of the driver’s eyes, and not in the central part as before. In addition, it was decided to abandon the engine capacity of 2.8 liters, as well as to stop the release of "short base" versions. In January 1974, the car was released with two doors of the "coupe" type, which received the designation XJ6C. 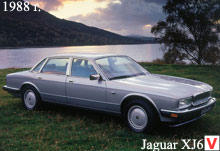 And in April 1975, the XJ6 model with a 3.4 liter engine appeared, whose cylinder block was much better able to withstand torsional vibrations. The release of the Jaguar XJ6 of the second generation was discontinued in 1979. For the first time in the entire history of the brand, the development of the third generation XJ6 style was entrusted to an “outside” studio. Above the design worked famous studio Pininfarina. The area of ​​the glazing increased, which significantly improved the view, the roof line changed. Despite the fact that the car turned out to be even more rapid, there was more space above the heads of the rear passengers.

The elegant exterior and thoughtful details, such as the new electric sunroof and alloy wheels, made the XJ6 Series III one of the most desired cars on the luxury car market. On the six-cylinder versions, instead of a four-stage, a five-speed manual gearbox was used, and the 4.2-liter engines began to be equipped with fuel injection. In 1983, it was decided to give the most luxurious version of the Jaguar XJ the name Sovereign. The debut of the fourth generation took place in 1986. The Jaguar XJ6 has an improved 24-valve AJ-6 aluminum engine with two camshafts and four valves per cylinder and a more modern electronic control system including an onboard computer.

As an alternative to the AJ-6 engine, an upgraded 2.9 liter engine was proposed, albeit still with one camshaft and two valves per cylinder. In 1990, the engine capacity of 3.6 liters gave way to a four-liter engine, and a little later the volume of the “small” engine was increased from 2.9 to 3.2 liters. Since 1993, on special orders began to produce cars with an increased wheelbase. In 1994, the fifth generation saw the light. The design of the XJ6 of this period was called "retro-development". The car was offered with a six-cylinder engine volume of 3.2 and 4.0 liters. In 1995, the new Jaguar XJ began to put on a "long base".

In 1997, the sixth generation Jaguar XJ appeared, but was no longer in the range of power units of the six-cylinder engine.