The XK sports series originates back in 1948, when Jaguar showed the XK120 at the London Motor Show. This car stayed on the conveyor until 1961. Then there was a protracted period, which can be divided into two major stages: the stage when the XJS model was produced and the stage when the XK8 car was launched into production, followed by the production of cars with an engine like supercharger ( model XKR). And now the Jaguar car came out, which on the one hand becomes a logical continuation of the XK model range, but on the other hand it is so different from its predecessor that you can’t call it anything other than the “new XK”.

The new generation XK coupe was first introduced as a concept car Jaguar Advanced Lighweight Coupe at NAIAS`2005 in Detroit. By the September motor show in Frankfurt, he turned into a serial Jaguar XK. The concept was treated extremely humanely: it was deprived of only contrasting aluminum inserts on the body, in order to make the car calmer and more solid. In contrast to the slightly flattened on top of the old XK, the new one is slimmer and more muscular. It has increased wheelbase (2752 mm vs. 2588 mm) and track. The new coupe was created on the XJ platform and received a monocoque aluminum body. Yaguarovtsy claim that he is 31% tougher than before.

At the same time, the car received almost 100 kg lighter: its dry weight is 1595 kg (the former XK weighs 1685 kg). The body structure provides for the presence of the so-called spatial frame ("space frame"). A feature of the Jaguar car body is that in its manufacture it is widely used to join individual parts using adhesives using the adhesion method. As for the appearance of the XK, it should be noted the presence of a folding wall of the rear trunk, which, in fact, has become a tradition. Experts agree that the silhouette of the Jaguar XK very much resembles the new Aston, and this is quite understandable.

The fact is that the design for XK was selected by the artist Ian Kalam, who began his work working for Aston. The front panel of the cabin is located at a small height from the floor, low-lying controls are made so that the driver does not have to once again be distracted from the road. In addition to the traditional instruments on the dashboard, there are two color displays at once. 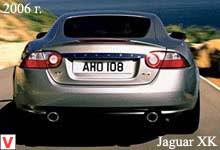 The smaller one is directly in front of the driver's eyes - between the speedometer and the tachometer. It displays operational information such as the current transmission, the indications of the cruise control, the tire pressure sensor and the instructions of the electronic navigator. The one that is bigger - active - is embedded in the center of the dashboard.

It controls the audio system, climate control, navigation system and telephone. Salon can be decorated in three colors: "poplar tree", "walnut" and "sport-aluminum". As standard, a navigation system with a DVD drive is installed that supports the VICS format and is controlled using on-screen touch-sensitive keys, then there is an air-conditioning system with two independent adjustable zones. The first production Jaguar XK was fitted with a naturally aspirated 4.2-liter engine of the latest generation Jaguar AJ-V8, which develops 300 hp. (224 kW) according to the SAE standard or 298 hp (219 kW) according to the EEC standard. 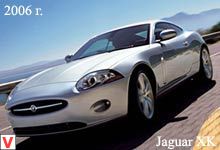 The power unit is paired with a six-speed automatic transmission with manual shift. After some time, the “charged” version with a completely new engine of 4.4 liters V8 32V, developing 400 hp, entered the market. and 540 Nm. Due to the excellent power density, the maximum speed of the XK with this engine reaches 280 km / h, and acceleration to 100 km / h takes less than 5.0 s. The car is equipped with a standard 18-inch wheels, but for an additional fee you can put 19-inch, or even 20-inch tires.

The cast brakes come with analog valves, and are serviced by a 4-channel anti-lock braking system (ABS) and EBD redistributing system, so that the braking force is evenly distributed between all 4 wheels. Thanks to the computerized suspension control system used in the car (indicated by the combination CATS, which means “Computer Active Technology System”), the body of the car, regardless of the quality of the road surface and the high-speed mode chosen by the driver, always maintains an even position. In accordance with the new European safety requirements, the new XK has a no-break front-end design. 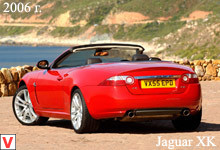 When driving over a person, the hood rises instantly, which reduces the severity of possible injuries. In addition to the unique pedestrian protection system when hitting, the XK is literally stuffed with various safety devices. These include: a system for monitoring tire pressure and tires that maintain performance even in the event of a puncture (optional), active head restraints Protec Jaguar, Forward Alert alert system, scanning the carriageway in front of the car using adaptive cruise control sensors ( ACC) every 10 seconds to warn the driver of a possible collision, and disengageable Dynamic Stability Control with built-in traction control (Trac DSC).

Designers are especially proud of the brakes of the new coupe. Yaguarovtsy claim that they are much more powerful than the previous XK, and have the best feedback from the driver. The wide ventilated brake discs provide a great sense of the brake pedal, guarantee an optimal stopping distance and do not lose their braking properties when heated, caused by prolonged braking in difficult conditions. Of course, the standard equipment includes ABS with emergency brake assist and brake assist and EBD electronic brake-force distribution and Jaguar electronic parking brake.