This British car is definitely a legend. Firstly, because the Jaguar brand itself is already a legend, and secondly, because the design of the car, which has been produced since 1975, is clearly ahead of its time and even shaped the trends of automotive fashion. The fact that the Jaguar XJS was at one time a futuristic car confirms its longevity on the conveyor.

The car stopped producing only in 1996. Initially, XJS was released with a frank sight to America, more precisely, to Florida and California - the states where life-seekers lived in abundance - the money-hungry regulars of Malibu and Santa Monica beaches. Hence, open, generally without a roof and an awning, modifications (obviously not for Albion), in addition to a sports coupe and a convertible, breathtakingly-sized audio systems instead of rear seats, automatic gearbox as the main option and immodest in appetites V12 engines as the most common.

The calculation turned out to be correct - a smart car was quickly registered in the garages of celebrities and rich people. Of the most famous owners of XJS, you can remember Frank Sinatra, as well as Iron Maiden guitarist Adrian Smith. A friend of the famous Kate Moss, the lead singer of the Babyshambles group, the famous brawler Pete Doherty, recently acquired his 8th Jaguar. They became XJS 1986 release. Today, this car is spoiled by the attention and love of celebrities. But it was not always so.

At the 1975 Frankfurt Motor Show, a large audience, besieging the stand of Jaguar, was horrified and indignant after the veil from the new XJS, the successor to the legendary sports model E-type, was torn off. Instead of an elegant sports coupe, the crowd was shown a mechanical monster, huge, flattened, not at all like the adorable E-type. Nobody expected this from famous designer Malcolm Sayer. 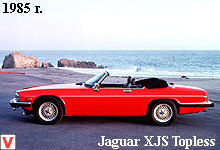 The car was born in the harshest conditions of the crisis in the British automotive and oil industry worldwide, caused by the “Doomsday War” of 1973 in the Middle East. At that time, the very existence of Jaguar was questionable, because with a sharp rise in gasoline prices, car manufacturers with 12-cylinder engines are not in the best of times. Nevertheless, the release of the car was recognized as expedient, and the world received another car, which 20 years after the start of production was recognized as a classic. Presented a novelty from Jaguar caused a shock.

Journalists vainly excelled in inventing derogatory epithets for the car, saying that on both sides of the Atlantic there was still no such ugly car, they accused designers of retreating from traditions, lack of unity of style, in violation of proportions and other mortal sins. Meanwhile, XJS had a very low coefficient of aerodynamic drag - 0.39, a truly powerful and good-quality engine of 5.3 liters and a capacity of 285 liters. with., as well as excellent dynamics - 7 sec. up to 100 km / h. And with the unusual forms of consumers quickly resigned, seeing their elegance and proportionality. Until 1985, the Jaguar XJS was produced exclusively with a coupe. 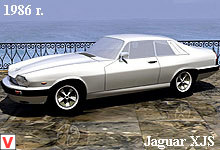 The British have long been ready to release a gig, but as mentioned above, the main consumer of these cars was America, and federal regulations on road safety in the United States prohibited the use of open cars. In 1985, the rules were changed, which was immediately used by automakers, and among the first was Jaguar, who instantly offered Jaguar XJS topless. Strictly speaking, the body was not completely open: with the top folded down, the safety cage remained, so it was more targa than a convertible. Nevertheless, the success in the American market was overwhelming, despite the fact that the car was initially completed with only a six (219 km / h) and was purely a two-seater.

Only a considerable price prevented him from becoming the cult machine of America along with the Corvette and the Mustang. For many years, the only place where engineers with restyling dared to invade was the engine compartment. Engines for XJS changed with enviable constancy in 1976, 1981, 1883, 1991, 1992. 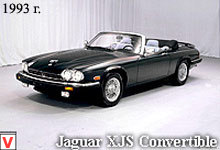 Instead of the famous 12-cylinder 5.3 l. the engine was set to 6-cylinder, 3.6-liter, 6-cylinder with 4 liters of volume, 12-cylinder 6-liter, and even 8-liter monsters. But the classic, still considered 5.3 liter V12. The modernization of 1981 increased the power of this engine to 300 hp, the dynamics to 6.5 seconds, and the fuel consumption decreased by 12.5%. The forced engine was designated NOT - High Efficiency (highly efficient). "Maximum speed" at 249 km / h made the Jaguar XJS with HiEf engine the world's fastest car with automatic transmission.

The updated XJ-S was chosen by the Tom Walkinshaw racing team as a fighting vehicle for the ETCC (European Touring Car Championship). For three years, the TWR team (Tom Walkinshaw Racing - not to be confused with the TVR brand) won 16 victories. Externally, the XJS convertible is not at all a small car, it's just very low - even with a raised awning to an adult, just waist-high. The cabriolet, unlike the XJS 2 + 2 coupe, is a strictly two-seater, but it inherited long doors from the basic version, so the landing is not very comfortable, although the low seat doesn’t cause problems. Ergonomics is excellent, the body is the only correct position. 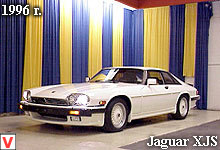 The seats are upholstered in soft leather, have two standard adjustments, plus pneumatic pumping of the pillows and the lumbar region of the back. The bagel is covered with leather, the cross section is optimal, the diameter is what is needed, and the spokes do not interfere with the view of the instruments. Before my eyes, the speedometer, digitized up to 260 km / h, and the tachometer - up to 7000 rpm, between them are four indicators of the parameters of the engine with the original vertical scales. All the numbers on the devices are clearly drawn, read very easily. Light control is carried out using a rotary knob near the steering column.

The dashboard is very bright - so that it can be seen even in the sun - the symbols corresponding to the included consumers are displayed. The paddle switches control: left - turn signals, right - wiper. The pedals are perfectly positioned.

In the central part of the front panel, under the deflectors of the heater is the display of the on-board computer. Below that is an impressively sized audio jack with so many wires that doubts arise: is it a car or a recording studio? Motor starts up instantly, bass rumble soothes hearing. When you press the accelerator pedal, the sound does not get louder, only the tone changes slightly: the higher the revolutions, the higher the timbre. Since 80% of the engine torque develops already at 1500 rpm, the smallest acceleration becomes like a jerk. Driving performance of the Jaguar is beyond praise.

Energy-intensive suspension perfectly handles all the bumps in the road. No vibration, no jolts on deep hollows are not transmitted to the body. The engine and transmission work so smoothly that the car accelerates "in unison", it is impossible to feel the shift. Managed by the machine easily and confidently. Powerful and effective brakes make this car absolutely safe when driving at any (of course, reasonable) speeds. In short, this is a car for pleasure, for walking with your girlfriend. And at the same time it is a serious and very powerful car with a pronounced sporty character.

Having once started as a supercar, Jaguar XJS 15 years later became the symbol of "sweet life" - that is why Ford (who acquired the Jaguar brand in 1990) and tried to keep it on the conveyor to the last. In the 90s, the XJS was modified with an unworthy classic frequency: in 1993 alone, new bumpers appeared, the rear brakes moved closer to the board, the cabriolet got the 2 + 2 landing formula. In 1994, the V12 began to use a multi-point fuel injection system, bringing the power to 333 liters.

XJS production continued until April 4, 1996; The classic, which has been on the assembly line for almost 21 years, did not become a truly iconic car, most likely only because of the high price, the inherent quality of any real Jaguar.