The Jaguar XE debut marks the return of the brand to the compact executive car segment. The model was publicly presented at the Paris Motor Show 2014, the serial release was launched in 2015. In the Jaguar lineup, the model occupies the lowest class step so far and is designed to compete with the BMW trio, as well as the Mercedes C-class. The XE Sedan is not only the most compact, but also the most high-tech Jaguar.

At the heart of the car is a new modular platform iQ [Al], created entirely from scratch. This platform involves the abundant use of aluminum, as well as glue and riveted connection of the elements of the power frame. While in this class no one can boast of such. But Jaguar took a chance, and applied on affordable (by the standards of the brand) technology sedans, which were previously honed on the XJ representative and sports XK, and now are also used in the production of Range Rover and Range Rover Sport SUVs. By the way, it is with the latest XE to divide the conveyor at the plant in Solihull.

It is noteworthy that the Jaguar XE was the first car in the world to incorporate the new aluminum RC5754, which consists entirely of recycled products. In the XE frame, there are other varieties of "winged" metal - 6000 and AC300. Let them be known for a long time, but they are distinguished by their special strength and rigidity. For example, "six thousandth" aluminum allowed to reduce the thickness of body panels from 1.5 to 1.1 mm without prejudice to their characteristics. The high proportion of aluminum contributed to the lightness of the body.

If we talk specifically about the weight characteristics, the curb weight of the Jaguar XE in the base version is only 1474 kg, allowing you to win from competitors from 10 to 70 kg. The length of the sedan is 4686 mm, the wheelbase is 2835 mm, the width fits into the frames of 1850 mm, and the height rests on the mark of 1416 mm. The design team, led by Ian Calum, has created an elegant, sporty and somewhat conservative-looking sedan. Even in the era of globalization and unification, Jaguar remains faithful to the traditions, therefore XE has many family traits that are present to other models of the brand. 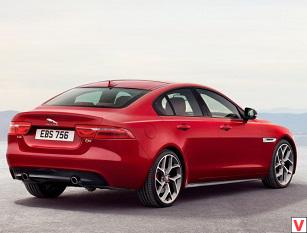 For example, in the design of the XE traced the features of the F-Type - pattern "J" daytime running lights, front grille, side air intakes and taillights. More pronounced relief of the hood than on other models of Jaguar, create a purposeful, muscular appearance. Even when the car is standing still, it looks dynamic thanks to the rising centerline of the body. The dynamic and stylish appearance of the Jaguar XE not only attracts attention, but also gives the sedan excellent aerodynamics. The frontal drag coefficient of the body is 0.26 Cx.

The five-seater saloon Jaguar XE got a modern ergonomic layout with a bit of a sporty fit in the front and plenty of free space in the back, which brings it closer to business class in terms of comfort and sports cars for driving sensations. Of the minuses, it is possible to note the not quite comfortable fit to the second row due to the high thresholds and low doorway. In the interior trim Jaguar XE uses only high quality materials. In expensive versions, frank luxury is also attached to quality. 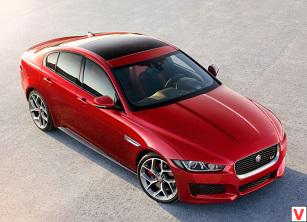 In those versions where the word “Sport” appears in the title, notes of “sportiness” really appear in the cabin, but luxury and austerity are still the leitmotif. Designers have changed the design of the center console, making it more recessed. Finish is made of fine-grained leather. In total, 10 interior color schemes have been proposed, including the lighting and color of the seat trim. As standard, the interior is made in a glossy black color with accents of textured aluminum and natural wood inserts. Jaguar XE will be the first Jaguar equipped with electric power steering. The design of the devices is intended to emphasize the sporting purpose of the sedan.

Jaguar XE has an 8-inch touchscreen display and a completely new infotainment system InControl with a set of the latest technologies, including Bluetooth, streaming audio, the ability to connect mobile devices via USB, voice control and even a Wi-Fi access point. After connecting to the system, access to various applications on the mobile device is carried out using the touch display XE. Optionally available laser projection dashboard, which provides a projection of color images with high contrast on the windshield.

The trunk of the Jaguar XE holds 455 liters of cargo. The Jaguar XE engine range is quite extensive. Opens the 4-cylinder 2.0-liter AJ200D diesel engine from the new Ingenium family, capable of developing up to 163 hp. power. The fuel consumption of the engine AJ200D is about 4.1 liters per 100 km in the combined cycle. Just above the list of engines will be located a forced version of this diesel engine, issuing 180 hp.

power and 430 Nm of torque. The 4-cylinder 2.0-liter engine with turbocharging, which, depending on the degree of forcing produces 200 or 240 hp, opens the line of petrol power units. power. The most powerful version is called the XE S. It uses a 3.0-liter V6 petrol engine that produces 340 hp. and 450 Nm of torque.

With this engine Jaguar XE S is able to accelerate from 0 to 100 km / h in 5.1 seconds. Top speed is electronically limited to 250 km / h. Aggregated engines of the new sedan with 8-speed automatic transmission ZF 8HP45. We add that the 2.0-liter engines (both gasoline and diesel) will also be able to work in tandem with a 6-step "mechanics".

At the first stage of sales, Jaguar XE will receive only rear-wheel drive, but the platform design allows you to install an all-wheel drive transmission, which should appear in the list of new equipment a little later. The Jaguar XE suspension is completely independent, the front is a double-lever, and the rear is an integral multi-link. On all wheels, ventilated disc brakes are used, while (depending on engine power) the diameter of the front discs varies from 316 to 350 mm, and the rear - from 300 to 325 mm. Rack and pinion steering mechanism is complemented by an electromechanical amplifier with variable gear ratio.

At the basic level of equipment, this sports sedan can boast of: two-zone climate control, electric heated and heated rear-view mirrors, leather steering wheel and a six-speaker audio system.