The Jaguar XJ8 first appeared on the market at the end of 1997, when the second generation of the XJ series (top-class sedans) was already completed. His debut took place in September 1997, when he was given the name X308. Compared to its predecessors, the car interior has changed, or rather, the instrument panel. With the new panel and console, the Jaguar XJ8 interior has become much more elegant.

As for the exterior, the car received a new grille, bumper, along with oval turn signals and overall reflectors, as well as new modern headlights. For the rear-wheel drive sedans XJ8 were developed new V-shaped 8-cylinder engines. Only three engine options were offered: a 3.2-liter engine with a capacity of 237 liters. with., 4.0-liter engine with a capacity of 284 liters. from. and its turbo modification capacity of 363 liters. with., which was offered for the sports version called Jaguar XJR.

Standard models XJ8 equipped with a 5-speed automatic transmission. Also, the XJR sports model had a 5-speed W5A580 automatic transmission, which was used by Mercedes in the Mercedes-Benz AMG E55, and other high-powered engines. In 2002, a limited version of the Jaguar XJR called the XJR 100 was released. This model had only a black body color and a black leather trim with red stitching. In 2003, the third generation of the XJ series, which was called the X350, appears. Just like the Audi A8, the XJ line has already received the chassis and body, made using aluminum.

But unlike the A8, Jaguar used a system to connect elements using epoxy resin and special rivets. The use of aluminum instead of steel elements in such a design of the body and chassis made it possible to achieve a significantly lower weight (approximately 40%). It is worth noting that the wheelbase of the car has become longer. The 4.0-liter engines of the second generation changed their 4.2-liter power units with a capacity of 294 hp. and 400 hp (turbocharged version), and for the European market, cars were equipped with a 3.5-liter V8 engine, which was designed based on the previous-generation 3.2-liter V8. 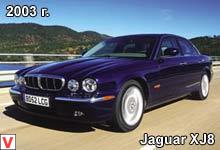 Also in 2003, the Super V8 version appeared, which had an elongated wheelbase and a high level of trim called the Vanden Plas or Daimler. In 2005, the Super V8 was replaced by the Daimler Super Eight model, which was notable for the new grille and some elements and options in the cabin. In August 2005, the Super V8 Portfolio version appears (which Jaguar announced at the beginning of 2005 as the most unique, powerful and expensive model of the XJ series). For this model, it was proposed only two body colors: Black Cherry and Winter Gold. Under the hood was a turbocharged 32-valve AJ-V8 engine with a 4.2-liter capacity of 400 hp.

The maximum speed of the car is 249 km / h, and acceleration to 100 km / h takes less than 5 seconds. As for the transmission, there is a 6-speed automatic transmission. The Jaguar XJ8 suspension is equipped with a CATS system that adjusts the stiffness of the shock absorbers. In 2007, introduced the XJ series car with an updated appearance for the 2008 model year. Minor changes were made to the cabin: the new front seats and increased legroom for rear passengers. 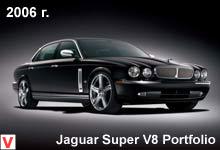 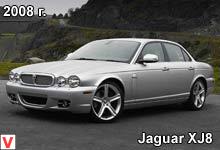