The XJ Sedan first appeared in public in the spring of 2003 as a model for the 2004 model year. The car has the appearance of a typical representative of the family Jaguar. Retaining the impeccability of style, XJ has become the embodiment of automotive innovation. For the first time in the history of the brand, this model received a fully aluminum monocoque bearing body (60% tougher and 40% lighter than the steel equivalent). Self-adjusting, air suspension changes ground clearance depending on driving speed, providing better handling.

Nine variants of the leather interior will satisfy the most demanding customers, and the DVD player and TVs in the headrests of the front seats will not let passengers get bored on the way. Elegant, sensual lines, the use of the most expensive natural materials, exquisite trim and impeccable quality - all this distinguishes the Jaguar from a simple car. The most important event for the XJ was the introduction of an extended version of the LWB (wheelbase 3034 mm) in early 2004. For ease of landing, the height of the roof above the rear seats is increased by 70 mm.

Premium audio system (12 speakers + subwoofer), standard for Super V8, built-in GSM phone, steering wheel in leather and wood, sunroof, 20-inch wheels, navigation + TV, and LWB (tables, DVD and two displays for rear VIP passengers, 4-zone climate control and much more). In 2005, at the auto show in New York, Jaguar introduced the “charged” version of the XJ sedan, moreover, built on the basis of its long version. The car received the name Jaguar XJ Super V8 Portfolio. Under the hood of the XJ Super V8 Portfolio is a 400-strong version of the new 4.2-liter V8 engine with a mechanical supercharger, which is aggregated with a six-speed manual gearbox. 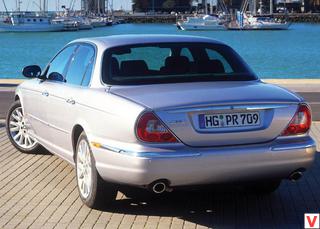 From zero to one hundred kilometers per hour, the car can accelerate in five seconds, and its maximum speed is limited to 250 kilometers per hour. In addition to the engine, a special version of the Jaguar XJ is distinguished by an exclusive body color, the presence of stylish 20-inch wheels, a fine-meshed grille and aluminum “gills” on the front wings. The interior of the car has an original interior trim, an advanced DVD system and some other details that distinguish the Super V8 Portfolio from the basic versions. In 2006, the company Jaguar continued the process of improving the entire range of sedans XJ.

To reduce the level of noise penetrating the car, sound-absorbing multi-layer side windows were used, and a state-of-the-art tire pressure monitoring system determines its fall in all five wheels, including the spare one. The new brake system with discs of increased diameter and stiffer calipers improved the already high braking characteristics of the XJ. In 2009, there was a cardinal update Jaguar XJ, it was still luxurious, but acquired futuristic features in the lines of the body and became even more rapid. Appearance turned out bright: updated grille, teardrop-shaped windows, cat headlights cut. 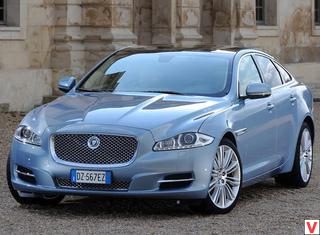 Xenon headlights are equipped with LED lights and a sensor that automatically switches between high and low beam. Designers did everything to ensure that the car did not lose its classic charm. Squared headlamps, vertical taillights, vyshtampovki on the hood and sidewalls or an impressive grille give the XJ a special, luxury charm.

The car has become a little longer and wider, but the main thing - the configuration of the body has changed dramatically. The classic three-volume sedan with a pronounced trunk was replaced by the fashionable today concept of a four-door coupe, which from a distance can be mistaken for a two-volume body with a roofline falling backwards, with the boot lid opening with the rear window. The updated Jaguar XJ has a surprisingly low drag coefficient of 0.29. The interior of the Jaguar XJ remained true to itself. 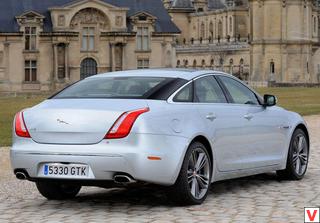 The cabin is characterized by comfort and space: five people in the Jaguar XJ will feel great even on a long journey. Everywhere only high-quality materials, wooden parts are created by hand and fit together perfectly. High-quality leather is everywhere, not only the armchairs, but also the armrests, doors, the central panel and the dashboard are trimmed to it. On the sporty character of the exterior of the body resemble decorative inserts made of aluminum. The classic layout of controls in the Jaguar XJ organically echoes the latest technical solutions. The selector washer of the 6-range automat, which is convenient to operate with a single brush, leaves the center console.

Just above is the touch screen of the navigation and infotainment system, which displays the tactile keys for climate control, communication functions, massage for the front seats and other wealth of optional options. The main feature of the touch screen is the ability to show two different information fields at once: thanks to Dual-View technology, it is possible to simultaneously watch driver and DVD passenger navigation. The configuration of devices that pop up when starting the engine on a 12.3-inch color display may vary depending on the preferences of the driver. One of the brightest innovations of the cabin is the panoramic glass roof.

The trunk volume is impressive, almost 520 liters. At the choice of the buyer, the Jaguar XJ can be equipped with various types of engines: from a three-liter diesel engine with double turbocharging to a five-liter gasoline unit capable of delivering 510 hp of power. with a stunning torque.

All modifications of the car are equipped with an automatic six-speed gearbox, created in the laboratories of the German concern ZF. A top-end sedan can accelerate to a hundred in just 4.5 seconds. The XJ suspension is complemented by adjustable shock absorbers, which provide excellent handling and comfort for passengers. In the summer of 2015, the British automaker introduced once again updated Jaguar XJ.

The flagship of the "cat" brand has received small changes in appearance, new configuration and improved steering. Appearance sedan has changed slightly. The updated XJ 2015 can be distinguished from its predecessor in slightly different designs of all-LED headlights, an enlarged and more sheer grille. In the top-end air intakes are underlined with chrome. The characteristic elongated rear lights have slightly changed graphics, and the exhaust pipes have acquired an oval shape. The car has a classic look with excellent design, which attracts the eye, but it does not have defiant features.

As before, the Jaguar XJ 2015 is available in two versions of the wheelbase - standard (SWB) and extended (LWB). In the first embodiment, the overall length of the sedan is 5,130 mm (the wheelbase is 3,032), in the second, 5,255 (the wheelbase is 3,157). The width of the car - 1,899 millimeters, height - 1,460. The main innovation in the cabin is the infotainment complex InControl Touch Pro with a four-core Intel processor, an eight-inch touchscreen display, a 60-gigabyte hard drive and smartphone integration.

There is navigation, Wi-Fi, Meridian audio system with 26 speakers with a capacity of 1,300 watts. The sedan is offered with adaptive cruise control, all-round cameras and a semi-automatic parking system. Jaguar XJ 2015 received two new modifications: Autobiography and R-Sport. The R-Sport version flaunts an aggressive front bumper, side skirts, electric curtain air intake, a small spoiler on the trunk lid, a quartet of exhaust pipes, sports seats and a proprietary steering wheel, trimmed the center console with black piano lacquer and 20-inch Mataivia wheels. The luxurious Autobiography package is only available for the long-base XJ LWB version.

It is distinguished by a leather interior with contrasting stitching, illuminated stainless steel sills, natural oak trim, as well as separate rear seats with massage and ventilation functions, 10.2-inch displays in the backs of the front seats. The line of power units consists of powerful engines. All of them come with direct injection and variable valve timing. After modernization, the output of the 3.0-liter diesel engine increased from the previous 275 to 300 hp, and the peak moment reached 700 Nm against 600 before. Engineers managed to achieve this by improving turbocharging and injection systems.

In addition, the hydraulic power steering gave way to the electric EPAS, which has a beneficial effect on the handling and reduced the average fuel consumption in the combined cycle by 3%. The car is produced at the JLR plant in Castle Bromwich, in the vicinity of Birmingham.