In September 2007, at the Frankfurt Motor Show, the concern Jaguar presented a rear-wheel drive five-seat sports sedan of the E-XF class. The car has replaced the S-Type. This Jaguar was created in the image of the cosmopolitan concept of the C-XF, which was presented at the Detroit auto show. The car lost the modest charm of the British aristocracy. Now Jaguar is fashionable and modern.

The XF design has nothing to do with its predecessor's retro style. Low roof, long hood, puffy wheel arches - this is the sporting character of Jaguar now. It is based on the advanced S-Type platform, which is 12 cm longer. The XF has an overall length of 4,961 mm and a width of 1,877 mm and a long wheelbase (2,909 mm), which makes it 45 mm longer and 25 mm wider than its closest “dimensional” competitor Audi A6. Visually, the XF gives the impression of a sporty, muscular and dynamic car.

“Yaguarovsky” character of the model is determined by its front facing - centered around a large grille, which creates focus for the characteristic lines running back through the hood and body. Behind the design elements combined to emphasize the width of the car. The graphics of the rear lights cover the rear fenders, looking at the developed, muscular arches of the rear wheels.

Interior design gives a feeling of spaciousness. The increased rear wheel track and the widest rear seat in its class mean that adults 1.93 m tall can fit on it with complete comfort. The interior shifts from traditional themes to modern sports luxury. This is achieved through the use of new materials, as well as new graphics and interior lighting systems. Jaguar XF is positioned as a sports car, so it has powerful engines that can accelerate the car up to 250 km / h. 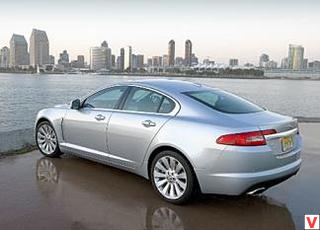 Gamma of power units: a 2.7-liter turbo diesel V6, 210 hp (100 km / h in 8 seconds), 3.0-liter capacity of 250 hp and two 4.2-liter aspirated, with a capacity of 300 (100 km / h in 6.2 seconds) and 420 horsepower (100 km / h in 5.4 seconds). The engines are paired with an automatic transmission with a unique Jaguar Drive Selector system - with the optional sequential manual gear shift Jaguar Sequential Shift. The top XF modification will be equipped with a proprietary Yaguar active CATS (Computer Active Technology System) suspension, which automatically adjusts the stiffness of the shock absorbers depending on the speed and road conditions. Not without modern electronics.

The XF has an automatic speed limiter, a tire pressure monitoring system, a touch screen, an electronic parking brake and much more. Some functions can be controlled using the voice system. The Jaguar Sense system introduces contact or contactless control of the ceiling lights on the upper console and the glove box lock. Other proposed devices include JaguarVoiceTM for voice control of the audio system and mobile phone, front and rear parking sensors, and a rear view camera. 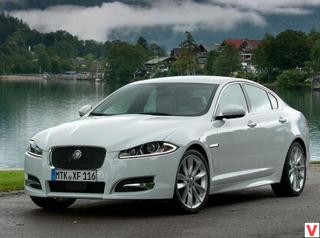 The top version of the 440 W audio system was created in collaboration with Bowers & Wilkins. In addition, the equipment includes a Bluetooth system and an optional iPod and MP3 player connection with full-featured touch-screen controls. The premiere of the restyled version of the Jaguar XF was held in 2011 at the Motorshow in New York. The model has acquired significant stylistic changes in the exterior. Appearance is now made in the style of the flagship model XJ.

Jaguar XF 2011 received other headlights with LED daytime running lights. It is for him restyled car is the easiest to distinguish from the previous version. A larger false radiator grille, installed at a large angle, required a new embossed hood. Also, the novelty has changed the form of chrome lining, located on the sides of the front bumper. The rear part of the car, where new lanterns with LEDs and a bumper appeared, was also modernized. According to the new branding policy, the image of a cat on the stern has become larger and has lost its accompanying signature. For a surcharge, a body kit is offered. 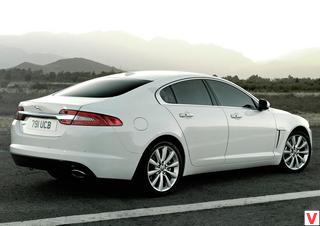 Became better XF and inside. Another steering wheel appeared, the instrument board changed. Black keys on the center console instead of silver. All inscriptions and symbols on them turned from transparent to white. It may look less stylish, but much more convenient to use. The marking of all the tools has become more contrast and better read. The turquoise backlight has been preserved, but now even under the direct light of the instrument scales and pictorgs on the keys do not fade.

Massive front seats have more developed lateral support than before. In the basic configuration, the back of the back sofa is screwed tightly, and for a surcharge it consists of two unequal parts. In the Russian market, the model is offered in 4 possible trim levels: Comfort, Luxury, Premium Luxury and Portfolio. Comfort Jaguar XF is represented by climate control, cruise control, power accessories, many electric adjustment, on-board computer, navigation system. The 1200-watt Bowers & Wilkins music system is in the list of options. In Russia, the Jaguar XF is offered with one of several power units: 3.0 V6, 3.0 D V6 / 275 hp.

and 5.0 V8 / 510 hp. All modifications are aggregated by a 6-speed automatic transmission. The engine capacity of 5.0 liters is installed only on the most expensive equipment Portfolio. In addition, the Jaguar XF will be sold in Europe with a new 2.2-liter diesel engine with 190 hp. (torque equal to 450 N • m). This motor is paired with an eight-speed automatic. The automatic transmission is designed to meet the characteristics of the diesel engine and maintains low engine speed, which has a positive effect on fuel efficiency.

According to representatives of the Jaguar with a 2.2-liter diesel engine accelerates from 0-100 km / h in 8 seconds, and the maximum speed of the model is 225 km / h. It is quite a decent performance, especially considering that the average fuel consumption of a car with such an engine is only 5.4 liters per 100 km. The suspension and steering of the new XF are reconfigured in order to get maximum driving pleasure.