In 1998 (exactly two years after the debut of the Jaguar XK8 model), the British introduced the Jaguar XKR coupe and convertible. The debut took place at the Geneva Motor Show. From the “regular” version of the XK8, the powerful Jaguar XKR outwardly differed in two oval air intakes on the hood, a developed front spoiler, new 18-inch wheels, a different design of the false radiator grille. Major changes - under the hood. Jaguar XKR sedan and convertible equipped with a new engine model AJ-V8.

Eight-cylinder engine working volume of 4 liters develops 370 liters. from. and allows the car to move at speeds of up to 250 km / h (maximum speed is electronically limited). Up to 100 km / h XKR accelerates in just 5.4 seconds.

The debut of the XKR is timed to the 50th anniversary of the Jaguar XK series cars. Over time, XKR first years of release is hopelessly outdated. Competitors quickly moved forward. The company Jaguar began serious work on the change of generations. The result of labor was the second generation XKR.

Appearance has retained the true English style, seasoned with sports touches. Predatory front with aluminum nets, huge air intakes. Behind - as many as four exhaust pipes, diffuser, elegant spoiler on the trunk. Without a roof, the XKR looks aristocratic, somewhere even poetic, and when the top is in place, there is a bit of sportiness in its image. Under the hood placed a 4.2-liter V8 whose power, thanks to the compressor, was increased to 420 hp The engine is aggregated with a 6-speed automatic transmission Sequential Shift with the ability to manually control the steering column levers. 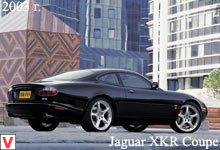 According to representatives of Jaguar, gear changes occur 400 ms faster than conventional automatic transmission, which reduced the acceleration time from 5.4 seconds to 4.9 seconds. But the maximum speed remained traditionally limited to 250 km / h. Increasing engine power required changes in the configuration of the CATS (Computer Active Technology Suspension) active suspension and Trac DSC dynamic stabilization system, as well as an increase in the effectiveness of the braking system. Basic equipment includes 19-inch wheels (20-inch wheels are available on request). The basic configuration is very rich. 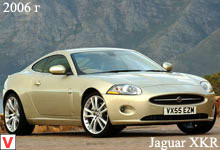 Additionally, you can install a more advanced audio system, Keyless Entry system, tire pressure sensor. There are also various trim options and more. The German tuning studio Arden, known for its modifications of the Jaguar cars, presented a new sports package for the Jaguar XKR coupe, dubbed AJ 20. This package includes the aerodynamic body kit and a major engine upgrade. Arden specialists have increased the volume of a standard eight-cylinder petrol engine with a mechanical supercharger from 4.2 to 4.5 liters, and also installed a special crankshaft, pistons and connecting rods.

In addition, the tuning Jaguar XKR received a new exhaust system. As a result of such changes, the power of the standard motor increased from 420 to 480 horsepower, and the maximum torque increased by 80 Nm from 560 to 640 Nm. The maximum speed of such a car is 305 kilometers per hour. 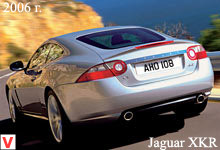 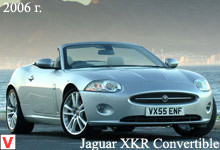