In the E2 segment (premium business class), where competition between manufacturers is particularly high, Jaguar has been offering a rear-wheel-drive S-Type sedan, designed on the Ford LS1 platform, since January 1999. The car has been waiting for a long time. His creation has been closely watched since he was known only under the dry factory designation X200.

However, the S-Type (“type S”) also doesn’t sound very romantic, but brand lovers know that there already was a car with this name in the Jaguar range. In October 1963, at the London Motor Show, the public first saw the Jaguar S-Type. Externally, the car was very similar to the model Mk II, a modification of which, in fact, was. Created it in order to fill the "market gap" that existed between the Mk II and the top model Mk X. 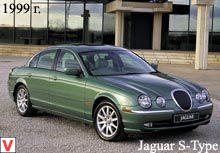 The development of S-Type spent $ 680 million. Half of the amount went to the modernization and expansion of the plant in Birmingham. This is the first Jaguar plant to complete the entire production cycle, from body stamping to final assembly. Drive at the S-Type naturally rear.

Box - 5-speed automatic. There is a system of exchange rate stabilization. Suspension settings match the sporty spirit of the car. In the list of options there is a sports package - electronic suspension control (CATS), 17-inch wheels and tires of category Z. The line of power units offered two engines. The first is a 4.0 liter V-shaped AJ-V8, the same as on the XJ sedan and coupe and XK convertible, with a slightly reduced power (281 hp). This engine accelerates the S-Type to hundreds in 6.6 seconds. Maximum speed (with sports package) - 240 km / h. 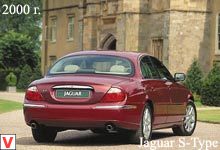 The second engine - a 3.0-liter V-shaped AJ-V6 six, based on the Ford Duratec engine, develops 240 hp of power. Acceleration - 8 sec., Maximum speed - 208 km / h (with a sports package - 225 km / h). Jaguar S-Type is not only a sports car, but also a luxury car, therefore it is equipped and equipped accordingly. Traditional leather and wood; navigation system and telephone; heated windshield and precipitation intensity sensor; obstacle detection system when reversing. The voice control system offered for the S-Type as an option has become a real know-how. Made her company Visteon Automotive Systems. Press the button on the steering wheel - and you can command.

The difference between the Visteon system and others is that it recognizes speech regardless of accent or dialect, and the user can speak fluently without choosing pre-learned phrases and without making artificial pauses between words. In 2003, the updated Jaguar S-Type appeared. The contours of the new hood (made of aluminum) have become more pronounced. The car also received a new grille. The rear part turned out higher and heavier. In addition, new taillights and a decorative spoiler on the trunk lid. The most significant changes occurred inside the cabin. 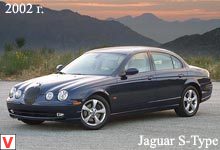 The panel of the modified version of the S-Type looks flawless, as it is made exactly according to the native Jaguar sketches. The interior boasts wooden inserts and expensive upholstered in soft leather. And the navigation system (which is installed as an option) has a convenient touch screen. An innovation is the electronic parking system, the sensor of which is installed in the transmission area and automatically activates the brakes if there is a danger of a collision during parking. The new version of the car received a 4.2-liter, 32-valve V-8 engine with a capacity of 400 horses, which allows it to accelerate from its place to a speed of 100 km per hour in 5.3 seconds.

It is not surprising that with such power the car is equipped with sports seats with additional rollers, providing lateral support for the back of the driver. The car feels great on winding roads and confidently enters the sharpest turns at high speed. The following engines are also installed on the S-Type: base 2.5 liter V6 24V (201 hp) and a turbo diesel CR 2.7 liter V6 24V (206 hp), a joint development of Ford and PSA, intended mainly for European market. Engine power is transmitted to the wheels through a 5-speed manual gearbox or the latest 6-speed automatic gearbox (which, by the way, is first installed on the Jaguar). 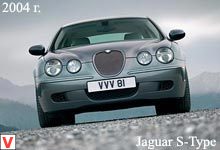 The only drawback of the steering system is that at high speeds the steering wheel becomes “sensitive” to the state of the road surface, although there is no unpleasant sensation of shaking or vibration. The steering wheel itself is slightly larger than usual and very pleasant to the touch. The body of the S-Type was not 10% tougher than before, which has a positive effect on the course and control of the car and increases the safety of the driver and passengers. And the body weight has become less by several kilograms due to the use of aluminum. The suspension includes many aluminum parts, which can significantly reduce its weight. 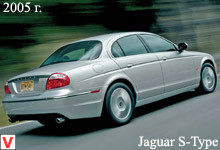 Despite tough shock absorbers, the S-Type suspension is still much softer than its competitors. Perhaps it will disappoint fans of hard sports suspension, but this suspension provides a comfortable ride, reduces shaking on rough roads and reduces body roll on sharp turns. About the S-Type 2003 model year, it is safe to say that it is luxurious, attractive and, most importantly, made in the Jaguar style. Body lines of the S-Type 2008 model year are close to the retro style, which, along with the luxury of the interior, according to experts, will somewhat expand the target audience of the series. This car has a lot of hope - it should help Jaguar to significantly increase sales.

It is noteworthy that one of the working titles of the novelty was the XF, and it was assumed that this sedan might become a fundamentally new car in the Jaguar lineup. However, the 2008 model will still be a completely updated car of the S-Type family. The new sedan has four trim levels: Spirit, XS, SE and R. 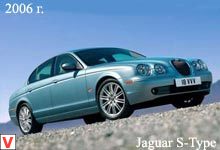 The simplest of them, the Spirit, is equipped with two engine options: a diesel engine capacity of 2.7 liters and a three-liter gasoline engine. In addition, the standard package includes a six-speed automatic transmission. Modifications XS and SE have the same options for power plants, as the Spirit. Most likely, the XS model will replace the existing S-Type Sport. The three-liter version of the XS in combination with an automatic box has a sport-tuned suspension. The powerful version of the R has the largest engine in the model range - petrol V8 of 4.2 liters with a turbocharger. In general, it can be noted that the car looks more dynamic and does not lose its elegance.

All models received a sports bumper and a new grille. The color scheme of bodies remained unchanged, except for the R-version. It will receive a new fiery emerald hue, which, according to the designers, conveys the spirit of the technical “charge” of the car. The interior style of the cabin has noticeably lost the idea of ​​classicism Jaguar, but it became multifunctional and acquired a more modern look. 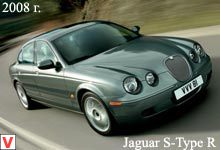