The first generation Subaru Impreza sedan and wagon modification debuted in 1992. Later, in 1994, they began to produce an exclusive Impreza with a coupe. The car has occupied a vacant niche between Subaru Legacy and Subaru Justy. At first, the authors of the project Impreza had one task - to make such a serial car that would become a reliable "base" for participation, and possibly, for victory in the world WRC rally championship. Thanks to the efforts of the designers, the car turned out bright and unusual, and it was this super-individuality that became the trump card that allowed the Subaru Impreza to establish itself in the market and win the recognition of customers.

Stylish body design looks great to this day. The interior is rather austere, mainly because of the abundance of plastic, but the build quality and fit of materials covers this drawback. The interior is not too spacious, but the ergonomics of the driver’s seat are close to perfect. 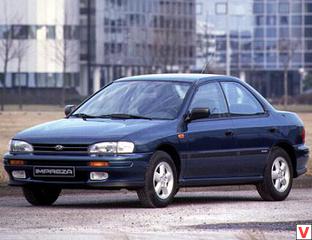 from. - fully met the needs of people who purchased Subaru Impreza for family use. At choice: 5-step “mechanics” and 4-step “automatic”. At the same time, the Impreza WRX category developed in parallel, equipped with a two-liter turbocharged engine with a capacity of 155 hp. 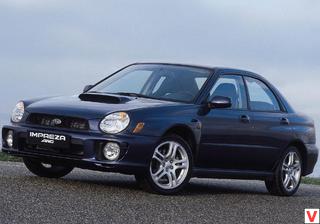 and 4WD, aimed at sports enthusiasts. Compared with the base model Impreza, the WRX installed wider low-profile tires, improved brakes and a reinforced suspension. Front and rear wheels were equipped with ventilated disc brakes. Gross vehicle weight was 1220 kg. The suspension of the extreme version is much tougher than on civilian modifications, but it is also much stronger. And the lack of comfort is compensated by tremendous handling and stability at extreme speeds. As the model developed, there was a rejection of the family complete sets, which included Impreza with engines of 1.8 and 1.6 liters.

They were replaced by models with a two-liter engine. As for reliability, here Impreza will not disappoint you, since all units are hardy enough. Bodies are almost not afraid of corrosion, because they are galvanized. Until 1999, there was not a single complete change to the Subaru Impreza lineup, only a partial restyling of the body took place. In 2000, the second generation debuted. The Impreza WRX in the sedan began to be equipped with a 250 hp turbocharged engine. and engine with a natural intake type of 155 hp For real fans of this brand, the Subaru Impreza WRX STi was also released in 2000 with a 4-cylinder horizontally opposed engine of the EJ20 brand. 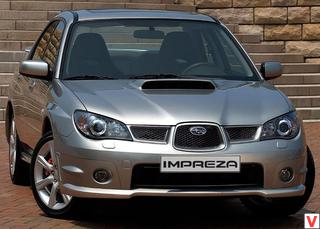 He developed 280 hp with a torque of 38.0 kg / m. This car was completed with a 6-speed manual gearbox with close gear ratios. The Subaru Impreza WRX STi was shod with 16-inch tires. Large intercooler, independent suspension, Brembo brake system, etc. provided the car excellent driving performance. The all-wheel drive system "consisted" of a central differential and limited slip viscous coupling (Limited Slip Differential). In 2002, the car has undergone another minor update of the model range, and, of course, the Impreza in the STi version has only become better. The engine has been improved: increased torque.

In addition, the car in the configuration Spec C "shod" in 17-inch tires and equipped with all-wheel drive system with electronic control. The second generation, in turn, can be divided into two versions: dorestayling and postresting. They differ only in details, and the most impressive was the front end of the Impreza, more precisely, the front optics. The fact is that in 2002, the Subaru factory rally team received a number of complaints about the “stylish rounder” of the headlights. The form of such optics did not allow to place in itself racing lamps, searchlights for better illumination of the track at high-speed sections with poor visibility. 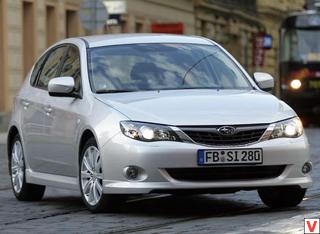 There were also serious grievances on the front end aerodynamics. The wishes were accepted, Subaru specialists worked thoroughly on the machine, installing new, not less stylish block headlights instead of “round”, and tweaked the front aerodynamics. In general, the technical stuffing of two generations of Impreza is practically the same, the modifications remained almost the same, only by changing their name.

As for the types of engines, gearboxes, suspension geometry - all this was transferred from the old to the new generation with only a small modernization. The third generation Impreza appeared on the Japanese market in 2007 and was initially represented only in the hatchback body. The model was equipped with a 1.5-liter DOHC engine producing 107 hp. either a 2-liter SOHC with a capacity of 150 hp, the first one being available in combination with a 5-speed manual or 4-speed automatic, and the last one only with a 4-speed automatic. The car was offered as a monoprivodnom and all-wheel drive version. In 2008, based on marketing considerations, a sedan was added to the Impreza body line.

The car was distinguished by increased comfort, new design of the grille, chrome-plated trim elements and made the overall impression of luxury. The extended wheelbase has allowed to increase the rear passenger space, and thanks to a new suspension, the trunk volume has increased. The doors began to open wider, in particular the rear doors now open at 75 °, which increases the practicality of the car. For the first time, the Impreza has framed side windows installed on the doors, contributing to greater noise insulation.

Thanks to the independent suspension on double parallel A-shaped levers, the amount of luggage increased. And in the sedan and hatchback appeared separate folding rear seats 60/40. The hatchback in the basic configuration has a rear spoiler and is 160 mm shorter than the sedan. Traditionally, the model received a brand symmetrical all-wheel drive.

The “charged” version of the WRX received a 2.5-liter turbo engine with a capacity of 230 hp. The engine was significantly improved: the amount of harmful emissions was significantly reduced. This atmospheric overhead camshaft engine received a new intake system, as well as a new type of catalytic converter. The top version of the Impreza received a new six-speed manual gearbox. The WRX STI model has an even more powerful engine, unique mounted aerodynamic elements, improved suspension, eighteen-inch light-alloy wheels, Brembo braking system, CD changer, pronounced sport seats and Alcantara upholstery.

The STI model is equipped with the SI-drive system, three engine operating modes, an electric throttle valve. Options are two packages for the WRX. The BBS package includes BBS wheels and headlights, the BBS and Navigation package also includes a navigation system (replacing the usual CD changer), an onboard computer and Bluetooth. Under the hood of the Impreza WRX STI is a turbocharged 2.5-liter DOHC with a capacity of 300 hp. at 6000 rpm, which is paired with a six-speed manual transmission. In the basic configuration, the car is equipped with two front and two side airbags, as well as inflatable curtains. A crash-proof pedal assembly is installed on all versions.

In the majority of complete sets the system of dynamic stabilization (VDC) is installed. In 2010, the Subaru Impreza family experienced a restyling, getting a new false radiator grille and a modified front bumper. Namotor-Show New York held the premiere of the updated “charged” version of the WRX STi and the WRX version in the sedan.