The appearance of this model was preceded by the debut of the Impreza XV. A year later, the Japanese manufacturer dramatically improved the model, giving it more off-road qualities, and singled out XV into an independent model, removing the Impreza prefix. The Subaru XV series model was introduced in Frankfurt on September 13, 2012. The car became much larger and more brutal than the Impreza XV. It is based on the Impreza platform, but the crossover is much larger than the hatchback in size.

The length has grown to 4.45 meters, the width to 1.78 meters, and the height to 1.57 meters. The wheelbase of the car is 2635 mm. Complements the picture of high ground clearance (22 cm). Subaru XV is a crossover that combines outstanding appearance and functionality. The exterior is made in the corporate style of the brand. The aggressive look of the front part of the car, which has become a firm grille in the shape of a hexagon with chrome-plated “wings” and headlights of intricate geometry, attracts attention.

Japanese designers and engineers managed to harmoniously combine the off-road practicality of the crossover (with its short overhangs, bumpers raised upwards and a plastic body around the perimeter) and sporting spirit (expressed in a large angle of inclination of the windshield, a sloping roof shape flowing into the rear spoiler). Developing the interior, the Subaru specialists did not become wise, in connection with which, the XV almost completely repeats the interior of the Impreza hatchback. In short, the interior of the car is very banal.

In the center of the dashboard is an information display that displays data on the work of the main components and assemblies. The central console received a large color touch, embodying the functions of the navigation system and multimedia center. This is also projected image of the cameras outdoor review. The luggage compartment can not be called spacious, just 310 liters. Saves the fact that the rear sofa folds into a flat floor, which increases the amount of luggage up to 570 liters. You can restrict the folding of only one half of the sofa. The model has exceptional driving characteristics and economical fuel consumption. 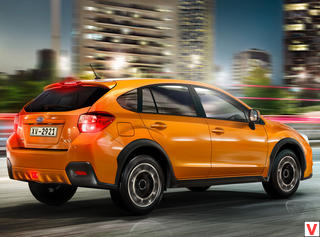 The range of engines consists of three units: two gasoline volumes of 1.6 and 2.0 liters with a capacity of 115 and 150 hp. respectively, and a 2.0 liter turbo diesel with a capacity of 147 hp. The latter is distinguished by high rigidity, smoothness, low weight, compact design, quick response to pressing the accelerator pedal with high torque even at low crankshaft rotational speeds, low carbon dioxide emissions and increased efficiency. A car with a 2.0 liter gasoline engine develops a maximum speed of 187 km / h, and with a turbo diesel engine - 198 km / h, and equipped with a 1.6 liter - 179 (175 - for the variator) km / h.

For the Russian market Subaru XV is offered with two engines, a volume of 1.6 and 2.0 liters, with a capacity of 114 and 150 horsepower. The first one is offered in a pair either with a 5-speed manual gearbox or with the stepless Lineartronic variator, the second engine either with a 6-speed manual transmission or with the same Lineartronic. The new stepless variator Lineartronic is, according to representatives of Subaru, "innovative engineering development". The main feature of the variator is the installation of a chain for the transmission of torque between the two pulleys of the variator. This solution made it possible to increase the efficiency by about 5% compared to the belt design. 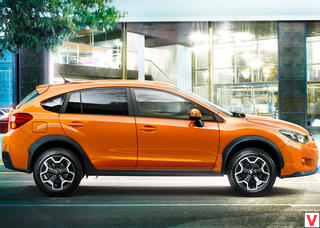 In addition, by optimizing the position of the shafts and other main internal components, the infinitely variable transmission was more compact and lightweight, which led to an improvement in all the main indicators: reduction of fuel consumption, improvement of smoothness and feedback. Front stand MacPherson, rear - double wishbone. Disc brakes are installed on all four wheels, with the front pair being ventilated. Naturally, there is a proprietary system of symmetrical all-wheel drive AWD. Depending on the transmission, the basis of all-wheel drive is either a multi-plate clutch with electronic control or a viscous coupling with a center axle and a limited slip differential.

In cars with a variator used multidisk clutch with electronic control, distributes torque in the proportions of 60:40. The transmission control unit responds to driving conditions, such as acceleration, uphill, turn, and adjusts the torque distribution between the front and rear wheels in real time. The model has a high level of security and received the maximum rating of "5 stars" in the framework of the tests of the European program for the evaluation of new cars (Euro NCAP) in 2011. The use of high tensile strength steel sheets in the body frame resulted in a reduction in weight.

This model has one of the lightest bodies in its class, and offers classic strength, in particular, increased flexural rigidity. The inclined panel for the driver’s feet is made thicker than other previous models, in order to increase its strength and protect the driver from pedaling backwards in the event of a collision. At the base of the front pillar, reinforcing elements are used to increase the strength of the connection between the pillar and the upper frame. This ensures that the impact energy produced in a frontal collision effectively passes from the frame to the rack. This feature offers a high level of security in terms of crash protection.

In the sidewalls of the car used high-strength elements, where there are few deformable zones. This helps minimize body deformation in the event of a side collision. The rear part of the chassis is designed so that the collision energy from behind with the displacement is evenly distributed to the left and right by the diagonal elements, helping to minimize the deformation of the cabin. In accordance with the new Euro NCAP protocol, Subaru has increased the foamed energy-absorbing element and the lower central bumper bracket.

Inheriting the new design of the Subaru Legacy model seats, the seats are designed to limit the severity of neck injuries and gently direct the movement of passengers in the event of a collision. About the airbags, the developers also did not forget - in the Subaru XV their complete set: front, side, curtain, driver airbag protection airbag. Moreover, the front cushions have a so-called double structure - a fold in the center, so that the passenger's neck is subjected to less impact when opened. But that's not all: the front cushions open first in width, and then in volume, which eliminates the possibility of a person's head sliding to the side during its opening. 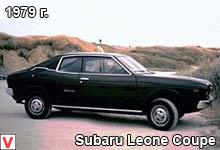