The Subaru BRZ is a compact rear-wheel-drive sports coupe developed and produced jointly by Subaru and Toyota. The official premiere took place at the Tokyo Motor Show in December 2011. Both companies bring the car to the market under their own brands, so, in addition to sales of Subaru BRZ worldwide, the same car will be sold as Toyota 86 in Japan, as Toyota GT 86 in Europe, and also as Scion FR-S in America. The differences between cars, except for nameplates, are minimal and lie in the exterior: different radiator grilles, front bumper, slightly different headlights, as well as decorative “gills” on the wings, which Toyota does not have.

The abbreviation BRZ stands for: (B) oxer (R) ear-Wheel Drive (Z) enith. The pride of engineers is the engine and its location. In pursuit of excellent handling and cornering stability, the engine was set as low as possible and shifted as close as possible to the center of the body. To do this, many of its components had to be reworked (for example, the intake manifold was deployed, the crankshaft was lowered, the radiator was tilted). The result is an exceptionally low center of gravity, only 460 mm and the weight distribution between axles is 53:47. 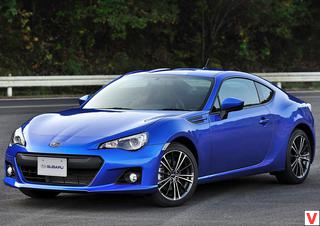 The whole platform of the car was created under this layout. I even had to develop a new crankcase to maintain ground clearance. Low weight was also a priority. And here the designers coped with the task: the weight of the BRZ in the modification with the “mechanics” was only 1202 kg. If Subaru was responsible for the chassis, then the exterior design was made by Toyota specialists. The car is small - 4240 mm long and 1775 mm wide with a wheelbase of 2570 mm. Low hood Subaru BRZ allowed to highlight the wings, making the body more rapid, as well as lower the line of windows.

With a car height of 1285 mm, the glazing area is one of the largest in the class. The coupe is distinguished by stylish contours, short overhangs and predatory optics. The claimed layout is “2 + 2”. However, it is impossible to take the rear seats seriously.

There are more places for children with Isofix attachments. Subaru BRZ - a machine designed for one person - the driver. Salon ascetic. The interior design in many ways indulges the racing ambitions of the owner. The front panel is simple and stingy - a tribute to sports cars. From the same place - the center of the tachometer with built-in digital speedometer on the dashboard. On the "beard" - control of the air conditioning system and some additional functions. The driver and front passenger seats are separated by a high tunnel.

On the tunnel - gearshift lever and handbrake handle. Landing in a sports low, seats with developed lateral support. No elektroregulirovok seats not provided even in the maximum configuration. The three-spoke steering wheel has a diameter of only 365 mm. The trunk volume is small - 243 liters. You can increase the trunk space by folding the rear seats.

Since the backs of the rear seats are slightly smaller than usual, they add up to a flat floor. The engine is a two-liter inline-four. Contrary to the usual turbocharging engines for sports cars, the Subaru BRZ engine is aspirated. Its power 200 hp, the moment - 205 Nm. The direct injection system D-4S went to the motor from Toyota.

The engine can be completed as a manual transmission, and "automatic". Both Aisin six-speed gearboxes. The dynamics declared by the manufacturer is 7.6 seconds to "hundreds" with manual transmission. Passport acceleration with the "automatic" more than six tenths of a second. Engineers pride themselves on extremely low CO2 emissions: just 159 g / km. Suspension Subaru BRZ - typical for rear-wheel drive cars. Front strut - MacPherson with shorter shock absorbers.