In 2003, the Grandis replaced the outdated monotonist Mitsubishi Space Wagon, but did not become its direct replacement, since the image, concept and positioning of these cars differ significantly. The car is made in the new corporate style of the company, developed by a team of designers under the direction of Olivier Boulet. Mitsubishi designers managed to award a trivial family minivan with an extraordinary look.

Exterior Grandis - a combination of harmony and dynamics. Headlights-arrows, almost from a cowl length, in a sporty, swift silhouette, a garland of fashionable LED lights around the perimeter of a huge rear window - all this looks stylish, modern and creative. Two concept cars became the prototypes of the Grandis: the chic MPV Space Liner and the incendiary monocab CZ3 Tarmac. Their car borrowed the highest level of comfort inherent in the first and the emotional sporty character of the second.

Mitsubishi Grandis - is a full-size minivan, which is designed to expand the understanding of the car class MPV (Multi Purpose Vehicle). Mitsubishi designers managed to create an emotional, memorable image of a new car, and a stylish and thoughtful interior helped preserve the traditional for this class spaciousness and versatility. Grandis is lower than most of its classmates, but at the same time it has a large wheelbase (2830 mm) and a wide gauge (1550/1555 mm). Thanks to this combination, the car has elegant proportions, which favorably distinguishes it in city traffic.

Buyers will be offered options with 7-seater (one-piece second-row seat) and 6-seater (separate second-row seats) cabin. At the same time, regardless of the version, the second row has a huge number of transformations for the most rational use of internal space. The second row seats are equipped with a large number of adjustments: in the 7-seater version they fold up in the 40/60 ratio, for separate seats there are provided reclining armrests, the Relax Mode system allows you to change the angle of the seat cushion and take the most relaxed posture. It is noteworthy that the third-row seats fold into underground niches, forming a large luggage compartment with a flat floor. 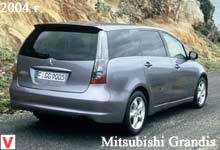 Thus, if it is necessary to transport large items, the third-row seats do not need to be removed and stored separately. Additional comfort and coziness are created by such interior details as folding reading tables installed on shock absorbers, a double glove box, lockable compartments on the front panel and in the third row seat area, an underground niche, as well as a lot of cup holders and all kinds of holders without which we do not think minivan. Particular attention in the design Grandis paid passive safety.

In the design of the power structure of the body applied technology "RISE" ("Reinforced Impact Safety Evolution" - enhanced protection against impact). It allows, during an impact, to control the relative position of the power elements of the body, providing active protection for the occupants of the cabin during a serious accident. This system is complemented by front and side airbags for the driver and front passenger, inflatable curtains, front seat belt pretensioners with chest force limiters, special front seats limiting the longitudinal movement of the body during a frontal collision, seat cushions and head restraints that protect the neck from damage during reverse. 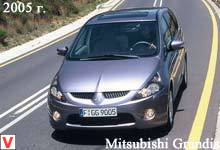 The minivan's inherent Grandis architecture provides the driver with a high fit and good panoramic visibility. This situation, firstly, increases traffic safety, allowing the driver to better navigate the traffic flow, and secondly, it facilitates the entry-exit process. Over head space is more than enough, the triangular windows on the sides of the dashboard facilitate visibility when parking, and the center console ends almost at the front bumper. The interior trim was made with high quality, the creators managed to create an atmosphere of coziness and comfort in the cabin: nice plastic, stylish aluminum inserts, non-trivial panel design.

Semicircular center console, a stylish ashtray, comfortable armrests and door handles. All elements of the interior are thought out from the point of view of both design and ergonomics. Grandis has independent suspension of the front and rear wheels, and, on the rear axle, a scheme is applied that minimizes the effect of vehicle loading on handling and stability. All wheels are equipped with 16-inch disc brakes (ventilated at the front and solid at the rear). All models come standard with ABS with EBD (brake force distribution system). 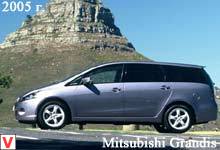 On the top versions, MATC (Mitsubishi Active Traction Control - active traction control system) and MASC (Mitsubishi Active Stability Control - proprietary dynamic stabilization system) systems are available that allow you to maintain control over the car even on slippery roads. As an option, it is possible to install 17-inch alloy wheels. The Grandis is fitted with a state-of-the-art 2.4-liter four-cylinder 165-hp MIVEC engine (Mitsubishi Innovative Innovative Valve Lift and Timing Electronic Control is a proprietary system for changing the phase and lift height of electronically controlled valves).

The MIVEC system not only provides excellent throttle response and high torque in a wide rpm range, but also gives the Grandis excellent driving qualities. This power unit is completed with an automatic gearbox INVECS-II. Especially for European buyers, Mitsubishi has developed a diesel modification Grandis, which will appear later. The Japanese opted for the 2 l Volkswagen engines. The unit has a capacity of 136 hp and due to the high torque (310 Nm), it is hardly inferior to the 165-horsepower petrol version. Representatives of the company promise acceleration from zero to 100 km / h in 10.8 s and a maximum speed of 197 km / h. Grandis - a modern car for a friendly family. 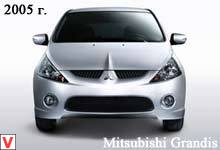