In March 1980, at the Geneva Motor Show, the debut of the all-wheel drive sports coupe Audi Quattro, which was destined to turn the global automotive industry, took place. For the first time a passenger car was offered with the concept of a drive, previously used only in trucks and SUVs. The idea of ​​such a car originated in the winter of 1976/77. during test runs on the developed army off-road vehicle VW Iltis. The excellent behavior of this car when driving on ice and snow led to the idea to introduce the VW Iltis four-wheel drive in the serial Audi 80, and the engine with turbocharging and intermediate cooling borrowed the Audi 200 sedan.

In the same year, experimental work was carried out easy, fast car class "Gran Turismo" with excellent stability called Audi Quattro ("four" in Italian). Competitors to the idea of ​​creating a four-wheel drive passenger cars were skeptical. Many critics did not believe in the success of all-wheel drive rally cars, because they believed that they were too heavy and difficult to build. However, success in the sport brought the Audi Quattro popularity. 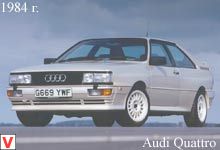 Interest in it fueled and advertising stunt, when the car climbed the ski jump! For several years, there was a debate about whether it was rigged, and whether the winch dragged the car. To convince all skeptics, the rise was repeated. The sports debut of the model took place at the beginning of 1981 at the January rally in Austria. The sporting achievements that followed brought fame to the car, which was not subject to time. From 1982 to 1984, Quattro won four rally championship titles.

Following the success in sand and gravel racing, the circuit racing program was launched, and the quattro concept once again proved its superiority: Audi pilots won the most prestigious prizes in the USA and Europe. Coupe instantly became a bestseller, but was produced in very small quantities. During the period from 1980 to 1991 about 11452 pieces were produced. Of course, this contributed to the maintenance of exclusiveness around this halo model. It is noteworthy that the car is known by various names quattro, turbo quattro coupe, but the most accurate is, perhaps, Ur-quattro, which can be translated from German as "real" quattro. 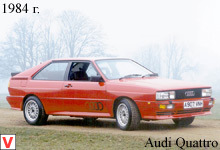 Various Audi Quattro models had additional designations related to engine codes and distinguishing between early and late versions. The first models had a 10-valve engine with a volume of 2144 cm3, which was called WR, a 10-valve engine with a volume of 2226 cm3 was called MB, and the later 20-valve engine was called RR. So the Quattro models began to be designated WR Quattro, MB Quattro and RR or "20 v" Quattro, respectively. Without exception, the Audi Quattro completed only 5-speed manual gearbox. The maximum speed of serial copies reached 250 km / h. The transmission initially had three free differentials with forced locking of axle and rear differentials.

Until May 1981, the lock actuator was purely mechanical, after which the pneumatic drive scheme was used for some time, which after August 1984 underwent some modifications and lasted until the end of the release of Quattro I. Since August 1987, Torsen was installed instead of the free center differential. a manual lock was maintained, which was turned off at speeds above 25 km / h. Over the 11-year release period, the appearance of the model has not changed much. In 1983, they began to use the combined headlights with double reflectors, and in the instrument panel of the car, the analogue measuring instruments were replaced with an LCD display.

In 1985, the Quattro model was again modified: a new inclined grille, headlights and a modified car badge were installed. For the RR 20 v Quattro model, a new design steering wheel was used, which consisted of three spokes. Updated interior: installed a new dashboard, changed the design of the steering wheel and the appearance of the central control system, redesigned dashboard switches. 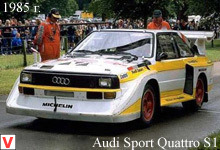 In 1984, they launched Quattro Sport with a 320 mm shorter base. The bodywork of the Quattro Sport included special Kevlar carbon inserts, wider wings and wheels compared to the Quattro, as well as a less flat windshield (at the request of riders of the Audi Sport rally team to improve visibility). Under the hood, a 2.1 L (2133 cm3) 20v DOHC engine with a power of 355 hp (257 kV).

In 1985, the second evolution of the Sport Quattro, known as the S1, introduced the world to a more brutal and extreme Audi racing coupe. From the production model Quattro left only a few memories and individual touches, like a recognizable front end with grille and headlight rectangles. At that time, the creators of S1 paid the most attention to achieving close to perfect weight distribution along the axes. The final balance at 52:48 was obtained after the transfer of radiators and a generator to the back of the car. A new engine of 2110 cm3 and 444 hp was installed on the S1. The model immediately debuted successfully at rally competitions.

Pilots Walter Röhrl and Christian Geistdörfer, the managers of the Audi Sport Quattro S1, won the 1985 San Remo race. In the same year, Michelle Mouton, who ran the modified version of S1, won the Pikes Peak International Hillclimb competition, setting a time record. Production of the model continued until 1991. Gradually, the quattro drive was also offered for other Audi models. Today quattro is a whole family of all-wheel drive cars and one of the main concepts of the brand. Thanks to constant technical improvement, the reputation of the all-wheel drive transmission is as high as ever.