Audi S5 is a two-door coupe. This model was first presented to the public in March 2007 at the international auto show in Geneva. In the same year, its serial production began. Over the design of the car worked maestro Walter de Silva. S5 looks exemplary. The classic proportions of a coupe - and the necessary proportion of grace and grace.

Overall dimensions: length - 4635 mm, width - 1854 mm, height - 1369 mm, wheelbase - 2751 mm. The car has a stylish sporty design with a grille traditional for Audi of the S family - it is painted platinum-gray and has vertical chrome inserts. Compared to the A5, the contours of the front and rear bumpers are more pronounced, and the air intake grilles have a bolder design. Aluminum exterior mirror housings evoke an unequivocal association with the world of motor racing, as are painted sills and a double-flow exhaust system with four oval tailpipes.

Embossed spoiler on the trunk lid creates additional downforce. The drag coefficient is 0.306. Inside - the highest quality finishes and the best materials. The center console is slightly turned towards the driver. The instrument panel and the center console are combined into one unit.

Depending on the version, the S5 can be either with an MMI joystick or in a simplified version with a simpler front panel controller. Salon S5 also emphasizes the athletic character of the car. Electrically adjustable sports seats, a sports steering wheel, instrument panel with gray dials and aluminum sills create a feeling of agility and sophistication. The material of decorative inserts can be selected when ordering a car, it is possible to choose between carbon fiber, aluminum, stainless steel and wood. The car received a heaped hi-fi infotainment system - navigation, DVD, radio, TV - all from Bang & Olufsen.

The capacity of the luggage compartment is 455 liters, the rear seats fold down, so the Audi S is not without practicality. Under the hood, the S5 runs a 4.2-liter V8 FSI unit with a capacity of 354 horsepower and a maximum torque of 440 Nm. This allows you to accelerate to 100 km / h in just 5.1 seconds and reach a maximum speed of up to 250 km / h (limiter). Audi S is equipped with a 6-speed manual or automatic transmission and all-wheel drive quattro. Independent all wheel suspension, front and rear brake mechanisms - disc. Thanks to a stiffer suspension and shock absorber system, the Audi S5 has excellent handling and maneuverability on the roads at any speed.

The car has a sports steering wheel and front sport seats in leather and Alcantara. The car is equipped with all-wheel drive, and under its hood is a turbocharged engine V6 TFSI, of 3 liters, with a capacity of 333 horsepower. Together with this motor works a seven-speed robotic gearbox S-Tronic. From space to a hundred, the Audi S5 convertible accelerates in 5.6 seconds and its top speed is 250 km / h. Average fuel consumption - 10 liters (mixed cycle). In 2009, a modification of the S5 was presented in Frankfurt - a five-door sports car Audi S5 Sportback. The car is equipped with a V6 engine, the volume of which is 3 liters, and the power reaches 333 horsepower. 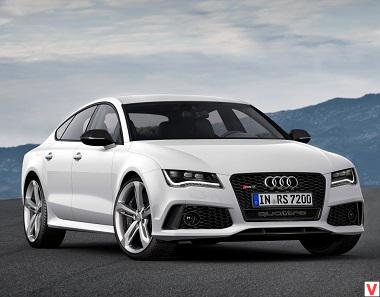