Sedan middle class Mazda Cronos debuted in the domestic market in Japan in October 1991. This car was one of the modifications of the Mazda Capella and equipped with both front-wheel drive and all-wheel drive. In the US, it was sold under the name Mazda 626. 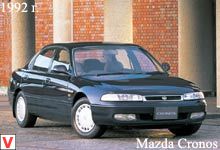 The back of the rear seat is divided in proportion of 2/3 and folds, if necessary, to increase the capacity of the luggage compartment. The basic equipment of the model includes power steering, fog lights, climate control, central locking, electric windows, a radio tape recorder and a steering column with adjustable height. Additionally installed rear spoiler and alloy wheels. On the Cronos were installed 6-cylinder 24-valve gasoline engines with electronic injection system EGI of 1.8 liters and 2 liters, 4-cylinder 16-valve 2 liters, as well as a diesel 2-liter engine.

at 4000 rpm and a solid torque of 181 Nm at 2000 rpm. Cronos with this engine can accelerate to 161 km / h. This motor is equipped with a forced intake system PWS, which allows the motor to operate without delay and smoothly respond to the accelerator pedal. Independent front suspension type McPherson, rear double wishbone, the axis of the upper and lower arms do not coincide with each other, which allows to provide the desired angle of convergence of the wheels. Clearance is 160 mm.

In May 1992, sales of the Cronos Grand Tourismo began. This model was equipped with a KL-ZE engine, which had a volume of 2.496 liters and developed power up to 200 horsepower. The design of the front suspension of this car used shock absorbers with built-in springs, as well as anti-roll bars of increased section. This contributed to a significant improvement in machine handling. Brakes at Mazda Cronos front ventilated disc, rear disc. The standard tire size is 195/65 R14 89H.