In the 70s, there was a shortage of affordable and modern sports cars on the market, and the Mazda RX-7 came in handy. This is a rear-wheel drive sports coupe - the only car in the world on which the Wankel rotary-piston engine was fitted as standard. The RX-7 (in Japan, the Savana RX-7) went on sale in 1978 as a 1979 model and was a real sensation. The first engine of this model was a rotary 12A of 1146 cm³, which worked with a 5-speed manual transmission. The engine and transmission were located on the undercarriage in such a way that the weight of the car was distributed between the front and rear axles in a 50/50 ratio.

With a relatively long wheelbase - 242 cm - the weight of the car was quite small: 1084 kg (thanks to the lightweight compact body). The engine produced only 100 hp, but he allowed the car to accelerate to 100 km / h in 8.5 seconds. Brakes front disc / rear drum, wheels R13. It is noteworthy that the cars of the first years of release did not have a rear-view mirror on the passenger side.

Stylish interior, precise operation of all devices, balanced steering - all this has earned the best reviews of critics. Specialized publications wrote that the Mazda RX-7 is the best modern sports car for $ 6,450. The model enjoyed steady demand. In the calendar year of 1978, 72,692 units were sold, and in 1979 another 71617 were sold. In 1980, the facelift was carried out. The color range has expanded, new upholstery materials have appeared, the rear bumper has received two rubber covers, the electronic ignition has replaced the contact one. The 1981 RX-7 in the GSL configuration was equipped with leather seats, power windows, cruise control, alloy wheels and had all the disc brakes.

In 1983, the model range was led by the Limited Limited, equipped with 14-inch light-alloy wheels and Bridgestone radial tires. In 1984, the Limited GSL-SE model, equipped with a 135bhp 13B engine, replaced the Limited. with direct fuel injection system. This engine accelerates the car to 100 km / h in 7.8 seconds. Seven years is a significant production time for any car. 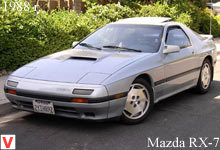 The time has come for the new generation Mazda RX-7. The second generation was launched in 1985. The manufacturer replaced almost everything except the engine. Bearing body was completely new. All models of the second generation were equipped with all disc brakes. Established a fully independent rear suspension. The base package received 14-inch wheels and 185 / 70HR14 tires, and on the GXL - 15-inch wheels and 205 / 60VR15 radial tires.

The 12A engine was no longer installed on the RX-7. All variants of the model received an injection 13B capacity of 146 horses. The standard transmission was a 5-speed manual, and a 4-speed automatic was offered as an option. In the middle of the model year, the first turbo version of the RX-7 appeared. Model RX-7 Turbo was offered only with 2-seater interior. It was equipped with 16-inch alloy wheels and 205 / 55VR16 Goodyear Eagle VR55 tires. The power of the 13B turbo engine was 182 hp Up to 100 km / h, the RX-7 Turbo accelerated in just 6.5 seconds. 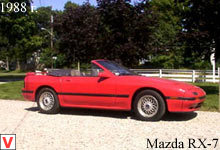 In 1988, the RX-7 convertible version was introduced. The roof could recline and rise fully or partially. The model was offered only in a 2-seater version, with a 146-horsepower engine and a 5-speed manual transmission. In 1989, the engine power was increased to 160 hp, and the turbo engine - up to 200 hp.

On the convertible, it was now possible to install a 4-speed automatic transmission. The third generation of cars RX-7 was introduced in 1991. Its characteristic feature is the 13B series motor, which was borrowed from the previous generation almost unchanged: two rotor chambers, arranged in a row, each with a volume of 654 cm³, with water cooling. The intake system includes two turbines - large and small. In other words, a dual serial turbine. Power 255 horsepower. The standard transmission was a 5-speed automatic, 4-speed automatic transmission remained an option.

To accelerate to 100 km / h, this model required, according to different sources, from 5.3 to 5.5 seconds. Thanks to the use of Double Wishbone suspension for 4 wheels, and a little later the added “Toe Control” system, the car had excellent driving characteristics. The third generation has been modified five times: in 1993, 1995, 1996, 1998 and 1999. In 1998, for example, the highest permissible engine power in Japan was reached, equal to 280 hp.

It was replaced by a model RX-8. Throughout its production history, the Mazda RX-7 has had a few limited editions. In 1992, a batch of 300 RZ cars was produced. And in 1994, the modification was presented R-II, limited to the release of 350 cars. A little later, in 1997, 700 Type RB Bathurst X series cars were produced, which had, among other things, an exclusive red leather interior. In 1997, by the thirtieth anniversary of the model, a modification of RS-R was presented, which also had a certain limit on output. In 2002, Mazda introduced the latest limited edition model of the RX-7 Spirit R.

All versions of this series had a leather-covered steering wheel and gearshift lever, power windows, an improved soft-plastic interior trim, 17 "BBS alloy wheels and red painted brakes mechanisms. Type A is the most expensive and powerful version. Motor power is limited by Japanese law and is 280 liters. from. Gearbox manual 5-speed. Number of seats - 2.

Type B is characterized by the presence of the rear seats. The power unit is the same, 280-strong plus manual transmission. Type C has a more modest engine capacity of 255 liters. from. and 4-speed automatic transmission. Mazda RX-7 Spirit R was sold only in Japan.