The Mazda RX-8 debuted in 2002. Unlike all other sports cars, the 4-seater RX-8 is equipped with a new, compact Renesis rotary engine that delivers excellent performance, improved fuel efficiency and low emissions. According to representatives of the company, the RX-8 was built around the new Renesis engine - the latest generation of Mazda rotary-piston engines.

In the 13B-REW, compared with the “ancestor” Mazda RX-7, Japanese engineers managed to reduce oil consumption by 50%, gasoline by 20% and bring the environmental parameters to Euro 4 standards. The two-section engine of only 1.3 liters turned out extremely compact. Renesis - an atmospheric power unit, when forced which engineers increased the maximum speed. But the main highlight - a complex system of inlet and outlet channels located "in the body" of the stator. Their cross section is changed by special valves depending on the speed.

This is the most powerful rotary engine without a supercharger in the entire history of the company: its power in the top version of Hi Power, endowed with a more complex intake system, is 240 hp. The manual gearbox is an attribute of both versions for Europe, with the only difference that the “hot” RX-8 has room for an additional sixth gear (with the Standard Power option, a five-speed gearbox is offered). "Mechanical" models reach speeds of up to 100 km / h in just 6 seconds. This power unit even won the title "Engine 2003". Outside, the Mazda RX-8 does not seem at all like an ordinary vehicle.

The sporty character of the model is evident due to the rear-wheel drive and the location of the engine in front of the car, as well as an uncompromising sports design. What are over-developed front fenders and a large nose-air intake. Characteristic bumper and aggressive line hood Mazda RX-8 all kind of highlight the potential of the sports car. The Mazda’s familiar 5-way grille acts as a stylish air intake.

The chassis of the RX-8 has been designed to provide a unique drive enjoyment on a sports car thanks to exceptional driving and control characteristics, as well as suppression of road noise and vibrations for a comfortable ride. The suspension here is absolutely new. In front is an independent double-wishbone suspension, and at the rear - a new multi-link system. Extended rear suspension links help maintain proper geometry and keep 18-inch tires in contact with the road all the time. The result is excellent stability, control and comfort.

Japanese engineers managed to create a bright sporty coupe with an aggressive character and sharp behavior on the road, while still being able to accommodate four passengers, which in itself is surprising for a car that looks like a standard coupe from the side according to the 2 + 2 scheme. The presence of four seats was made possible by an extremely compact rotary engine. The convenience of the rear passengers was solved by the same compact Renesis, which moved 40 mm lower and 60 mm closer to the driver than its predecessor, the Mazda RX-7. As a result, the Japanese specialist managed to move the driver's seat forward by 80 mm, increasing the space for the knees of the rear passengers.

There is still room for the luggage compartment of 290 liters. The eye pleases not only the exterior stylish design, but also the trim. A rather unusual scheme of opening the rear doors Freestyle, in which the front and rear doors open from the center of the car. The front doors open 70 degrees and the rear doors approximately 85 degrees. As well as the lack of central pillars, provides easy access to the rear seats. It is noteworthy that the lack of racks did not entail a deterioration in the safety of the car, because vertical power elements were integrated into the rear doors, which, when closing the back door, bore into the body from above and below.

Reactions to the turns of the wheel honed and sharp, the body bravely tolerates any irregularities of the roads, remaining “assembled” and solid. The whole thing is in the original design of the car: the four-seater salon is divided into two by a hypertrophied transmission tunnel, in which, apart from the universal joint (coupe - rear-wheel drive), there is also an intensifying beam “holding” the whole body. The front seats are made with skill, they have pronounced supports in the femoral, lumbar and shoulder areas. On the dashboard, the main instrument is a tachometer, and the function of the speedometer is taken over by a small digital display on the side. 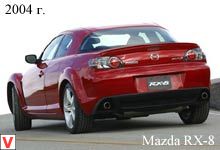 The three-spoke steering wheel comfortably fits into the driver's hands, and the gearshift lever, although too short, but its moves are clear and precise. High quality interior trim panels, stand for the left foot, excellent sound standard audio system - all these little things make it possible to conclude that worked on the interior no less than on a unique car engine. The design was thought out to the smallest detail. If you look closely, you can find a lot of amusing details: triangular notches in the backs of the seats, trimmed with metal; the original form of the parking brake lever; interesting "wells" of devices.

But as soon as the Mazda RX-8 comes into motion, the features of a beautiful body go into the background. Powerful power unit, invented by Felix Wankel, gives the car an unusual character. In a car with this character means a well-thought-out weight distribution. Here it is close to the ideal 50/50 formula, and therefore, when passing high-speed corners, there is almost no understeer or oversteer, because the engine or the full fuel tank does not hang over the front or rear axle - they are shifted to the center of the base. The wheelbase of the Mazda RX-8 is quite long - 2700 mm.

Mazda designers used the latest computer technology to provide global security, as in the case of front and rear collisions. In the security asset switchable stabilization system DSC, ABS and EBD. Plus airbags (front, side, and inflatable curtains).

Mazda RX-8 can be called a car for practical romantics. With all its sportiness, dynamism and originality, it fully corresponds to earthly realities, there is a quite spacious back seat and a big trunk - in a word, everything that a modern buyer may need.