During its rich history, the legendary model Dodge Ram (in translation - “ram”) has been replaced by several generations. The car has come a long way from the uncouth pickup for a cowboy to the refined, handsome city. The Dodge Ram 1500 has been manufactured by Chrysler since 1994.

With his appearance on the market, pickups had to make room for such monsters in this segment as Ford, GM and Chevy. At the time of its debut, the Ram 1500 surpassed its competitors not only with power, but also with its original appearance. The car was offered in two basic versions: Regular Cab (2-door) and Club Cab (4-door). Produced with both long and short wheelbase. Load capacity ranged from 529 to 1076 kg. Powertrain Magnum: 3.9-liter V6, 5.2 and 5.9-liter V8, 8.0-liter V10, and also 5.9-liter Cummins turbo diesel. The engines were aggregated with three mechanical and three automatic transmissions.

In 1997, he made his debut version of the Dodge Ram Sport with a V8 engine capacity of 5.9 liters, a modified sports suspension and sports silencer. The second generation of full-size pickups Dodge Ram 1500 debuted in 2001. The car was actually redesigned, changes were made to all elements of the design. The design plays on the theme of “neo-retro”: separate wings with an elegant wavy shape of lighting and a high hood with a powerful grille reminiscent of the famous Dodge pickups of the 50s. In the second generation, the interior of the cabin has noticeably increased in size, and the quality of the interior has increased markedly.

Traditionally, cabs were offered in two types: the regular Regular Cab and the “dual” Quad Cab. The length of the body with a short cab is 2530 mm, with a double - 1920 mm. Loading capacity of the Ram 1500 with the Quad Cab is 700 kg. There are four configurations: ST, SLT, Sport, SLT Plus. The first two grilles are painted in the color of the cabin, while the rest are chrome-plated. Dodge Ram 1500 pickups with a full weight of 2.88-2.95 t, were produced in all-wheel drive and rear-wheel drive versions.

The most significant changes occurred in appearance - the pickup received a new radiator lining, a more massive bumper and more powerful headlights, providing an increase in the intensity of the luminous flux by 22%. The interior has been improved and expanded with a list of basic and additional equipment. For the Ram 1500, as before, there were two types of cabs - a single Regular Cab and a double Quad Cab, as well as a modification of the Ram 1500 Mega Cab, which combines a two-meter body and an additional 20 inches of cab length, allowing you to comfortably seat three passengers in the back seat . 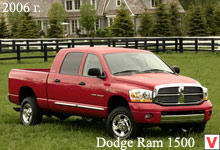 Significant changes have also occurred inside the cabin: new bucket seats, adjustable steering column and pedals, new climate system, instrument panel and center console. The list of options added to the navigation system. Other changes include a new frame made of box-shaped profiles, an upgraded front axle disengagement mechanism, a front lever-spring suspension, and a reinforced rear spring. The car offered 5 different configurations and equipment - ST, SLT, Sport, Laramie and the “off-road” version of the TRX with a rear or full (TRX4) drive to choose from. 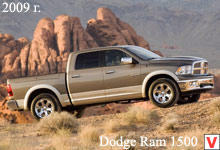 At the Detroit Auto Show, Chrysler, as part of the Dodge brand, unveiled the updated version of the giant Ram 1500 as a 2009 model. Designers made the Ram more comfortable inside, giving it attributes of premium cars, but at the same time preserved its external brutality. The new Dodge Ram is equipped with heated seats and steering, television and sound system with surround sound. In addition, in the passenger compartment of the pickup appeared a small box called RamBox (optional), as well as luggage compartments in the floor of the car, like a minivan Chrysler and Dodge. Rebuilt optics, new grille, bumpers and the increased amount of chromium is not the main thing in the updated pickup.

The designers worked quite closely on the technical part. Under the hood of the new Dodge Ram appeared a line of engines from the 4.7-liter V8 and 3.7-liter V6 engines. Diesel engine Dodge Ram will receive in 2009. It is possible that eventually the RAM will receive a 5.7-liter HEMI engine with a power of 380 hp, which can accelerate a bulky pickup to 100 km / h in just 6.1 seconds. Chassis also did not go unheeded.