The premiere of the first generation full-size SUV Durango, designed on the basis of Dacota, took place in 1997. A large 5-8-seater car has a spring rear axle and independent front suspension. In the basic version of the first years Durango was equipped with a 3.9-liter V-shaped 6-cylinder engine. In addition, it offered two more V-shaped "eight" with a working volume of 5.2 and 5.9 liters with a capacity of up to 249 hp.

After 2001, the age began to affect, and this model could no longer fully compete with numerous American counterparts of the Ford and Chevrolet brands, so the management of the North American branch of DaimlerChrysler decided to develop a new platform for the second-generation Durango. The fruit of their efforts was first unveiled at NAIAS in Detroit in January 2003 as a pre-production prototype of the Durango HEMI RT Concept, and it was announced that almost the same car would be put into mass production in the fall of 2003 as the 2004 model year. Chrysler has invested about $ 180 million in the plant specifically for the production of this car.

A unique quality control program was developed, which included 125 various inspections during the assembly process. During the assembly process, about 300 robots are “conjuring” over the new Durango, most of whom are employed in the body shop. Dodge Durango met expectations - a large, if not huge, car slightly styled as a car of the 50s of the last century, with front wings hanging over the wheel arches, slightly rounded planes of the bonnet and roof, “pop-up” optics and massive chrome grille with a cross and brand nameplate in the middle.

The need for unification with the future pickup significantly limited the scope of engineers who abandoned progressive for this class of a monocoque and fully independent suspension in favor of the time-tested frame structure and dependent rear suspension. The main changes are a new independent spring-torsion multi-link front suspension and a redesigned rear suspension with an anti-roll bar, the design of which uses coil springs instead of springs. Durango is equipped with a 5.7 liter HEMI V8 with best-in-class performance of 335 hp. and torque of 370 rpm.

Multi Displacement System allows you to deactivate half of the cylinders when the vehicle is moving at a constant speed or with a slight acceleration, which ensures the engine's fuel efficiency. The power unit is paired with a new 5-speed automatic transmission. There is also equipment with a 4.7 liter V8 (235 hp) and a 3.7 liter V6. Transmission - with permanent all-wheel drive and center differential.

In addition to all-wheel drive, rear-wheel drive models that are more affordable are launched into mass production. The NV 244 transfer box with electric gear shift is controlled by a switch handle located on the control panel. The box can operate in four modes: AWD (all-wheel drive), 4LOCK (all-wheel drive with locking center differential), all-wheel drive in low gear (4LO) and neutral. AWD mode allows the wheels of the front and rear axles to rotate at different speeds. 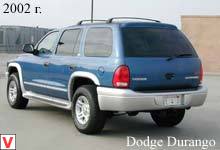 It is designed for driving on streets and roads with any kind of surface. If it is necessary to increase the cross-country ability, the 4LOCK and 4LO modes are used, in which the front and rear drive shafts are rigidly connected as a result of locking the interaxle differential, ensuring the rotation of the front and rear wheels at the same speed. The interior architecture is generally similar to the previous generation Durango - the same single visor above the instrument panel, vertical ventilation vents framing the instrument panel, massive horizontal armrests on the door panels, the "poker" of the gearbox control lever on the steering column.

However, the interior microdesign is modern, in the technological key, which is additionally emphasized by brushed aluminum inserts on the center console. In its center there is a large color LCD display of the navigation system and a DVD player (on the production model it is offered for an extra charge). Durango has a unique three-row seating arrangement for 7 passengers. Due to the increased wheelbase and dimensions of the car (5004x1930x1803 mm), the interior has become more spacious compared to the previous model. The seats in the new Durango are slightly lower than in the 1997 model, which provides a more comfortable passenger fit.

Behind the wheel will fit the driver of any size, regardless of height and build - the steering wheel changes only the angle of inclination, but the seat has a lot of adjustments with electric drive. For sitting in the center of the second row of seats, a new three-point seat belt system has been developed instead of two-point. In terms of equipment, Durango will not yield to any “European”. The list of standard equipment (version Limited) includes four airbags, ABS, full electric, including heated front seats, leather interior, separate air-conditioning for front and rear passengers, electric sunroof and cruise control.

Moreover, standard equipment even includes such options as fog lights, a roof rack, an automatic light system. In addition, the SUV has an excellent Infinity stereo system with 8 speakers, a six-CD changer, a subwoofer and a 384-watt amplifier. An integral feature of the Dodge Durango is an advanced security system that includes multi-compartment airbags with a passenger classification system for the front seats. The passenger classification system determines the weight of the passenger sitting in the front seat and, depending on this, activates or deactivates the front airbag.

Additionally, there are side window curtain airbags for all three rows. In addition, adjustable head restraints and seat belts for all seats are installed. Durango full load can reach 4060 kg. The capacity of the luggage compartment is also impressive: 2900 liters (15% more than last year’s model). And with the third row of seats folded, the novice even outperforms such giants as the Chevrolet Tahoe, the Ford Expedition and the Toyota Sequoia. At the Dallas Auto Show, Dodge unveiled an updated version of its Dodge Durango SUV.

The car of the 2007 model year is different from its predecessor by the new design of the front end. In particular, the SUV has a completely different plastic front fenders, a completely new hood, as well as other headlights and a slightly upgraded grille. Finally, the novelty can be found on the new front bumper with the original protective lining. In the list of equipment appeared the long-awaited system of stabilization of movement, a system for monitoring air pressure in tires and a rear parking sensor. In addition, the engineers took care to make the car more environmentally friendly.

Durango will now be equipped with a new 4.7-liter V8 engine that can run on both gasoline and alcohol (or, more precisely, ethanol E85), or even arbitrarily sweep the two fuels. Engine power is 230 horsepower. In 2008, Dodge plans to start selling a hybrid version of the Durango SUV, which will be equipped with a 5.7-liter HEMI engine, two electric motors, and a new electronic traction distribution system. It is planned that the use of such a system will reduce the fuel consumption of the car by about 25 percent.