Dodge Neon was introduced in 1993 in Frankfurt, which clearly indicated the company's desire to gain a foothold with the new car on the European market. Neon replaced on the conveyor produced since 1986, the model Dodge Shadow. The car was produced under the brands Chrysler, Dodge and Plymouth, and the differences were mainly in different emblems. By the way, under the Dodge brand they released not only the four-door Neon sedan, but also the two-door coupe, which very often has an unusual signature “Dodge” color - from the hood to the trunk lid two blue strips stretch. The coupe received a more powerful 4-cylinder engine producing 155 hp.

With him, the maximum speed of the car exceeds 200 km / h, and acceleration to the "hundred" takes 8.5 seconds. The engine is aggregated with a 5-speed manual gearbox (3-band "automatic" is available as an option). Properly tuned suspension and precise steering gave the Neon Coupe excellent running characteristics. Neon was positioned as a “golf class” car, although it could even compete in size with representatives of the “D” segment of the European classification. The design of the car made an ambivalent impression on the public. Some people liked the unusual round headlights, but some people thought this car was too "toy". Inside the neon is spacious.

According to the American tradition in the cabin a lot of various holders, pockets and cupholders. The sound signal is made in the form of two small buttons at the bottom of the steering wheel, which is not very convenient in terms of ergonomics. Trim materials do not look too rich, but in general, everything is done quite qualitatively and soundly.

Initially, the engine was only one volume of 2.0 liters, which produced either 133 hp or 150 hp And only in 1998, a second 1.8-liter engine of 116 hp appeared. In most cases, the Dodge Neon was equipped with "automatic", although there are versions with a 5-step "mechanics". Dodge Neon has an independent suspension and front and rear. This is the most favorable effect on comfort. The first generation Dodge Neon was produced until 1999, after which a new model was introduced. The second Neon has grown up a bit in size, it has become a bit more spacious, but apparently it has not changed much.

The general approach to the design and power units remained the same, but the 2-door version is no longer there - only the 4-door sedan is available. Dodge Neon has earned a reputation as a practical and comfortable car with a spacious interior, which can be purchased at a very affordable price. In 2003, Dodge Neon has undergone a restyling and got a new look: new front and rear bumpers, new optics and new rims. Also in 2003, the Dodge Neon SRT-4 sports version appeared, equipped with a new 2.4-liter turbocharged engine with a capacity of 215 horsepower. Unlike the usual Dodge Neon, the SRT-4 is equipped with a sports suspension, four-channel ABS, enhanced gearbox and 17-inch tires.

The 2003 Dodge Neon lineup consists of a basic SE version, a richer SXT, a sporty R / T and an extreme SRT-4. Standard equipment SE does not include air conditioning, airbags and ABS, tachometer. This package includes the Millennium fabric trim, 60/40 folding rear seats, a cassette recorder with an AM / FM receiver and four speakers, and small mirrors. The SXT has an air conditioner, an AM / FM / CD radio with six speakers, an electric package, automatic trunk opening, a full set of tools, lights for reading the front passenger cards, 15-inch light-alloy wheels, body-colored bumpers and moldings. 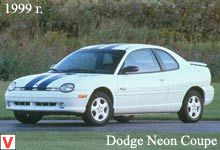 Modification SRT-4 has a special finish. The SRT-4 seats resemble Dodge Viper seats and have a reinforced lumbar and side section for better support in corners. Aluminum alloy pedals resemble race car pedals. Pressure gauge is located to the right of the toolbar, under the ledge of the torpedo. The SRT-4 grille is the reverse version of the grille of a conventional Neon. 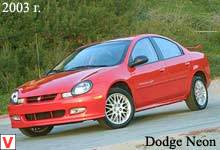 There is an aluminum intercooler behind the bottom grille - in the Dodge it is specially made visible. A functional air intake on the hood, built-in fog lights and a high rear spoiler give the car an aggressive look. A long wheelbase, a wide track and a forward displaced cabin provide a very spacious interior and have a positive effect on the driving characteristics of the car. Driver's seat is high, which provides a good overview.

The dashboard and door trim are made from high-quality, soft-touch material. The light for reading cards is built into the rear-view mirror. In terms of convenience and roominess of the rear seats, the Neon shows averages for its class. The trunk is large enough, and folding in the proportion of 60/40 rear seats, make it possible to accommodate additional cargo. In the manual transmission for Neon models, the gear ratio has been changed since 2003 to improve fuel consumption on the highway. Automatic transmission on models 2003 has also undergone changes - the new electronic control unit allows the engine and automatic transmission to better interact with each other. 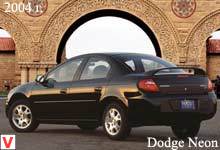 In 2005, the courageous and affordable Dodge Neon was removed from production after 11 years of life.