The wagon was a version of the sedan with an increased luggage compartment. He was 5 centimeters taller and 90 pounds heavier than a sedan. The following changes have occurred in the appearance of the car, compared to the base model: four round headlamps appeared instead of two rectangular headlamps, as well as a new chrome-plated bumper with decorative lining and a radiator grill stretched from the top down. Under the hood, the first-generation Mitsuoka Ryoga had a four-cylinder, sixteen-valve DOHC engine with a volume of 1.8 or 2.0 liters. The power of such power units was 125 hp at 6000 rpm and 150 hp at 6400 rpm, respectively. 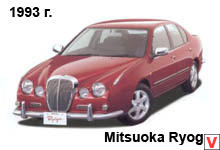 These were engines with multi-point fuel injection and water cooling system. Cars were equipped with front and rear disc brakes, anti-lock braking system (ABS), airbags for the driver and front passenger, front and rear stabilizer, power steering. All Mitsuoka Ryoga cars, except for the "station wagon" with a 1.8-liter engine, were completed with a five-speed manual gearbox. The specified wagon was completed with a four-stage automatic transmission. The car's interior was no different from the Nissan Primera. As an option, leather interior and a wooden front panel were available. All cars were equipped with air conditioning and audio system.

The steering wheel in the car was located on the right. In 2001, the second generation Mitsuoka Ryoga appeared. At this time, manufacturers have chosen Nissan Sunny as the base model. The car was produced exclusively with a sedan type body, it was decided to abandon the station wagon. The second-generation Ryoga model had only one Nissan QG15DE engine with a displacement of 1.5 liters. 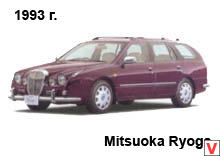 The power of such a power unit was 105 hp at 6000 revolutions per second. On this engine was installed a system to reduce the amount of harmful emissions (LEV). Acceleration from zero to 100 km / h took the car 13.1 seconds, and the maximum speed was 177 km / h.

The QG engine series is the first Nissan engines to have a complete on-board diagnostic system. The appearance of the front of the body remained the same, the rear part has changed significantly: the trunk lid has become more sloping, and thin combined lights have stretched vertically. The interior design of the cabin was no different from the interior of the Nissan Sunny. There were two categories of cars - Royal and Deluxe. 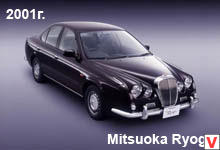 The only difference was that the Royal class cars had a bit more advanced equipment. A five-speed manual or four-speed automatic transmission with electronic control was installed as a transmission. There were also front-wheel drive and all-wheel drive modifications. With the advent of the QG18DE engine of 1769 cm³, the updated Mitsuoka Ryoga appeared.

The new engine was equipped with an electronic system of direct ignition and flaps, swirlers. The power of such a power unit was 116 liters. c. at 5600 rpm. In September 2004, Mitsuoka Motor launched a limited batch of 20 Ryoga cars for sale. These cars were the last of those produced under this brand. 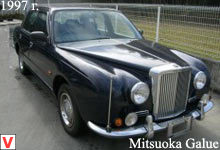 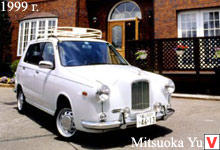 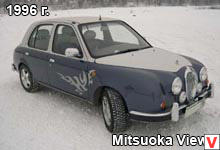