The first generation of a pickup Mitsubishi L200 debuted back in 1978. In 1979, the car received the title of "Best Pickup of the Year" in the United States. Mitsubishi L200 is truly versatile.

In its arsenal, a decent level of comfort, good permeability, carrying capacity and at the same time, manly appearance. Since its debut, the model has experienced several generations. So, in 1996, the next generation L200 appeared. The car was produced in three versions: with a usual double cabin and a full-size cargo platform (Single Cab), with a cabin where there are two rows of seats, four seats, but only two doors (Club Cab) and a version with a double four-door cabin (Double Cab). Each version could have both rear and four-wheel drive. The Mitsubishi L200 car is initially utilitarian, as evidenced by its belonging to the class of pickups (from the English pick up - lift, carry). 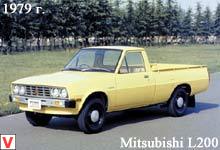 At first glance, the L200 can be unmistakably determined: its element is off-road. Impressive (235 mm) ground clearance, huge wheels and long-stroke suspension are characteristic features of an all-terrain vehicle. The interior is rather trivial, the color range is made up of strict gray tones. The front panel is simple and straightforward.

The traditional set of instrument cluster: speedometer, tachometer and fuel gauge and coolant temperature indicators. In the GLS version, an additional instrument cluster is installed on the dashboard in the middle - with an inclinometer, an external temperature indicator and a voltmeter. Moderately comfortable driver's seat is equipped with two adjustments, four-spoke steering wheel is adjustable in height. The second row offers spartan conditions: low ceiling, little legroom. The floor of the passenger compartment is raised half a meter above the ground, so a footrest is provided for comfortable penetration into the car, but only as an option. 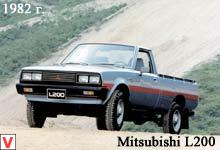 Cars with atmospheric diesel and petrol power units were not supplied to Russia, as were rear-wheel drive modifications and pickups with automatic transmissions. The L200 pickups officially delivered to Russia were equipped with only one engine - a turbodiesel with a displacement of 2477 cm³ and a power of 100 hp. (4000 rpm), and the torque reaches 240 Nm (2000 rpm). This engine was paired with a 5-speed manual transmission.

But the main advantage of a pickup is still versatility. The car can not only transport people, but also take on board up to a ton of cargo. In the cargo compartment, the side boards are rigid, the rear side leans to a horizontal position, which allows longer items to be transported. In Double Cab, the width of the compartment is 1470 mm, however, the arches of the rear wheels jut out, 1500 mm in length. With the same width, the length of the compartment at the Club Cab is 1830 mm, and at the Single Cab - 2245 mm. The new generation of Mitsubishi L200 pickup was introduced in 2000. 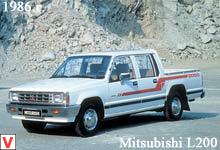 The cab of the pickup was still offered in three versions: a short double, an extended King Cab or a double 5-seater Double Cab. In addition to the basic rear-wheel drive (RWD) version, the L200 was released with the all-wheel drive part-time Easy Select 4WD transmission and the forced locking of the rear axle differential. When driving in the rear-wheel drive mode in order to save fuel, reduce noise and reduce transmission wear using a special vacuum system, the mechanical connection of the semi-axes with the front differential is automatically broken. Thanks to the all-wheel drive system Easy-Select 4WD, the L200 is moving confidently everywhere.

Front "bridge" can be connected in motion at speeds up to 100 km / h. Self-locking rear differential further increases throughput and stability on slippery roads. The design of the L200 combines practicality, thoroughness and style. The car received a solid plastic roof on a cargo platform, tinted windows, a spoiler with a brake light, arches for securing the trunk. The range of engines consists of a 2.5 liter turbo diesel with an intercooler (100 hp) or a 2.4 liter petrol (132 hp). The basic equipment GL includes anti-corrosion treatment of the bottom and hidden body cavities, power accessories, heated seats, power steering, enhanced front crankcase protection, engine compartment and transfer case, two batteries and an electronic immobilizer, audio preparation and rear fog lamp. Since the 2004 model year on the L200 in the performance of the GLS, there was a forced locking of the rear differential and ABS with EBD, which improved throughput and active safety. The basic version of the GL has become more accessible, with the interim equipment GL +, which has become a compromise in terms of equipment and price.

The front double wishbone torsion bar always ensures maximum tire contact with the road and minimizes camber changes, which results in excellent vehicle stability and a smooth, comfortable ride. Reliable rear dependent spring suspension with a rigid beam allows the L200 to carry in the back of loads weighing up to 1 ton. In December 2005, as part of the Bologna auto show, Mitsubishi introduced a new generation of L200, sales of which began in 2006. The pickup, which is always popular with motorists in the Old and New Worlds, received an original body design, made in the style of the Pajero Evo 2 + 2 concept car and the Pajero Evolution race car.

Pickup buyers will be able to choose between three types of bodywork: regular, as well as with a larger and twin cab. It can be noted that in the double cabin version, the size of the passenger compartment reaches 215.3 centimeters in length. In addition, the novelty is equipped with a unique system of permanent all-wheel drive, as well as a system of exchange rate stability, unique to cars of this class. This generation L200 has the dynamics of passenger cars thanks to the suspension, borrowed from the Pajero Evolution and a 2.5-liter 160-horsepower (136-horsepower in the base version) turbo diesel engine that meets Euro 4 standards. 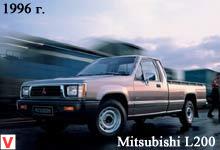 Mitsubishi engineers paid special attention to the strengthening of the suspension and reliability issues. The maximum torque of this engine reaches 314 Nm. It works in pair with either a five-speed manual gearbox or a four-speed “automatic”. 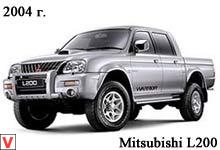