The Infiniti G35 model debuted in 2002 is the equivalent of the Japanese Nissan Skyline. The car was created according to the classic canons: the engine in front, the driving wheels - rear. Produced with sedan and coupe-type bodies. Infiniti G35 is a dynamic proportions, expressive combination of surfaces, concise and original design details. The exterior of the car gives it a sporty character: a long hood, arched roof, high and short line of the trunk. It is noteworthy that the two-door version below and shorter than the sedan. The expressive and unique silhouette of the Infiniti G35 will perfectly highlight your individuality in the modern city.

First of all, the car impresses with its non-triviality, bright charisma and a whole range of non-standard solutions. The doors open very wide, almost 90 degrees. The decoration of a spacious and comfortable cabin uses only solid, expensive and high-quality materials. The driver's seat is quite comfortable in form differs in quite a sufficient number of adjustments with large ranges, but the steering column can only change the tilt, but with it the entire instrument panel rises and falls. The car is considered a five-seater, but in the back of the couch will be more comfortable for two passengers. 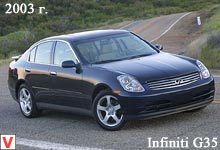 For them, the sofa will turn into two magnificent chairs with separate adjustment of the backrest (manually). The volume of the luggage compartment is 475 liters, it is not possible to increase it, since it is impossible to fold the rear seat backrests. The trunk is securely protected from unwanted penetration. The fact is that the key cannot be opened - there are no larvae, and the button in the cabin has its own additional lock, which is activated by pressing the key in the glove compartment. The Infiniti G35 coupe is a 4-seater with a stiffer suspension and sharp steering. The cabin equipment is sporty and of a higher class than the sedan.

The differences between the sedan and coupe Infiniti G35 continues in the range of powertrains. The G35 Sedan is equipped with a 6-cylinder 3.5 liter 263 hp engine. The G35 Coupe is a 6-cylinder 3.5 liter engine producing 283 hp. Both engines can be aggregated either with a manual gearbox or a hydromechanical “automatic”. Everything is good in controllability: sport-sensitive steering sensitivity, which, in addition, is distinguished by good accuracy and informational content; high stability of high-speed traffic, despite the defects of asphalt; timely, effective and unobtrusive operation of the electronic stabilization system, which, if desired, can be turned off.

The wheels placed on practically the corners of the body (on all four disc brakes) contribute to the comfortable movement and stability. This design allowed the Japanese to free up space under the short hood of the car, where a rather big V6 could easily fit. The creators have designed a very complex independent suspension in front and behind, providing the car with confidence in high-speed cornering. The suspension, although stiff, is very energy-intensive and generally corresponds to Russian roads.

The all-wheel drive system on this car distributes the load on the wheels using an electromagnetic clutch. The load distribution is controlled by a computer and can vary from a full load on the front axle to a ratio of 50:50. In this AWD system there is a special option “Snow-Mode”, which forcibly preserves the distribution of the load in the proportion of 50:50 for better car behavior on slippery surfaces. The model of 2004 was completely identical to the model of 2003, but in 2005 the company carried out a thorough modernization, aimed mainly at the interior of the G35. Exterior got a new hood, updated grille, bumper, headlights and wheels.

A completely revised dashboard appeared in the cabin, and the aluminum console panel was shifted slightly lower than in the previous version. It has updated audio control buttons, a redesigned ashtray, and an alarm button, which has now become a rectangular shape. It is located near the new automatic transmission lever. The pedals are also made of aluminum with round rubber inserts. On request, they can be replaced with fully rubber pedals. Under the hood is a more powerful engine. 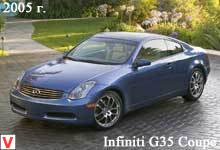 The new G35 is equipped with a 3.5-liter V6 engine with power increased from 260 hp. up to 277 hp This impressive powertrain allows you to accelerate the car from zero to 100 km / h in just 6.1 seconds. The torque has also been increased and is now 366 Nm. The standard package includes a 5-speed box, which can work as a mechanic and as an automatic. Infiniti G35 - rear wheel drive car. However, the modification of the G35x will be equipped with all-wheel drive transmission with an upgraded suspension. The car is distinguished by a bright design, comfortable interior, high reliability, polished performance, excellent acceleration dynamics and a decent combination of smoothness and handling.

In January, at the Detroit auto show, the Infiniti brand unveiled the fully updated 2007 G35 sedan. The car is positioned as the flagship of the brand and is aimed at competing with the BMW fifth series. Version G35 coupe was presented only in a conceptual version.