The famous Infiniti Q45 appeared on the market in 1989. Now she is the flagship of the model number of the company. Cars of the first years were equipped with a 4.5-liter engine producing 278 hp. In 1993, the Infiniti Q45 was subjected to easy modernization. In 1997, the world saw the second generation Q45. Cars equipped with a V-shaped 8-cylinder engine with a displacement of 4.1 liters.

In 2000, the third generation Infiniti Q45 was shown in New York. On sale it appeared in the spring of 2001. Compared with its predecessor, the car received a longer wheelbase and slightly changed the appearance.

Wheelbase 2870 mm. The sedan has a classic layout with rear-wheel drive and a 4.5-liter longitudinal V8 with a capacity of 340 hp. This engine accelerates the car to a hundred in 6 seconds. Box "automatic" five-speed with "manual" mode. Active air suspension has two modes - normal and sporty.

Lights are huge. Under the smooth fairing placed on 9 lamps. Larger ones are high beams and dimensions. Dipped xenon - in each headlight seven lamps. Dipped beam can be adjusted in height from the driver’s seat (four positions), and the luminous flux is shaped so that it eliminates the need for fog. The company claims that the Infiniti Q45 headlights are the most powerful in the world. The salon is very spacious.

The interior design harmoniously combines the Italian leather trim and numerous wood inserts. The steering wheel is adjustable for the length of the column and the angle of inclination electrically. The large speedometer in the center of the dashboard is digitized in kilometers and miles, on the right is the tachometer, on the left is the engine temperature and fuel level indicator in the tank. To the right is the control unit for the climate control system and the 300-watt Bose stereo with nine speakers, a subwoofer and a CD changer.

Management of some functions is duplicated on the steering wheel. Information on the operation of the systems is displayed on a large color monitor in the center of the front panel. Noble design element - oval chrome clock in the center, above the radio. Executive class car emphasized the performance of the rear of the cabin - a special concern for the passenger. Large armrest with cup holders, climate control and audio system, handrails on the backside of the front seats, autonomous lights, mechanical perforated curtains on the doors and electric curtains on the rear window. Legroom is enough with the front seats fully shifted back.

Infiniti Q45 has a fairly impressive luggage compartment. Access to it is only from pressing a button on the driver’s door or from a key fob. The standard kit includes rearview cameras and one of the best navigation systems in the automotive market. For the 2005 model year, the Infiniti branch prepared a modernization of the flagship Q45 sedan (in Japan, the Nissan Cima / President). The car received a slightly modified design of the front part with a new grille, separate fog lights, a new hood and front bumper. In addition, the body has become more durable in torsion and bending, improved insulation of the cabin and reduced vibration load. 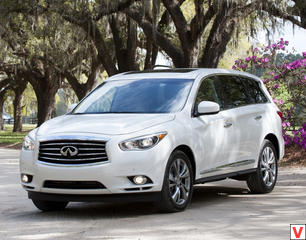