The mid-size premium crossover Infiniti EX35 was first introduced as a concept in the spring of 2007 at the New York Auto Show, and in August of the same year, its production model was shown at the Pebble Beach Concours d'Elegance in California. In the US, the crossover went on sale at the end of 2007, and on the European market EX35 is expected in the second half of 2008. The Infiniti EX35 is built on the FR-L platform, on which the G, M models are produced, as well as the larger Infiniti FX crossover. Model 4630/1800/1570 dimensions (1590 – with railings) mm with base 2800 mm. Curb weight 1702/1776 kg, depending on the type of drive. Load capacity about 400 kg.

The exterior of the car is made in the style of other models of the corporation Nissan. In the design of the EX35, many innovations have been applied: for example, the body is painted with a special Scratch Shield coating, which is capable of “tightening up” small scratches on the body for three years after the production of the car. The Welcome Lightning system uniformly illuminates the car and the space around it when approaching and away from the car. In the interior used modern materials, leather and rosewood. 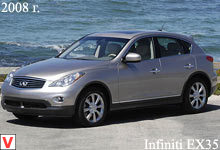 The list of installed equipment is very wide: electronic seat adjustments, navigator, cruise control, Intelligent Key with a push button ignition, Push Button Ignition, Bose Premium Audio sound system with 11 speakers, including two subwoofers, a six-CD changer and the option iPod connectivity, alarm system with immobilizer, built-in hanger for front seats, and much more. The backs of the second row seats are automatically folded by pressing a button. Trunk volume 476 liters. The crossover is equipped with the Around View Monitor circular surveillance system, which includes four video cameras built into the front and rear bumpers (the total viewing angle is 360 degrees).

Such a system allows the driver to get rid of "blind" zones and provides good visibility, and also helps with parking. For the head lighting meets the special adaptive system Bi-Xenon Adaptive Front lighting System (AFS). In addition, the Infiniti EX35 received adaptive steering, automatically changing its sensitivity depending on the speed. The EX35 is equipped with a longitudinally located 3.5-liter VQ35 V6 petrol engine with distributed injection, a double overhead camshaft and 24 valves per 297 hp cylinder. (at 6800 rpm) and a maximum torque of 343 Nm (at 4800 rpm). Dynamic characteristics are not inferior to the "older" model Infiniti FX35. 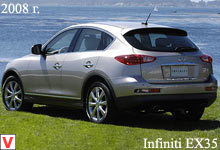 The consumption of the AI-95 in the urban cycle is 13.8 (14.7) liters per 100 km, and in the country cycle it is 9.8 (10.2) liters (the result for the all-wheel drive version is shown in parentheses). The motor is paired with an electronically controlled five-speed automatic transmission with manual shift. The EX35 is equipped with a plug-in four-wheel drive with a proprietary electronic power control and torque distribution system ATTESA E-TS (when the rear wheels slip, a part of the torque is transmitted to the front axle using a friction clutch) and only to the rear wheels. The ground clearance is 145 mm for the rear-wheel drive version and 165 mm for the all-wheel drive.

In addition to this, the traction control system TCS is installed, as well as the newest electronic system Lane Departure Prevention (LDP), which warns the driver about crossing the road markings and, if necessary, using the VDC stability system, braking one of the wheels, thereby maintaining the vehicle’s position within its lane. The American Institute for Insurance and Road Safety (IIHS), after conducting a series of crash tests, awarded the Infiniti EX35 top marks for all types of collisions - frontal, side and rear. In addition, the car was awarded the Top Safety Pick, thanks to the excellent work stability of the system.