Hyundai i10 is a class A front-wheel drive five-door hatchback. It replaced the Hyundai Atos model. The premiere took place in India in the autumn of 2007. Production of the model is organized in the same factory Hyundai Motor India. The i10 is the smallest car in the Hyundai lineup. The length is 3565 mm, width - 1595 mm, that is the size of a Kia Picanto, with which, by the way, the i10 has one platform.

Weight - 860 kg. Smooth shapes i10 successfully combined with a spectacular grille and large headlights, which gives the car an original appearance. The cabin can comfortably accommodate 5 adults; for the comfort of passengers, all seats are equipped with armrests. In the interior, no frills, but beige plastic and black inserts look harmonious and create a sense of forethought. The control of a few devices is concentrated on the top panel: there is a radio tape recorder, a button for activating the emergency gang, and below are simple control wheels for blowing. Adjusting the side mirrors is manual, but there are windows and tilt adjustment of the steering column, which allows the driver to achieve an optimal body position while driving. In front of the driver is a modest dashboard with a large white speedometer in black edging.

Large wheelbase (2380 mm) provides additional stability of the car and spaciousness of the cabin. In the trunk, the volume of 225 liters easily fit everything you need. Hyundai i10 is equipped with a 1.1-liter iRDE gasoline engine, which demonstrates good dynamics in combination with economical fuel consumption (5 liters per 100 kilometers with a combined cycle).

The engine develops power 66.7 hp at 5500 rpm and maximum torque of 10.1 kg / m at 2800 rpm. The maximum speed of 152 km. This power unit is familiar to the owners of Kia Picanto, except that it was slightly modified, reducing consumption and improving environmental friendliness. CO2 emissions are now only 119 grams per kilometer. The gearbox is offered to customers in two versions: a 5-speed manual console type or a 4-speed “automatic”. Short-shift lever is located so that between the driver and the front passenger remained free space. Separate words deserve the means of security that for a car of this size is very important. 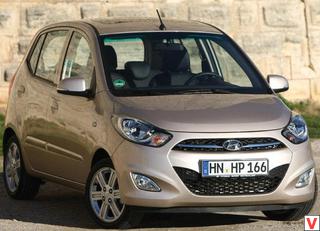 In i10, designers paid a lot of attention to both active and passive safety features of the driver and passengers. Already in the basic package includes two front airbags, belts with pretensioners, ABS, and the locks of all doors are equipped with a device for their automatic opening in a collision. Tubeless tires are also supplied as standard. Hyundai i10 has a two-year warranty and is available in four trim levels - D – Lite, Era, Magna and Auto. Stylish appearance, excellent driving performance, safety and efficiency of the Hyundai i10 allow it to be a worthy competitor in its class. The new version of the Hyundai i10 was presented in the fall of 2010 at the Paris auto show.

They did not drastically change the model in Hyundai - both external and internal innovations are minimal. Its dimensions were: length - 3.565 m, width - 1.595 m and height - 1.54 m. The base is 2.28 m. The hatchback update was reflected in a larger form of the front of the car. Oblique headlights with decorative stripes slyly curved inside their block. Wide trapezoidal air intake, which is only a small jumper separated from the grille. 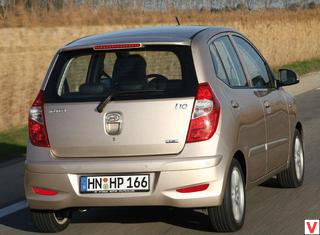 And the already irrelevant round fog was replaced by more fashionable shapes of these lamps - triangular, in sharply outlined nests. The feed is also slightly transformed - due to a different bumper and a modified design of the rear lights. And the shape of the mirrors has changed - in the latest fashion with more efficient aerodynamics. At the same time, the mirror cases themselves acquired another fashionable chip - the turn signal repeaters built into them. Changes in the interior are also small. All the details and architectural forms of the cabin have not changed and remained restrained, functional and completely ergonomic.

The dashboard design was changed, the blue light replaced the green one, the quality of the seat upholstery improved. The luggage compartment hatchback small about 195 liters. The car is equipped with two petrol and one diesel engines. The three-cylinder one-liter gasoline engine (69 hp) replaced the engine with a volume of 1.1 liters. 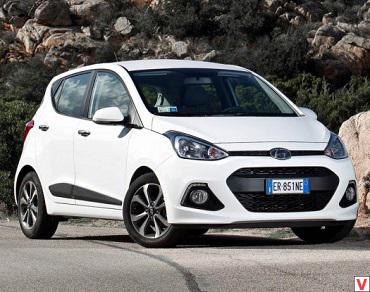 (67 hp). In the 2011 model, the Hyundai i10 Dlue with a volume of one liter has an intelligent start-stop function. This model in the entire history of production Hyundai has become the most economical and environmentally friendly car. The unit accelerates the car to "hundreds" in 14.8 s with a maximum speed of 150 km / h, spending only 4.2 l / 100 km. Emissions from Dlue Drive technology were ninety-nine grams of CO2 per kilometer. 78 hp gasoline engine was replaced by an engine capacity of 1.25 liters. in 85 hp The dynamics of this motor is slightly better: 100 km / h in 12.2 s with a “maximum speed” of 169 km / h, but the flow rate is higher (4.6 l / 100 km).

With an automatic transmission, acceleration to 100 km / h takes 13.8 s, and fuel consumption is up to 5.5 l / 100 km. The 1.1-liter diesel remained with its 75 horsepower unchanged. All engines in terms of exhaust levels are given in the Euro-5 standard. KP - equipped with a five-step mechanics, and a four-stage machine. Disc brakes available on both axles. The rear suspension is independent torsion bar, the front is independent MacPherson. For Europe, the Hyundai i10 comes in a complete set: Classic, Active and Style. The basic version of the Classic is equipped with air conditioning, power steering, ABC, elektrosteklopodemnikami, two airbags. In the version of Active added 14 inch alloy wheels, height adjustment driver's seat and installation of electric mirrors.

In the Style variations, a leather steering wheel and a panoramic sunroof are added. At the 2013 Frankfurt Motor Show, the second-generation premiere of the Hyundai i10 hatchback took place. The car has undergone major updates. He received a completely redesigned exterior and interior. In addition, he added a little in size - its length is 3 645 mm (+80), width - 1 660 (+65), and the height was reduced from 1 550 to 1 500 millimeters. The wheelbase also grew by 5 mm to 2385 mm.

The volume of the trunk pyatidverki grew to 252 liters, which is 27 liters more than its predecessor. If you fold the rear row of seats, the volume of useful space will increase to 1046 liters. The car is developed in the European division of the manufacturer located in Germany. Production for Europe was established in the city of Izmir (Turkey), while in the Indian market the model will be sold under the name Grand i10, but this version is somewhat simpler and cheaper than a car for the Old World. The updated model received a corporate design Fluidic Sculpture (in translation - a flowing sculpture) with a stylish front part, which includes swept headlights and a massive air intake.

Wheels depend on the configuration level and engine. They can be 14-inch, and both light-alloy, and steel, and 15-inch from a light alloy. The Hyundai i10 2014 has a completely new front and rear lighting, the bumper has changed, LED running lights have appeared, and the sidewalls have got a wide curved molding. The shape of the body has noticeably changed for the better, it has found relief sidewalls, a hood and a rear door with a roof spoiler. The interior began to look more solid, thanks to the redesigned front panel and center console, as well as the new steering wheel and a different visor of the instrument panel, which lost an additional bend. Salon offers more storage space inside.

The basic equipment of the Hyundai i10 II generation includes two airbags and a stabilization system. The options include technologies unprecedented in the segment, such as cruise control with speed limiting function, climate control with automatic maintenance of the set temperature, heated steering wheel with leather, tire pressure monitoring, and keyless entry system. Noise isolation has been improved and now the sound of the engine and background noise will annoy the driver and passengers much less. Motors that are equipped with the second generation Hyundai i10, installed on older versions, but were redesigned to improve performance and efficiency. Offers a choice of two motors.

Liter three-cylinder capacity of 65 hp with a torque of 95 Nm and a 1.2 liter four-cylinder capacity of 86 hp An alternative to the 5-speed manual transmission is a 4-speed automatic. With a manual transmission and a 1.0-liter engine, the car accelerates from zero to 100 km / h in 14.9 seconds, and with a 1.2-liter engine, to accelerate from 0-100 km / h, 12.3 seconds is enough. With the choice of an automatic box, the acceleration time increases to 16.8 and 13.8 seconds, respectively. Average fuel consumption ranges from 4.6 to 6.2 liters, depending on the engine and gearbox selected.