The debut of the first generation Opel Omega (under the symbol A) was in 1986. The model has replaced the Opel Record and Opel Commodore. The car was produced with sedan and wagon bodies, the latter received the prefix Caravan to the name. Opel Omega had a wide choice of standard equipment and belonged to business class cars. The interior is concise and strict.

Sufficiently spacious cabin complemented by a large trunk. Excellent smoothness and handling are the main components of Omega. Gamma of power units was represented by the following engines: gasoline carburetor volume of 1.8 liters; injection volume 1,8i l; 2.0i l; 2.4i; 2.6i; 3.0i, as well as diesel atmospheric engines of 2.3YD and the same turbocharged (2.3YDT and 2.3DTR). The engines were aggregated with a five-speed manual gearbox or a four-speed automatic having winter and sport modes.

All brakes - disc, with a vacuum booster. Drive to the rear wheels. The first-generation Omega even won the honorary title Car of the Year in 1987. In 1990, Omega was waiting for modernization. Changes in the exterior were minimal. In 1993, it was decided to discontinue Omega A. A year later, Opel introduced the second generation of Omega, this time with an index B.

The novelty resembled its predecessor. As previously proposed: two body types (sedan and station wagon) and rear-wheel drive. But the list of additional equipment has increased significantly: there were airbags for the driver and front passenger, and air conditioning systems began to be installed in complete sets with powerful engines. At the same time, the shortcomings inherent in the predecessor were corrected. So, for example, the durability of the body has noticeably increased, it has become less susceptible to corrosion. Omega second generation, becoming longer by 113 mm, began to look more elegant.

The new design features smooth and sleek lines, a new grille design and more sophisticated front optics with xenon headlights. Other steel and taillights - not to mention the redesigned body panels. The cabin has remained the same spacious, so three passengers can comfortably sit in the backseat.

The instrument panel has become similar to its "brother" in the Vectra model of the "B" series, namely: a wide electronic speedometer, an incomplete circle outlines a tachometer. Here - light indicators, and on the sides - fuel and temperature indicators and a wide multifunctional display with readings of the onboard computer. In addition to the unpretentious fabric upholstery used in the basic versions of Omega, there may be a leather variation, and in the Sport package, aluminum is used instead of wooden inserts. The location of control devices is very convenient.

Seats with rigid lateral support have increased comfort due to the double structure and numerous servo drives, which can be controlled by pressing a button. An adjustable steering column also helps you get behind the wheel. Visibility and noise insulation are significantly improved. The air conditioning system with integrated dust filters maintains an optimum temperature and cabin air quality regardless of the season and air emissions of various emissions. And what is especially important is the changed line of engines.

Of the old units was left only two-liter single-shaft (OHC) 20SE with a modernized injection system. New twin-shaft (DOHC) engines with a volume of 2.0i 16V were added to it; 2.5i V6; 3.0 MV6 liters and a new 2.5 TD turbo diesel engine from BMW. Engines are still aggregated with a five-speed manual gearbox or a four-speed automatic. All wheel suspension - independent; front - like McPherson, back - on oblique levers. Brakes: disc, ventilated for all wheels. Tire size: 195/65 НR15. 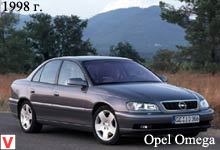 Steering - with power. Opel, equipped with ABS and PBS, confidently and without skidding brakes and accelerates on any surface. In the fall of 1997, the 100-hp 2.0-liter direct-injection turbo diesel engine was added to the line of power units (fuel consumption in the city is not more than 9.4 l / 100 km). Safety is provided by a self-stabilizing undercarriage DSA with a multi-link rear suspension, additional wheel retaining elements, reinforced anti-roll bars and hydraulic bearings. And besides, the new Opel has an improved Electronic Traction Control anti-skid control, an engine control system and anti-lock control with a low brake pedal force and high sensitivity.

The Opel Omega B passive safety system includes body crush zones; increased front suspension arms, which take on part of the load; reinforced thresholds; roof and pillars; steel beams in the door; reinforced seat frames and their backs, as well as the steering column that collapses in a collision. The seats are equipped with a safe head restraint system AHR (Active Head Restraints). All components of the passive safety system in the event of a collision act in concert - this is called the Syncro synchronization protection system. That's just the fuel tank is not installed in the best, in terms of safety, place, namely: in the deformation zone of the trunk.

In 1999, six years after the start of production of the second generation, Opel upgraded the model. Changed the design of the front and rear parts of the body, which have become more angular. The interior has changed, and first of all because of the panel, again, an angular form. New steering wheel with four spokes and door panels are designed in the same style. Control buttons for electric windows and buttons for electric adjustment of exterior mirrors are moved for convenience on the armrest of the door. 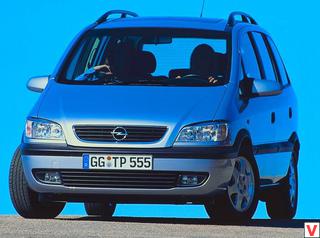 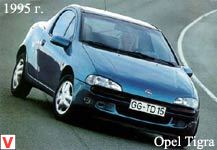 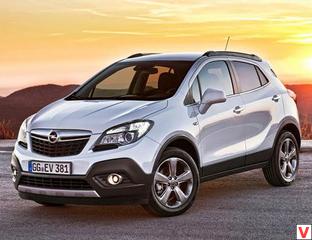