The prototype of the Acura MDX SUV called the MD-X was first demonstrated at the Detroit Auto Show and aroused great interest. Production of the model for the American market began in the fall of 2000 at the Canadian plant of Honda. Under normal conditions, the MD-X is a front wheel drive car, four-wheel drive is only connected when the front wheels slip.

Instead of the usual viskomufty used for this plate clutch, which are controlled by an electromagnet. Acura MD-X is built on the Odyssey mini-van platform and is intended primarily for city trips with a high level of comfort, although, thanks to the VTM-4 all-wheel drive system, the car will feel normal on easy off-road too. The new Acura MDX is more likely to be a cross between an SUV and a minivan, than a full-fledged "jeep". But on the other hand, it makes a great contribution to the comfort of movement of this luxury car on roads both for general use and off-road. If possible, the transformations of the cabin MDX also resembles a minivan, and the dashboard resembles an Acura RL.

This all-wheel drive car with a transverse power unit, 5-speed automatic transmission and a monocoque body. The gasoline engine (240 hp, 3.5-liter, 6-cylinder) with an aluminum block is equipped with a camshaft control and valve lift control system (VTEC), which allows you to expand the range of 95 percent maximum torque of 332 Nm from 2000 to 5000 rpm crankshaft. To disperse up to a hundred, a car takes only 8.5 seconds - a great indicator for an SUV! But something else is surprising: with this temperament, the MDX has a very moderate appetite.

The average fuel consumption is just over 10 l / 100 km (usually the 3.5-liter jeeps absorb about 15 l / 100 km). The new all-wheel drive system VTM-4 automatically redistributes torque between axles, depending on the grip on the road. Unique tires with a universal tread pattern with a size of 235/65 R17 provide an excellent balance between maneuverability and handling. Laconic elegant lines of the body give the car a sporty look. In the interior are used genuine leather, aluminum panels and upholstery. 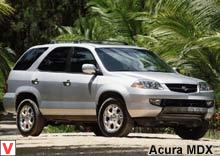 The center console has a large size, the seats of the second and third rows are folded, forming a flat cargo area. The air conditioning is controlled independently from both the front and rear seats. The list of standard cabin equipment includes: immobilizer, cruise control, sunroof, on-board computer, seven-speaker audio system and CD changer. It is planned to produce, in addition to the base version, the Touring version with front seats equipped with eight-adjustment electric drives, a more powerful audio system (200 W), etc.

The model is advertised as a very economical and minimally polluting environment, since it has already received a certificate of compliance with the Californian standard for emission toxicity and is the first SUV to have a gasoline vapor recovery system during refueling. SUV, well equipped in terms of passive safety. Inflatable cushions of the new generation, including the side, body with energy-absorbing zones, protective bars at the door - all this meets the highest requirements, suggesting that the NHTSA Acura 4x4 crash test can get a high five-star rating.

It is curious that the machine on request can be equipped with a special “winter” package, including special tires, heated seats, more powerful glass-cleaning nozzles with antifreeze, a solid tank for it, and reinforced door seals. In September 2013, the Acura brand in Moscow announced the official entry into the Russian market. Now the company intends to establish itself as a serious player in the luxury market, capable of competing with well-known European (and not only) brands. Such a mission is largely entrusted to the MDX 2014 model - a seven-seater crossover of the 3rd generation.

This car is thought up, thought over, born and grown up in the USA. By the way, the MDX accounts for 1/3 of all Acura sales in North America. According to experts from Acura, MDX is a good compromise between practicality, drive and prestige. This model is aimed at rich buyers. The manufacturer positions the Acura MDX as a competitor to the advanced offers on the premium SUV market: Porsche Cayenne, Audi Q7, Infiniti FX, Volvo XC90. Despite the 7-seat layout, the SUV does not look obese and has an energetic profile. Exterior MDX 2014 received a new style, which Acura called Executive Aero Sculpture, noting that it was he who improved the aerodynamic characteristics of the crossover by 17%.

The front part is a single composition of the grille and elongated multi-section LED headlamps and Jewel Eye ™ daytime running lights. There are more metal parts. The curves of the relief lines on the hood are combined with folds on the sidewalls, and the metal edging of the glazing of the profile is in harmony with the chrome roof rails. Horizontal taillights, like headlights, are united by a chrome strip, and a high diffuser shelters a pair of diamond-shaped reflectors, also accented by the sheen of the metal. Depending on the configuration, the car may be shod in 18- or 19-inch rims.

The car body is 50 percent lightweight. This includes high-strength steels, aluminum and magnesium. In this regard, the car became lighter and tougher. The overall length of the MDX 2014 is 4934 mm, the width is 1962 mm and the height of the vehicle is 1716 mm. The size of the wheelbase increased in comparison with the predecessor reached 2820 millimeters. Inside the car, much attention is paid to the functionality and comfort of passengers.

Soft, slightly rough-looking and pleasant to the touch plastic, delicate skin with profiled patterns and inserts from wood veneer. By the way, there are three variants of the interior, but in all the wooden inserts are the same - designers are especially proud of this element of the decor, made by hand from olive ash. They also worked on the controls - the buttons are very well located on the center of the console. Part of the buttons transferred to the driver's door. As a result, none of the elements of the dashboard is not overloaded, and you can find the desired function at the level of intuition.

Driver's seat has the ability to electric adjustment in ten directions. All the settings of the driver's seat are remembered and loaded depending on which of the two keys the car is open. It became much easier to get to the third row of seats, due to the fact that the cabin height increased by 5 cm, and the width - by 7.5 cm. There is a One-Touch Walk-In function, with which the middle row chair is moved forward by one push of a button . The third row of seats offers from 71 cm to 80 cm of legroom.

The richest equipment of the car completes the picture: a multimedia system with a separate DVD and CD player, a huge screen and individual audio and video input for the rear passengers, a 529-watt audio system with 12 speakers, heated steering wheel with all-electric adjustments, panoramic cameras of the parking system, HDMI- entrance, etc., not to mention the individual climate for each passenger and heated rear sofa. The luggage compartment is 447 liters. It can be expanded to 2 548.5 liters, if you add up the second and third row of seats. The previous 3.7-liter V6 engine with direct injection was replaced by a representative of the new Honda engine range - Earth Dreams.

It is equipped with an intelligent variable cylinder management system (Variable Cylinder Management). Thus, under the hood of the MDX is a 3.5-liter V6 engine that produces 290 hp. and 362 Nm of maximum torque, which is 10 hp less compared to last year. The engine is connected to a six-speed automatic transmission, which remains the only option for this model. But, due to the reduced weight of the car and engine size, fuel consumption decreased slightly.

She was the answer to the demands of buyers, because not all of them need a car with all-wheel drive. There are enough car owners who prefer a model with reduced weight and front-wheel drive. Engineers from Acura paid special attention to refining the proprietary system of intelligent all-wheel drive Super Handling. The system itself brakes the slip wheels with dynamic acceleration, and also redistributes the torque depending on the dynamic load on the axles. In various situations, the redistribution varies in the ratio from 90/10 to 30/70 to the front / rear axle, and can also completely move along the sides of the longitudinal axis.

The aggressiveness of the SH-AWD system as well as the steering effort can be corrected by the integrated integrated dynamics control system (IDS), which provides damping. 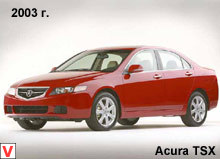 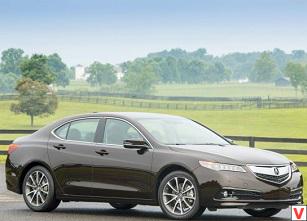 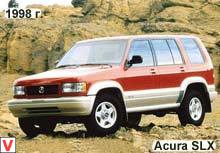