It all started with the fact that in 1972, executive director Ernst Furmann (Ernst Fuhrmann) decided to move away from the classic “Porshevsky” rear-engine style and make a model range with a “normal” engine layout and with “normal” cooling, i.e. water. The results of his efforts can often be seen on European highways - these are the 924, 944 models and, of course, the mighty 928, which almost became the flagship of Porsche instead of the 911 model. Although Furmann was pulling the company in the most crisis times, as soon as they passed, his dictates Ferry Porsche provoked a stormy protest, after which Furmann quickly gave way to a new “chief executive”.

This time the hot post was occupied by Peter Schulz, an American of German descent, who was expected to take decisive action. And Schultz was not long in coming. First of all, he invested heavily in the development of the 911, which had already begun to be forgotten. A 911 cabriolet appeared, "with a bang" adopted in Frankfurt in 1982. But a year later, in 1983, the Porsche 959 first appeared in the eyes of an astounded audience.

Collecting everything possible and impossible, he personified the most modern sports car from Porsche. It was one of the most expensive and fastest cars in the history of the world famous brand. The project, surprisingly, was tenacious. At first, only 20 “combat” machines were manufactured, which started their triumphant march around the world championships. It was a Super car that dominated the 1984-1986 Paris-Dakar race. Only three and a half years later, the first “civilian” clients received the promised “exclusive”, having shown phenomenal patience.

The cost of DM 420.000, which was enormous even by today's standards (for the 80s, the sum was absolutely fantastic) made the car available only to very rich people. Naprmer, 959-m immediately got millionaire Boris Becker. In 1987, the company announced the production of two hundred such cars. The main technical base was borrowed from the sport-racing model 956: I received from her spring-spring suspension of the rear wheels and most of the engine parts, horizontal six-cylinder, with a working volume of 2850 cm³, with two camshafts in each head, four valves per cylinder and water cooled. Two intercooled turbochargers were serviced by a carefully implemented Bosch control system.

And as a result - 450 hp transmitted to all four wheels through a six-speed gearbox. From a spot to 100 km / h, the 959th fires in just 3.7 seconds. However, thanks to the all-wheel drive and verified chassis, the supercar is surprisingly obedient and comfortable.

The transmission also included a box and four programs for selecting gear ratios, which allowed keeping the elevation and descent angles under electronic control. An improved drive brakes supplemented electronic anti-lock braking system (ABS). Silent smooth ride, a feeling of complete security - and at the same time excellent dynamic performance. A sophisticated, electronically controlled transmission was based on the first developments of the 911 model with all-wheel drive of the 1981 model. But this time, the distribution of torque was monitored by the so-called. Porsche Electronic Clutch System (Porsche Control Clutch).

The six-speed gearbox, despite the giant torque of 530 Nm, in combination with the main pair had ultra-short gear ratios. The suspension also had its little secrets. For example, the control system of a road gleam. The upcoming harsh conditions of the African deserts forced not only to ease the body as much as possible, but at the same time, to make it a lot stronger than usual. Therefore, lightweight and durable fenders, doors, a luggage compartment lid and a hood made of materials related to the aerospace industry rather than to the automotive industry were hung on the steel frame. Design 959 is a separate branch of the evolution of the 911 model.

A more developed tail section with a “combat” rear wing that has thoroughly grown into the body; in the rear wings you can see air intakes for charge-air radiators. They are unusual - the edges of the inlets are smooth and even, as if melted, which makes them look very natural. The grilles on the front bumper "are responsible" for the air supply to the brakes and radiators, the headlights are recessed into the body, and the triangular mirrors on small legs with neat ears pressed against the front struts. The aerodynamics of the body (Cx = 0.31) largely contributed to the establishment of a record speed for those years for production cars - 317 km / h. 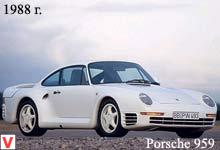 Only in the 87th year, the Ferrari F40 exceeded this figure by 6 km / h. Like other Porsche, the 959th was baptized with Le Mans. After minor changes made to participate in races of this level, this car, under the symbol 961, became the first in the GTX class and the 7th in the overall standings, which can be regarded as a success. The interior of the car did not represent anything out of the ordinary. “Porsche Owner” with experience found out with surprise in the 959th familiar touchdown on the 911 Turbo model.

Wheels for serial copies had a suitable size of 235 / 45- and 255/40-VR17 and were fixed with a central nut, as in most racing cars. Nevertheless, one of the best cars ever created by Porsche quickly became a rarity and a classic of the company. The bold project, brought to life, became the main work of Peter Schulz within the walls of Porsche AG. Some time later, he left the company. And in Zuffenhausen, they gained invaluable experience, which very soon came in handy for creating the next series of the 911 Turbo model. Porsche 959 has shown endless potential for improvement.

In the market of collectible cars, he is found now. Debuting in the mid-80s, the 959th and today remains one of the extraordinary and amazing members of the Porsche family. 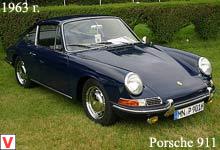