In 1996, the upgraded version of the S70 replaces the Volvo 850 sedan. This step of the company is explained by the desire to refresh the car and adequately oppose its products to such giants as BMW and Mercedes-Benz, who have updated their models. The 850th model was taken as a basis and more than 1,800 changes were made to its design, including external ones. The inherent 850 angularity disappeared. In comparison with her, the S70 began to look more rapid and dynamic. From his predecessor, he differed more streamlined body design and increased size.

Among the characteristic elements of the exterior design can be called a strongly inclined, but at the same time a rather flat glued laminated windshield, high side glazing and fog lamps built into the massive front bumper. The modified shape of the rear lights and cut-out under the number. The opening of the trunk lid has become much wider. The exterior of the S70 was designed using new Volvo design concepts. The more rounded shape of the case is perfectly combined with a completely updated interior trim, which was borrowed from the C70 coupe model. The interior of the S70 has undergone more serious changes. The new interior has created a feeling of space and increased comfort of the car.

First of all, the door panels became smoother. They appeared chrome handles locks the usual form and convenient keys control electric windows. In the front doors there are pockets, and on the driver's door housed the control buttons, unlocking the trunk lid and fuel tank. The steering wheel and front panel have changed slightly. Adjustable tilt and reach steering column has become a few centimeters longer. The dashboard is simple and functional. It is made in the classic Volvo style: lots of information and a few carefully designed instruments. All devices have a new design that provides ease of use and improves the quality of their readings.

The run counter on the S70 is liquid crystal; It is located in the center of the "arrow" speedometer. Only the speed, rotational speed of the crankshaft, the supply of fuel and the temperature level are monitored by individual instruments. The rest of the information is displayed on another oblong screen. The length of the car increased by 5 cm, and the volume of the trunk - from 445 to 470 liters. Due to which the interior has become even more spacious. The new front seats have improved height adjustment, a more efficient heating system and upholstery made of the latest materials. It is worth noting the adjustment of the seats in height with a very large range.

In the brake lights were implanted so-called LED-crystals. After pressing the brake pedal, they begin to emit light 250 times faster than conventional incandescent bulbs. In practice, it looks like this: when an emergency stop at a speed of 90 km / h, the driver of the vehicle behind it has an extra 5-6 meters of stopping distance in reserve. This is another example of the safety of Volvo’s engineers, which the company traditionally pays great attention to.

As befits a car of a famous Swedish brand, the S70 has an impressive list of safety-enhancing devices: a child seat built into the backrest armrest, automatic adjustment of the upper seat belt anchorages in the front seats and their pretensioning in all places. The steering column in the frontal impact develops; the doors will automatically unlock if the front or side airbags trigger. The body structure provides deformed zones, transverse elements (to dissipate the impact force) and power - to prevent the penetration of the wheels into the cabin space. The fuel tank is reliably protected and has safe fastening of tubes.

The security level, one of the highest in the world, has been further improved and includes the development of the SIPS system - side collision protection. The impact force is redistributed over the support elements, door pillars, roof and floor. Absolutely all cars are equipped with 5-channel ABS, which is paired with all 4 disc brakes and TRACS anti-skid system, which is connected at a speed lower than 40 km / h. Volvo has developed its own Stability and Traction Control (STC). It guarantees the transmission of torque to the drive wheels in order to maintain a stable grip. STC will help start the movement if the drive wheels are in different conditions, for example, when leaving the curb.

The system works in all speeds. At the same time, if at low speed it connects the working brake system, then at high speed it removes the engine torque. However, STC can only be used on vehicles with a gasoline engine equipped with a turbocharger. It is not available for all-wheel drive versions of the S70.

Volvo S70 has an impressive list of standard equipment: electric front and rear windows and exterior mirrors, headlamp hydrocorrector and side airbags are included in the basic equipment of all Volvo S70. As with the 850 series, the S70 was offered a custom-made folding seat for two children, mounted against the direction of movement. It, like all other seats, has 3-point seat belts and head restraints.

If necessary, the seat can be removed under the boot floor. The gamma of engines is represented by four five-cylinder in-line petrol engines and one 140-horsepower diesel engine of 2.5 liters. The maximum speed is from 195 to 245 km / h, respectively. Turbocharged equipped with 2 gasoline engines. One of them - a working volume of 2.4 liters, provides high torque over almost the entire range of engine revolutions. The other is designed to provide good acceleration at low, but has lower peak power and consumes less fuel at high revs. According to its characteristics, the turbo diesel engine has approached gasoline engines: it can accelerate a heavy car up to 100 km / h in 10.2 seconds.

The maximum speed of the diesel version is 200 km / h. The most powerful gasoline engines were equipped with “charged” cars, which have the index “R” in the title. The Volvo S70 gearbox can be either a 5-speed manual or a 4-band automatic. Both models were inherited from the same 850 series. 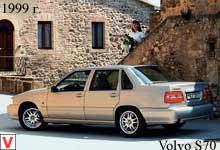 A special front suspension, incorporating the McPherson strut and lever, combined with a single ball bearing, prevents the vehicle from “diving” in the front end when braking. It increases comfort and more evenly distributes braking force. Volvo S70 has excellent anti-corrosion resistance of the body. All cars have good processing and warranty period of 10 years from rust-through. Plus, all the elements of the body are galvanized. Salon Volvo S70 trimmed in leather and wood. These noble materials coexist even on the steering wheel.

A first-class audio system with a CD changer, climate control, all kinds of electric drives - all this creates a feeling of a truly prestigious and chic business class model. A special sensor for the outdoor air temperature through the LED warns the driver about the appearance of ice. The electric drive is not only the seats, but also exterior mirrors and adjustable dipped headlights. Volvo S70 differs in high-quality finishing, excellent road performance, high level of security: there are front and side airbags, plus anti-lock brakes. 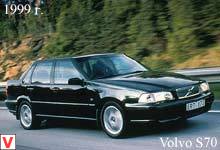