The first generation of the open version of the Volvo C70 entered the market in 1997. The appearance perfectly matches the internal content, which provides an exceptional combination of comfort, control characteristics and performance. For fine tuning of the dynamic characteristics of the C70, the advanced experience of the British company TWT in chassis technology was used.

As a result, the Volvo C70 is one step ahead of its predecessor, the 850 R. The handling is further improved, the safety is further enhanced. The Volvo tradition obliges cars to be an example of safety, and the C70 is no exception. 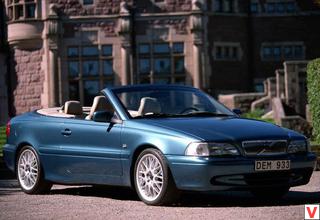 It provides excellent handling under all road conditions, primarily helping the driver avoid potentially dangerous situations. And if the accident occurred, then the best safety technology comes to the driver's assistance. The design of the Volvo C70 is based on the design of the Volvo 850, so it is equipped with the same safety related design solutions. The elegant two-door case has exceptional rigidity.

This allows the chassis to take on the response to the road and the driver's actions. In March 2005, the last cabriolet of the first series rolled off the assembly line - around 50,000 of these cars were assembled and sold worldwide. In the same year, the debut of the second generation coupe-convertible C70 with a hard folding top. The car was created on the C1 platform with the participation of the famous Italian bodywork studio Pininfarina. In this case, Volvo experts were responsible for the overall layout of the car and the design, and the body structure and three-piece folding hard-top was fully developed by Pininfarina. The maximum addition time takes 30 seconds. 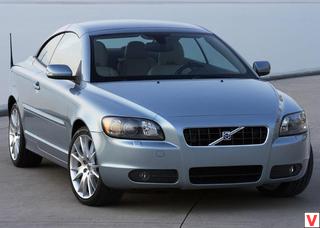 The roof of the new cabriolet is produced at a joint venture between Pininfarina and Volvo Cars - Pininfarina Sverige AB in Uddevalla, Sweden. When creating a Volvo C70 coupe-cabriolet, the Volvo Cars design team, led by Fedde Talsma, originally designed the sports coupe and only then a convertible based on it. The main difficulty was to create a car that would organically and attractively look both in the body of the "coupe" and "convertible". The updated model has become shorter and sits below its predecessor.

This combination in combination with a very short front overhang provides the car with an impressive appearance. The shoulder line of the body is extended to the rear of the car, and all four corners of the model have become more rounded. Elegant Volvo C70 has a dynamic design, spacious interior, high-quality trim, good driving performance, high level of security. The body of the Volvo C70 is made of steel. Made so as to ensure the safety of all four riders - even with the roof down. 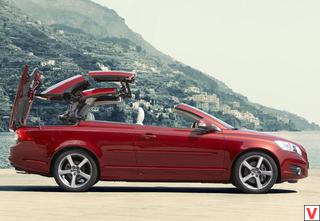 A rigid cage of the passenger compartment, a multi-stage front module with energy-absorbing zones, front and side airbags, a crash-proof steering column with a wheel “retracting” with a frontal impact - the C70 has it all. But for a convertible, we also need specific means of additional protection. First, this is a new inflatable "curtain" to protect the head during a side impact. Usually, the “curtains” are hidden in the roof, and with a side impact they “shoot” from top to bottom. But since the cabriolet does not have a “permanent” roof, in the Volvo C70 the “curtains” are built into the doors and open upwards.

After actuation, the curtains are blown away with a delay - in case of a possible overturning, during which protective arcs pop up from the rear seats. And if the car overturns with the roof up, the arcs “shoot” through the rear window, breaking it with the help of special spikes. Because of the need to reinforce the carrying bottom, the complex folding mechanism of the top, and the emergency arcs that extend during tipping, the convertible is heavier than the coupe. Especially for the C70, a new premium-class Dynaudio audio system with 12 speakers and two subwoofers was created.

Salon of both models on request trim leather and wood. The package includes: ABS with disc brakes on all wheels, front and side airbags, leather-covered adjustable steering wheel, electric windows, electrically adjustable rear-view mirrors, separate heater control for the driver and front passenger, immobilizer. Additionally, you can order wood trim in walnut or Scandinavian birch, automatically adjustable seats, rear-view mirror with anti-glare effect, alarm, on-board computer and one of the best stereos in the world. McPherson front suspension and multi-link rear.

The range of engines for the C70 is basic 2.4-liter (138 hp) or (168 hp) turbo-charged engines and a 2.5-liter (218 hp) turbo engine. KP selection - 5 or 6-speed manual gearbox or 5-step adaptive “automatic”. In the summer of 2006, the Volvo C70 coupe-cabriolet began to be sold in Europe with a new 2.4-liter five-cylinder turbo diesel engine with a power of 180 horsepower. Completed with such a car will be only a five-speed automatic transmission, with which the C70 can accelerate from zero to one hundred kilometers per hour in 9.5 seconds. The average fuel consumption of a diesel coupe-cabriolet is only 7.3 liters per hundred kilometers.

Swedish experts managed to combine high power characteristics with good fuel efficiency due to the use of a complex turbo-compressor with variable blade geometry. In addition, in the basic version, the engine is equipped with a carbon filter. In 2009, the model has undergone a slight restyling. The updated exterior and interior, upgraded engines and advanced basic equipment - these are the main details of the C70, which Volvo presented at the Motor Show in Frankfurt. The front of the machine was redone in accordance with the new corporate style. Pointed headlights, V-shaped hood, a new design of the front decorative grille - these are the main elements of the updated frontal part.

The front end, when rounded, was visually lightweight - this form should provide the best protection for pedestrians against injuries upon hitting. The back of the C70 has not undergone such dramatic changes, and yet its lines have become sharper and more refined. Rear lights look more modern due to the use of new achievements of light design. The updated gig added another body color called Flamenco Red Pearl.

The interior of the cabin has received new trim materials, in particular, the dashboard is decorated with aluminum inserts. Restyling did not help at least somehow to keep the interest in the car. In 2010, the Volvo plant in Uddevalla produced only ten thousand coupe-cabriolets C70. He was not popular either in his homeland or outside it. Due to the negligibly small production volumes, the Swedes plan to close their plant in Uddevalla in 2013.