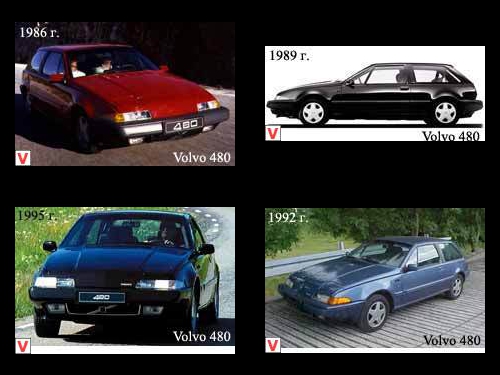 In March 1986, the Swedish company Volvo introduced its first front-wheel drive model, the Volvo 480. It became the founder of the 400th family. It was a sports 3-door car with a rare type of body - a coupe-wagon, almost vertical rear wall and retractable headlights. The latter are hidden inside the hood and raised with the help of an electric drive only when the dipped or main beam is switched on.

In short, the novelty has received a very extraordinary appearance. The seating formula was also quite unusual: instead of the usual five-seater cabin inside the Volvo 480 there were four separate seats with individual seat belts and the possibility of adjustment. There were only two engines on this model: a 2.0-liter 109-horsepower, 95 hp. with a catalytic converter and a dynamic 120-hp 1.7-liter turbocharged engine, which becomes truly frisky only when it reaches high speeds, but it is quite economical in the city (11.0 l / 100 km). In the most powerful version, it took at least 9 seconds for the 480th to accelerate from place to “hundred”.

Transmission to choose from, or 5-speed manual, or 4-band automatic. In the winter of 1990, a new 1.7-liter unit with an output of 102 hp appeared in the engine range. Salon by modern standards made rustic, however, no particular complaints on ergonomics do not arise.

The front console looks massive, but it is made by designers specifically - thus, sitting behind the wheel of a Volvo 480, a person has a sense of security. The instrument panel can be of two types - with a tachometer or clock. The latest version, of course, was installed on cheaper car modifications. However, in any case, there will be sensors on the dashboard informing about the tightly closed doors, the seat belt not fastened on the driver’s side, as well as the water level in the washer reservoir. In addition, the instrument panel is able to inform the driver about a light bulb in the brake light or side lights.

Volvo 480 is quite comfortable 'car for the driver', which is emphasized by the entire design of the driver's seat, the layout of which is focused precisely on the convenience and comfort of the driver. Behind, of course, there is not enough space and the entrance-exit to the rear row of seats is difficult. In 1993, the Volvo 480 was upgraded. First of all, it is worth noting the appearance of new optics and bumpers painted in body color. Hood combined with grille.

The car is designed to meet the high requirements for passive safety: it has a rigid cabin frame, reinforcing elements inside the doors and a safety frame under the engine. In addition, a specially designed steering column with a frontal impact develops without damaging the driver’s chest. The galvanized body is reliably protected from corrosion. The dimensions of the coupe Volvo 480 - 4258/1684/1318 mm. The wheelbase is the same for all versions of the 400th series and is 2502 mm.

The ground clearance is small - 110 mm. Trunk volume is only 161 liters, but it can be increased by folding the rear seats. With its small overall dimensions, Volvo 480 retained all the inherent advantages of the northern brand, such as: powerful anti-corrosion protection of the body, excellent heating (with heated seats) and ventilation, high overall reliability. However, the original appearance did not like the potential overseas buyers. In addition, there are claims to the quality of workmanship.

After a thorough modernization, the '480th' was offered for sale in Europe, but the high cost and inconsistency with the current sports car did not allow the company to achieve the planned sales volumes.