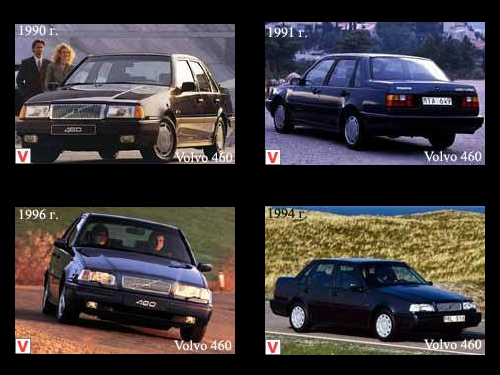 In June 1989, he made his debut elegant 4-door Volvo 460. This luxurious for those times executive class sedan produced at the Dutch plant. The car is built on the platform of the 480th Volvo model and belongs to the segment D. It has a transverse engine and front-wheel drive. Outwardly, it looked quite respectable and prestigious. The reaction of the public to this car was the most positive. Shoppers liked the compact and inexpensive Volvo 460 with a chrome grille and many other nice little things.

Inside, the center console was refined, where the levers of control of the ventilation and heating systems were replaced with more informative switches. After upgrading, cars began to have a fairly rich standard, ABS, airbag, etc. appeared. A few words about the suspension. Front independent - McPherson type, rear - also independent with separately installed shock absorber and spring. To improve the driving characteristics of the suspension is equipped with front and rear (on versions over 100 hp) anti-roll bar.

The rack-and-pinion steering has good feedback and sensitivity. The Volvo 460 braking system is distinguished by good performance and ensures high active safety. The front brakes are disc (on powerful modifications - ventilated discs), the rear ones are also disc ones (on cars of the early years of release - drum ones). The interior is very trivial, but everything is stylish, high-quality, thoughtful and functional. The successful shape of the front and rear seats, high-quality upholstery materials, good noise isolation and height adjustment of the steering column (in expensive trim levels) are a clear confirmation of this.

Depending on the modification, the instrument panel can be of two types: with fuel gauges and coolant temperature indicators, speedometer, large clocks, and also with a tachometer instead of the pointer clocks. There are lamps on both dashboards that inform about the oil pressure, the water level in the washer reservoir, brake fluid, the doors are not tightly closed, seat belts are not fastened, and that one of the front or rear lights or brake lights burned out. With the general simplicity of interior design, inherent to Volvo cars, all devices are read perfectly, and the buttons and control levers are located in the most successful places, and there are no problems with using them.

Thanks to the ignition lock illumination, it is easy to find it even at night, and if at night the rear passengers suddenly need light, then additional lamps built into the handles above the rear doors will help illuminate the interior. The dimensions of the Volvo 460 sedan are 4405/1678/1379 mm, the wheelbase is 2502 mm, the ground clearance is 125 mm. The useful volume of the luggage compartment is 453 liters. Special attention should be paid to the safety of the Volvo 460.

The car has reinforcing elements inside the doors, a rigid frame of the cabin and a safety frame under the engine. The steering column is designed in such a way that with a frontal impact it folds up without damaging the driver’s chest. The body is reliably protected from corrosion and has a 10-year warranty against rust. Reliability, stability, high quality - something like this can be described as a Volvo 460. Thanks to its functionality and comfort, the car has won many fans in Europe.