Subaru Legacy was first unveiled at the 1987 Chicago Auto Show. The serial model appeared in 1989. The car was offered with sedan and hatchback bodies, equipped with all-wheel drive transmission and engines with horizontal, opposite cylinders.

The basic version was equipped with a four-cylinder engine with a displacement of 1.8 liters and 110 hp. Under the order offered 2.0 l / 150 hp and 2.2 l / 220 hp turbocharged. The Japanese also produced 280-strong Legacy, but such cars were offered only in the domestic market. In January 1989, the standard non-turbo Legacy 2.0 set a world average speed record recorded by the International Automobile Association (FIA), breaking 100,000 km in 447 hours 44 minutes and 9.887 seconds at an average speed of 223.345 km / h. Stops were allowed only for refueling, changing oil, antifreeze, filters, candles, high-voltage wires, tires and, of course, pilots. 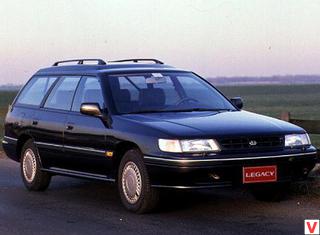 In 1993, Subaru launched the second generation Legacy. The car received a more spacious body, increased wheelbase. Exterior slightly updated - changed the grille, headlights, bumpers, etc. There are new power units - for example, a 2.5-liter 150-horsepower. In 1996, a modification of the Legacy Outback was introduced, isolated in 2000 into a separate model of the Subaru Outback. The third generation Legacy debuted in 1998, but in Europe it appeared only in 1999. Like the previous generation, the novelty had two main versions - a sedan and a station wagon, equipped with opposed four-cylinder engines, plus a permanent four-wheel drive. 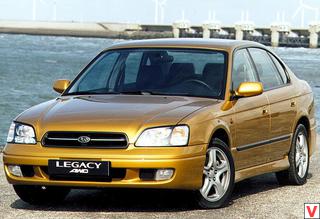 Two years later, in 2000, a completely new modification was included in the Subaru range, which allowed the Legacy model to stand on the same level as the prestigious European manufacturers. The only difference between this modification and the others was the three-liter 209-horsepower engine of a very rare configuration - w there are cylinders with an opposing arrangement. The debut of the fourth generation of all-wheel drive five-seat sedan class D Subaru Legacy was held in the fall of 2003. Japanese engineers managed to combine in safety controls, functionality and great design.

For the most part, the profile and style of the previous generation has been preserved, but at the same time new strokes have been added and the front end has undergone processing, which has given the car dynamism and beauty. Elegant appearance and soft smooth lines delight the eye. The unusual "cut" of headlights and a laconic grille gave a bright Legacy personality, while bumpers and bulging wheel arches emphasize the sporty character of the car. This generation received some elegance that the previous one lacked. The same energy in the forms inherent in the design and the back of the Legacy. 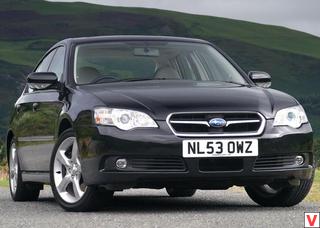 Equipped with the traditional Subaru horizontally opposed engine and symmetrical all-wheel drive, the fourth-generation Legacy will delight its owner with excellent handling. Under the hood, the choice of the buyer can be located several engines: 3-liter capacity of 250 hp, 2-liter turbo engine with a capacity of 280 hp and a new 2.5 liter turbo engine. Motors work either with a 5-speed manual gearbox, or with a 4 or 5-speed automatic. Updated Legacy different perfect aerodynamics; the coefficient of air resistance in a sedan is 0.28, in a station wagon, 0.30. 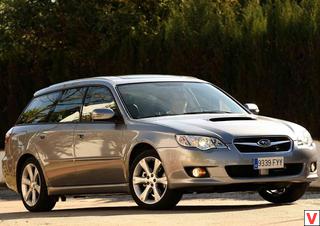 Legacy is the perfect choice for traveling through the streets of a big city. With a dynamic appearance, wide track, and a long wheelbase Legacy is very fast, but at the same time practical car. In 2007, at the Detroit Motor Show, the Subaru company unveiled to the public the Legacy 2008 model year cars that were redesigned. The event also hosted the premiere of Subaru Legacy 3.0 R Limited with a 6-cylinder engine. All models received brand symmetrical four-wheel drive. When looking at the Subaru Legacy 2008, the first thing to notice is the changes that have touched the grille, front and rear bumpers, headlights and taillights.

The model has established the latest development ofSI-DRIVE (Subaru Intelligent Drive). This is a system for controlling engine power depending on road conditions. CS-DRIVE allows the motor to operate in three modes: Sport, Intelligent and Sport Sharp. 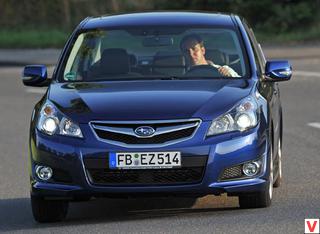 The premiere of the fifth generation Legacy was held at the New York Auto Show in spring 2009. The European public has got acquainted with a novelty on a motor show in German Frankfurt in the early autumn of 2009. The car is built on a new platform, which is designed not only to give passengers more space and make their stay in the cabin comfortable, but also to keep the vehicle focused on active road behavior. In comparison with previous models, the length of the car in the sedan has increased by 65 mm, and in the body of the station wagon by 55 mm. The wheelbase also increased by 80 mm, which positively affected the legroom of the rear passengers.

Design Subaru Legacy 2010 model year has undergone major changes compared with previous versions. Novelty acquired a more solid and serious look. The appearance of the car is different originality and originality. Designers thoroughly approached the case: slanted large headlights equipped with a three-dimensional internal structure; grille with a chrome crossbar and Subaru emblem, the simplest form of the lower part of the body; sleek, sporty cabin shape; chrome moldings, located around the perimeter of the side windows. Finally, Subaru decided to abandon its original frameless doors.

Due to low crash test results for side impact and acoustic discomfort. The fifth-generation Subaru Legacy Salon welcomes its passengers with sophistication, amazing space, comfort even in small things, and excellent quality of finishing materials. The dashboard is stylishly decorated: trim with decorative metallic inserts, instruments with white arrows and scales in a chrome frame.

All the necessary control buttons are within reach. Visibility at height: narrow racks and wide mirrors do not hide anything from the driver. Gorgeous leather seats with lateral support and powered with memory allow the driver and front passenger to find a comfortable position without any problems. Comfortable to the touch and easy to use new multifunctional three-spoke steering wheel, the steering column can be adjusted both in depth and in height.

The anatomical shape of the back of the sofa as if created for long trips. It can accommodate three adults: in the legs and the width of the space is enough for passengers of any size. Practical salon Subaru Legacy is replete with all sorts of shelves and drawers, coasters, connectors for various devices. The volume of the luggage compartment is 486 liters. Fully modernized Legacy has significantly improved its driving characteristics, it has become much more comfortable, more environmentally friendly and more economical.

Subaru's main trump card is still Symmetrical AWD brand symmetrical all-wheel drive in all trim levels. It is differently customized for all three types of engines, some of which have been upgraded and some replaced. Not without work on the modernization of the PPC - added a new 6-speed gearbox and CVT Lineartronic CVT.

The most "incendiary" Legacy GT with a turbocharged 2.5-liter power unit in combination with a five-speed automatic transmission is exclusively supplied only to North America and Russia. The 2-liter engine can work in conjunction with a continuously variable chain variator (CVT Linetronic) or a six-speed manual transmission, and the 2.5-liter engine is equipped only with a continuously variable "automatic". In the design of the engine, by the way, there was also a place for feat - the turbine was placed under the engine, which significantly improved the smoothness of the response and reduced the center of gravity.

Hill Holder will appear along with it to make you feel more comfortable when you have to move through the hills. Besides, In the cabin there were a lot of little things like the output under the iPod. All models are equipped with Thatcham 1 category alarm and immobilizer. The company renewed its voluntary participation in Euro NCAP crash tests (European Evaluation Program for New Cars).