Compact crossover Subaru Impreza XV made its debut at the 80th anniversary Geneva Motor Show. Sporty exterior, increased ground clearance and reinforced suspension favorably distinguished it from previous models. The exclusive design of the grille and extended wheel arches, a developed protective body kit, luggage rails and a massive rear spoiler make the Impreza XV recognizable from afar. Designers and designers gave the car the characteristics of both an SUV and a sports car.

Modified front bumper looks very solid. Feed new items has undergone significantly smaller changes. In addition to the aforementioned rear spoiler, the rear protection has been changed (now it stands flush with the bumper) and a little cosmetically corrected, the inner corner of the lamps has been tweaked. Lining of unpainted plastic sills and wheel arches testify to the practicality of the car. By the way, the version for the Russian market boasts increased ground clearance by 30 mm (up to 185 mm). That in a compartment with a full drive and allows to rank a car to crossovers. 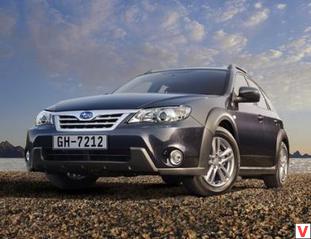 The suspension of the Impreza XV is also quite consistent with the ideas about the off-road performance of the car. XV has longer springs with increased compression resistance, more energy-intensive shock absorbers and thicker anti-roll bars. Silent blocks have become more pliable. The result was a suspension with remarkable energy consumption, and providing comfort and gambling handling. From the namesake of the version XV, only the salon got, and even minor improvements were made to it - the trim material became better, sports seats appeared with lateral support.

Landing, thanks to the increased "growth" of the car, has become much more convenient. Brown stitches on the door upholstery and the same color inserts on the seats added to the interior of the charm. The dashboard is not overloaded with unnecessary information, it is perfectly readable. 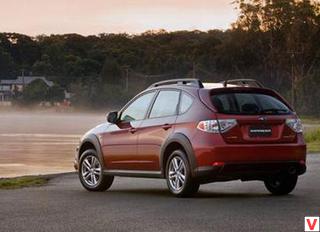 The center console and its layout are completely transferred from the previous model Subaru Impreza. Multifunction steering allows you to control most of the additional functions without interrupting the control process. Stereo acquired Bluetooth and USB interface. Noise isolation - at a height, at any speed in the cabin, you can whisper. The luggage compartment volume is 235 liters. However, the capacity of the trunk can be adjusted - the rear seats fold in the ratio of 60/40.

With the rear seats folded down, the volume of usable space increases to 1,130 liters. serious claim to success. In Russia, the Subaru Impreza XV is offered with a two-liter boxed 150-horsepower gasoline engine, aggregated with five-speed mechanics or four-speed automatic. The modification from the manual transmission is much faster than the automatic one - the acceleration time to a hundred is 10.3 seconds (and the “automatic” - 12.3), and the maximum speed is limited to 189 km / h (the “automatic” - 182). The declared Subaru fuel consumption for the Impreza XV is 8.4 liters per hundred in the combined cycle for manual gear changes, and 8.2 liters for the automatic.

Both versions are branded four-wheel drive Subaru Symmetrical AWD. The car with the "mechanics" - permanent four-wheel drive with a symmetrical differential, locked by viscous coupling, simply and efficiently. But such a construction does not provide complete blocking. But there is a multiple ratio, with a gear ratio of 1,447. The version with the “automatic” transmission is different, with a multi-plate clutch in the rear wheel drive. However, it is impossible to call the Impreza XV drive connected - part of the moment is still constantly transmitted to the rear axle.

Complete locking of the coupling is theoretically possible. The compression ratio of clutches constantly varies and depends not only on the front wheels slip, but also, for example, on the position of the accelerator pedal.