The Smart Fortwo is a minicar two-seater coupe that was first introduced by the British company Smart GmbH (a subsidiary of Daimler AG) at the Paris Motor Show in 1998. The name of the car "Fortwo" comes from the phrase "For Two", which translated into Russian means "For two." Currently, models of this class are called "City Coupe" ("urban coupe"). To date, two generations of this model have already been presented.

The first to undertake the creation of such a coupe, was the company Mercedes, which released the Mercedes A-class, but the project was not successful, because the safety of this car left much to be desired (this mainly concerned the results of tests on the stability of management in emergency situations). At this time, the company Smart decided to do this project, as a result the car was completely revised and received costly improvements that affected the body structure, handling and technical equipment of the car. However, initial sales were significantly lower than planned. 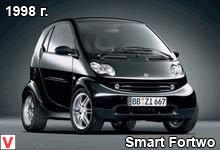 Production volumes had to be reduced from 200 to 80 thousand cars a year, which was quite hard for a new company with only one model produced. As for the construction itself, it is based on a solid steel frame called "Tridion", which surrounds and protects passengers, determining the shape of the car and the design. Plastic body panels are attached to it, which can be changed without any problems. The wheelbase of the first generation Smart Fortwo was 1,810 mm, 2,500 mm long, 1,510 mm wide, and 1,500 mm high.

Initially, the Smart Fortwo model was presented in a complete set with a 0.6-liter gasoline three-cylinder turbocharged engine, whose power was 50 hp, but after the first restyling it was replaced with a similar 0.7-liter engine with 61 hp. Later coupe already presented with a turbocharged diesel power unit with a volume of 0.8 liters and a power of 40 hp. All engines were located behind. Paired with the engine worked 6-speed semi-automatic gearbox. In 2000, the Smart Fortwo was launched as a targa with removable roof panels.

On November 10, 2006, Smart presented the second generation of the Smart Fortwo car, which included a new frame design, updated exterior elements (headlights, and some body panels), as well as new technical equipment. Slightly increased the size of the car. The wheelbase is now 1 870 mm, length - 2 690 mm, width - 1 560 mm, and height - 1 540 mm. As for the engine, a 1-liter gasoline three-cylinder power unit began to be installed here, which can be equipped with a turbine. The power of the turbocharged version is 71 hp. The transmission is also semi-automatic, but already five-speed.

It is worth noting that in 2002 a limited series of open-top Smart Fortwo was released, called “Crossblade”. In addition to the roof, this version did not have a windshield and doors. In 2005, in Frankfurt, the next version in the body of a convertible called the “Crosstown”, which had a folding windscreen, was presented, however, the producers have not yet reported anything about the further fate of this modification. In 2007, the Fortwo version with a hybrid drive was introduced at the Frankfurt Motor Show, sales of which started as early as October 2007. Production of the Smart Fortwo model continues at the present time. 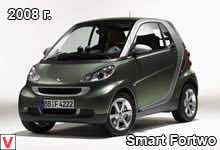 It is known that at present in London tests of the new version of Fortwo with an electric motor with a capacity of 41 hp are being conducted. According to preliminary data, the maximum speed of an electric car will be 112 km / h, and acceleration from zero to 100 km / h will take 6.5 seconds. The battery charge will allow you to drive 116 km, and a full charge will take about 8 hours.