The Saturn Vue is a compact crossover that was first introduced by the American car company General Motors under the brand name of its subsidiary Saturn in 2002. This model is the first built on the platform of GM Theta, as well as the oldest model, which is produced under the brand Saturn, after the L-series cars were discontinued. The Saturn Vue car also has other names (and is offered under other brands) depending on the market.

For example, in Europe and Mexico it is sold under the name Chevrolet Captiva, in the Middle East - GMC Terrain, in Oceania - Holden Captiva, in Great Britain and Elandia - Vauxhall Antara, and also in some countries this model can be found under the name Opel Antara. For all the production of the Saturn Vue crossover, two generations of this car have already been represented. Production of the first generation was organized in 2002 at the Spring Hill plant of General Motors. The car was based on a unified platform with models such as the Chevrolet Equinox, Pontiac Torrent and the European version of the Opel Antara crossover. 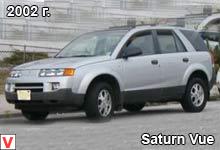 Under the hood was a four-cylinder Ecotec engine with a 2.2-liter capacity and 143 hp. Together with the four-cylinder powertrain, the transmission was a VTi variator (CVT) transmission type. In 2004, a three-liter six-cylinder L66 V6 power unit from Honda was proposed for the Saturn Vue, whose power was 250 hp. As for the transmission, the Honda 5-speed automatic gearbox was also used here. Also this year, a version of the car called the “Red Line” was presented, which had an L66 V6 engine, a suspension with sporty settings, 18-inch wheels, chrome-plated exhaust pipes, and a special black leather trim and high-quality audio system. In 2005, four-cylinder engines and CVTs were discontinued.

In 2006, the crossover has undergone some changes in the exterior and interior. Better materials were used in the interior trim, and as for the exterior, a new front bumper and grille were developed. Also from this year, the car was equipped with the OnStar global navigation system, a cruise control system and automatically switched on headlamps as standard. In 2007, a Saturn Vue version called the Green Line was introduced, which had a hybrid drive. It used a hybrid powertrain Ecotec DOHC 2.4-liter and 170 hp, equipped with a BAS system. The essence of the system lies in the fact that it stops the engine, switching the car to power when the car rolls or stops. 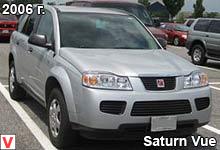 In 2007, at the Los Angeles car show, the second generation of the Saturn Vue crossover was presented. However, the first demonstration of the design of the car of a new generation was held at the international salon in New York in 2006, which was presented as a Saturn PreVue concept. The Saturn Vue model of the new generation also had a sports version of the “Red Line” and a modification with a hybrid drive under the “Green Line”. For the car, three engine options were offered: a 2.4-liter base four-cylinder Ecotec engine (for the hybrid version with BAS), and six-cylinder power units LZ4 V6 and LY7 V6 with volumes of 3.5 (222 hp) and 3.6 (257 hp) .) liters respectively. 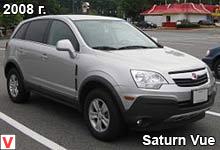 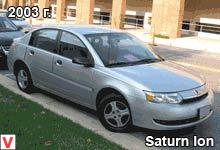