Renault Sandero - five-door hatchback class "B", created on the platform of Logan. Development began in 2005. Full-scale production of Renault Sandero at the plant. Ayrton Senna in Brazil began in December 2007. Sold in Brazil, and since February 2008 - and in Argentina.

On the relationship of Sandero with the most popular sedan in the country Renault Logan outwardly nothing resembles. Sandero has its own unique personality. Expressive streamlined headlights, bumpers and sills look more interesting than its single-platform, and a wide grille gives the car a sportiness. The trunk is smaller than the Logan, - 320 l. against 510 l.

the sedan, but the lack of a partition between the trunk and the cabin, a wide opening of the luggage compartment and the ability to fold the rear seat gives access to 1200 liters. cargo volume. Salon Sandero is not much different from the cabin of its single-platform. Insignificant changes include a visor made of soft plastic over the devices, an insert on the center console “under aluminum”, silver-colored edging of air ducts. 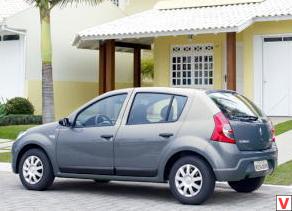 Changed the style of the steering wheel, in expensive trim wheel is adjustable in height. Comfortable fit in the car provides a wide angle door opening. On the doors, instead of stamping, full-fledged, strong handles appeared. True, only on the front doors, behind instead of handles left old scanty pockets. Starting with the Expression version, front electrics are included in the Sandero package. It is possible to install the air conditioner as an option. Sandero and Logan are unified by about 70%, including the models have a common range of powertrains and transmission.

The base engine for the Renault Sandero is a 1.4-liter, 8-valve petrol engine with 75 hp, a 1.6-liter engine in 8-valve (84 hp) and 16-valve (102 hp .) modifications. The only gearbox available is a 5-speed manual transmission. The transmission is distinguished by a robust design and well-chosen gear ratios, a little tight, but precise gear shifting. It is planned that in late 2010, Avtoframos will master the production of Sandero hatchback with automatic transmission. The front suspension is a pseudo-McPherson with a triangular lever, the rear one is an H-shaped axis with programmable deformation, and is connected to vertical shock absorbers and helical springs.

The suspension is elastic and long-stroke, which has a positive effect on the quality of driving and is the best option for domestic roads. Now a few words about security. Up to two airbags can be installed on the Sandero (the basic equipment only offers the driver’s airbag), the cabin has five three-point seat belts, the driver and front passenger belts are equipped with pretensioners and force limiters. According to the crash test EuroNcap car received three stars for the protection of an adult passenger.

The base equipment for Renault Sandero is called Authentique, the second equipment version is Expression, and the maximum grade is Prestige. In the latest version, the back of the rear seat folds in relation to 1/3 (or 2/3), in cheaper versions - in relation to 1/1. 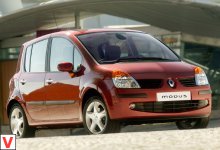