Logan debuted in the fall of 2004. Production was established in Romania, the car is supplied to the markets of the third world countries. In Romania, goes under the brand name Dacia, now owned by a French company. In 2005, Logan began to produce in Moscow under the brand name Renault. Having estimated the opportunities of the markets of Eastern Europe, Asia and Africa in time, the company's marketers decided to enter these territories not with a converted car from the current model range (as it used to be with Clio), but with a new car. Designed in record time, in just a couple of years, Logan has a roomy body, a modest design without any frills and a fairly modern interior.

At the heart of Logan is the platform "B", on the basis of which built the Renault Modus, Nissan Micra and the latest generation Renault Clio. The exterior was designed in accordance with the proprietary concept of "strength and quality." The design of many straight lines that can be traced from the hood to the rear bumper, which gives the car a rather dynamic look. Appearance is in perfect harmony with the interior Logan - a minimum of luxury with the highest possible functionality. From an aesthetic point of view, the main advantage of the cabin is the front panel. 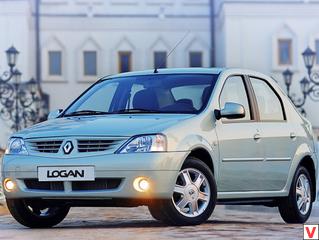 Despite the fact that it is clearly made of materials of far from superior quality, everything looks quite presentable: round duct vents, a hemispherical dashboard visor, finished with polished aluminum center console with large buttons and switches. A rather large three-spoke steering wheel, borrowed from the Clio, came quite to the point. The rest of the interior special stylistic delights are no different. Salon Logan is simple and unassuming: light gray plastic, soft fleecy ceiling, cloth upholstery, black carpet on the floor. Quite roomy in the backseat rather comfortably arranged a company of three people.

In addition, there is one indisputable advantage - all panels are made and fitted with almost perfect accuracy. All the necessary controls are focused on the steering column switches and the center console, which is very convenient. It is noteworthy that the driver's seat has a minimum of adjustments, and the steering column does not move at all. Changing the height of the seat cushion is possible only in the Privilege package. Given the need to facilitate assembly, which is produced outside French enterprises, body parts are not particularly complex, many components are not made of high-tech, but reliable and simple. 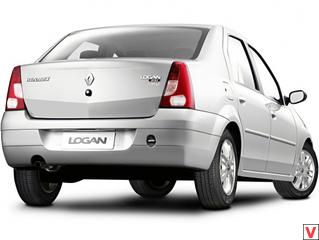 For example, the exhaust system consists of one element, the fuel tank has an additional removable filter, and the mirrors and moldings are made the same and can be mounted both on the right and on the left side of the car. In the development of Logan actively used components and assemblies from other models of the brand. Take at least the suspension - the front uses a pseudo-McPherson design with lower triangular levers, developed on the basis of the Clio II suspension, while a semi-dependent H-shaped cross member with longitudinal levers, borrowed from Renault Modus, is installed at the back. From the new Modus got all the heating system.

The electronic unit, the buttons of which are usually located on the front console, migrated from Twingo, and from Espace, the car received cooling system deflectors and a KP backstage handle. But Clio gave Logan most of all - engines, steering, rear brakes, instrument panel, door handles, steering wheel and steering column switches. Dimensions of the car are 4250/1735/1525 mm. The width of the cabin on the shoulders in front of 1380 mm, rear -1400 mm, maximum height of 1220 mm, 155 mm ground clearance. It weighs only 975 kg sedan. The luggage compartment volume is 510 liters. The range of engines consists of two eight-valve petrol injection engines: a volume of 1.4 liters. 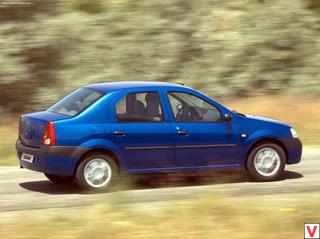 and a power of 75 hp, a volume of 1.6 liters. and power 87 hp All power units are equipped with five-speed manual gearboxes, which have already proven themselves on the Clio and Kangoo models. There are several complete sets: Logan, Ambiance, Laureate, Laureate Plus. The top version of Logan is equipped with power steering, anti-roll bar, dual airbags, ABS with EBD and R15 wheels. Basic equipment includes driver's airbag, 14-inch wheels, black bumpers. The Ambiance version adds central locking, fabric inserts on the doors, remote mirrors, tinted windows, height adjustable straps, painted bumpers, moldings and wheel covers and an ashtray in the form of a cup.

Finally, the richest grade Laureate Plus on top of the listed sports air conditioning and, of course, a 1.6-liter engine. On the car disc brakes are installed in front and rear drum. The body has a full anti-corrosion treatment, 70% of the panels are galvanized. The basic equipment Logan includes metal protection of the crankcase of the engine, fuel and brake lines. Logan from the French turned out practical, reliable, and most importantly economical. The successful combination of price and quality led to the incredible popularity of the car on all five continents, so in 2009 an updated version was released. The car began to look more modern. 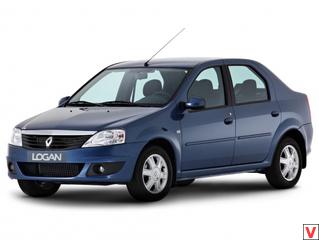 The exterior has gotten more sleek and elegant forms, has got a new grille with a chrome strip, updated front optics, other front and rear bumpers and larger side mirrors, which have noticeably improved visibility on the sides. The back of the highlights of the updated lighting and improved geometry of the trunk lid. Completing the picture of a new alloy wheels and extended colors. In short, Logan noticeably prettier. The interior decoration after the upgrade has changed little. Interior lines have become smoother, without sharp corners and transitions.

Ridiculous pockets disappeared from the doors, and their place was taken by full-fledged, elegantly curved handles, smoothly turning into armrests. The handles themselves are finished with high-quality plastic for metal and have the shape of a bird's wing. New three-spoke steering wheel in the top configuration trimmed in leather. The instrument panel on the top machines has a matte light scale. 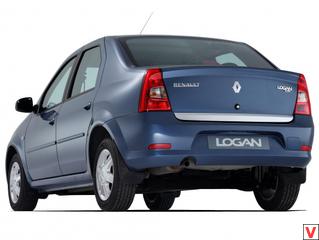 The restyled Logan has 3 engines: a 1.4 liter, 75 hp, and two 1.6-liter engines, 84 hp. (8-valve) and 102 hp (16-valve). The latter appeared in the car after the update. The car received more rigid elastic elements of the suspension and lost the anti-roll bar.

The increase in stiffness of silent blocks, springs and shock absorbers allowed to achieve a three-fold increase in transverse stiffness in front and two-fold - on the rear axle. As a result, even without the anti-roll bar, the ratio of the angular rigidity of the leading axle remained at about the same level as the first Logan with a stabilizer: 54.4% versus 54.5%. These changes not only affected the technical attractiveness of the machine, but also made it more stable.

Also improved aerodynamics and handling. The choice is still offered four levels of equipment: Authentique, Expression, Privilege, Prestige. The difference in the nuances: fog lights, alloy wheels, air conditioner, heated seats, ABS and a second front airbag. At the Motor Show in Geneva in 2013 should be held the premiere of the second generation Logan.