At the Moscow Motor Show 2010 took place the world premiere of the business sedan Renault Latitude, which is the flagship of the French brand. The car can be called international, as it is a joint development of designers Renault and Nissan. The Latitude is based on the extended platform of the Korean model Samsung SM5. The dimensions of the car are impressive: 4897 mm in length, 1832 mm in width, 1483 mm in height, and the wheelbase stretched to 2762 mm. Sedan got quite an interesting design. The front part is remembered by a solid chrome grille with a large branded diamond in the middle and a slightly concave hood.

Large headlights stretched horizontally so that their corners slightly go to the side of the car. Solid Renault Latitude adds a glass roof in the cabin - it is tinted in such a way that it seems completely black on the outside. The front bumper is slightly forward, and the fog is deeply recessed in rectangular niches, so that the front of the car seems wider and more powerful. The classic middle line, slightly rising from front to back, has not once been tested by the designers of the company, makes the contours of the car very harmonious, brings its style closer to the classical one. The stern, thanks to the wide lanterns located partly on the trunk lid, It looks solid, but not heavy. 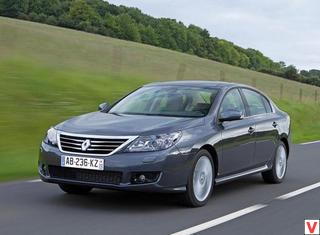 Even a large trunk (511 liters) does not make the Latitude car cumbersome. Finishing and interior design are fully consistent with the level of business class. The interior has leather trim, chrome dials, control knobs and other devices, and in the expanded configuration - inserts made of natural wood. Under the gearshift lever there is a rare chip, even for a car of this class - a universal telephone and navigation control unit. The front seats are regulated in all possible planes, and in the expanded configuration they are also equipped with a memory of settings and a massage insert.

A comfortable seat with five massage bellows, works in four modes: constant, alternating, soft and strong. The exact effect on the spine area of ​​synchronously working elastic pneumo-massagers has a general beneficial relaxing effect during long journeys or long stays in traffic jams. On the back of the couch is spacious even three passengers. But if we confine ourselves to two passengers, then they will have a lot of extra amenities, in particular, a table with holders for two cups, which is being lowered from the back. For a fee, a three-zone climate control is offered, which allows you to set individual settings for the driver and each passenger. 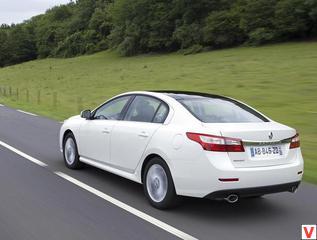 Also, the car is equipped with a control system of air quality in the cabin. In addition to the combined carbon filter that does not allow pollen and odors to enter the cabin, the Renault Latitude has a dual-mode air ionizer. It not only fills the interior with beneficial negative ions, but also clears the air of allergens and pathogenic bacteria. Also, the driver and the passenger can use air fragrance with two separate cartridges. Under the hood for the Renault Latitude are two petrol power units - a 2.0-liter engine producing 139 hp.

working together with a continuously variable CVT, as well as a more powerful 2.5-liter V6 with a capacity of 177 hp aggregated with a six-speed automatic transmission. The maximum speed of the sedan with this engine is 209 km / h, and the average fuel consumption of 9.7 liters per 100 km. Three turbo diesel engines of 150, 175 and 240 hp are available to European buyers. The top speed of the Latitude with the most powerful six-cylinder diesel engine is 235 km / h, and acceleration “to a hundred” takes 7.6 s. Note that Latitude inherited the front suspension from Renault Laguna and the rear multi-link suspension from Nissan. The car has modern active and passive safety systems. 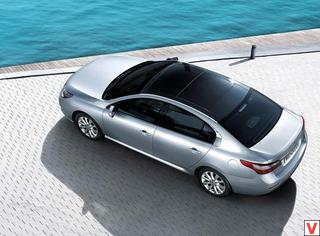 Basic equipment includes six airbags, three-point seat belts, ABS and emergency braking system. The steering column is designed (according to Renault specialists) so that it does not pose a danger to the driver during heavy braking. Probably, the whole thing in a somewhat unusual, more gentle slope of the steering wheel. Already in the basic configuration, Latitude has the ability to connect electronics via Bluetooth and the 3D Sound by Arkamys audio system with CD-MP3 and 6 speakers. In the top-end configuration, the business sedan is additionally equipped with two speakers and a “Plug & Music” system, which allows you to connect most external players, including the iPod.

As an option, an exclusive Bose Sound System with 10 speakers with a multi-channel amplifier with equalizer is offered. The list of various options is extremely wide.