The joint development of Renault and Nissan - Renault Koleos saw the light in 2008. If we owe the birth of the design to the French, the Japanese presented the Koleos with a power unit, a platform of the X-Trail model, a suspension bracket and an All Mode 4 × 4-i all-wheel drive system with descent and ascent systems. The car is produced at the factory Renault Samsung Motors in the city of Buzan in Korea. Exterior Koleos received brand Renault brand features. 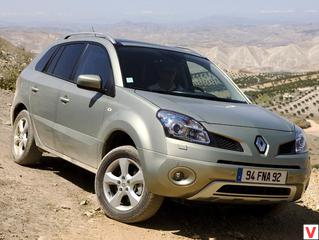 The cabin is endowed with a lot of space, high front seats are not only comfortable, but also provide good visibility. The driver's seat also has a height adjustment. Placement of all controls is carefully thought out. Rear sofa accommodates three passengers who will feel completely comfortable.

Koleos has everything you need to create comfort. An individual microclimate in the cabin is created thanks to a two-zone climate control. Installs a premium Bose® audio system designed specifically for this car. It provides the highest quality sound. 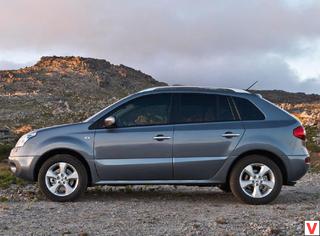 The refined interior is complemented by a large glass area and a panoramic sunroof, making it very light in the cabin. The car is equipped with additional options such as the “Free Hands” chip card, cruise control, light and rain sensors, and automatic parking brake. Koleos was given a 450 liter bulk trunk, which can be increased to 1380 l at the expense of folding rear seat backs. For transportation of lengthy seats, the front passenger seat can be folded into the table position. The two-piece door provides easy access to the luggage compartment. In the parking lot, you can tilt the lower section and use it as a support (can withstand loads of up to 200 kg).

In the cabin there are numerous storage compartments for placing and storing small items. Under the hood, Renault Koleos gasoline engine of 2.5 liters capacity of 177 hp The motor confidently accelerates the car to 100 km / h in 10.3 seconds with a variator and 9.3 with mechanics. Renault Koleos is designed for driving in a big city, as well as for traveling on country roads and poor roads. Thanks to the intelligent all-wheel drive system from Nissan, as well as the built-in stability control, the driver feels complete control over the car during the trip. 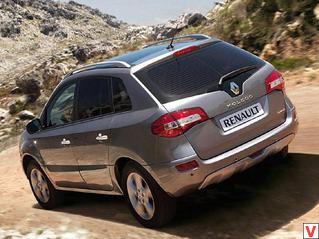 The impressive ground clearance of 206 mm, the angles of entry and exit allow the car to move in complete safety on the heaviest pavements: on dirt roads, on snow, ice, mud. The all-wheel drive intelligent All Mode 4x4-i system, in combination with Stability Program (ESP), ensures optimum traction with the road thanks to the precise distribution of torque between the wheels. Good build quality allows Renault to provide Koleos owners with a 3-year or 100,000 km warranty (whichever comes first). After four years on the European market, the model has not gained much popularity. In 2011, the updated Koleos was presented at the Frankfurt Motor Show.

The car has received a new exterior and interior design. True, the designers had enough effort only on the front part of the body: the feed was preserved in its previous form. They put in front a powerful chrome grille, which the previous version practically did not have, a prettier optics and a new bumper, and repeaters of direction indicators on the LEDs were integrated into the housings of the side mirrors. From the previous version, the car inherited high ground clearance and bulging wheel arches. New model has received and new color. Now buyers will be able to buy a car in the bright color of Orange Cayenne. 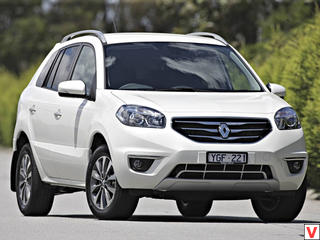 Despite the changes, the overall dimensions of Koleos have not changed. Depending on the country, the SUV is available with a 2.5-liter TR 25 petrol engine with 170 hp. or two 2.0-liter diesel engines for 150 and 173 hp By the way, the updated Koleos is notable for reduced CO2 emissions.

So earlier, diesel engines emitted 167 and 174 g / km, respectively, and now these figures have decreased to 148 and 166 grams of C02 per kilometer. In September 2011, the restyled model Koleos 2012 was presented at the Frankfurt Motor Show. The most significant changes were made to the front part of the car. The first thing that catches your eye is a completely different grille. A massive shield with a large number of rounded corners and three shiny moldings no doubt gives the appearance more solidity. 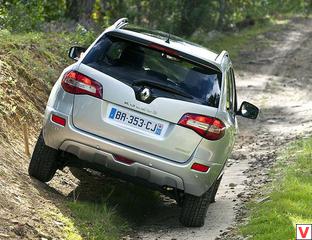 The new molding of the front optics is not noticeable so clearly. The modified bumper has a more complex architecture, the top fogs are underlined by shiny cilia. Massive wheel arches, high ground clearance, sports wheels with alloy wheels and tires with low resistance give the car a more dynamic appearance.

The profile almost did not undergo interventions. The mirrors have received LED turn signals, a new spoiler is located on the fifth door. Feed remained the same. A pleasant form of optics, a stylish transition from a glazed part of the back door to a metal one, successful forms of stamping and a pseudodiffuser at the bottom of the bumper, all these elements create a picture of the integrity of the image. 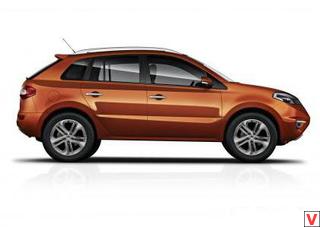 The list of changes in the interior is even more modest. New high-quality materials give the salon elegance. The instrument panel consists of three round instruments with a speedometer in the center. The red alarm button turned black with a small emergency gang icon in the center. White instrument lighting replaced the orange one. Renault engineers have noticeably worked on the cabin soundproofing. Climate control air ducts are prudently not only built into the front panel and hidden under the seats, but also brought into the central pillars, which has a very positive effect on the heating rate of the entire cabin.

Retractable curtains on the rear doors reliably protect from the scorching sun. Also Renault Koleos 2012 boasts natural interior lighting, thanks to the panoramic sunroof on the car (optional). The driver's seat adjustment range is extensive. The back can even be set vertically.

In the pre-reform car, the head restraint strongly rested against the back of the head, and now it can be adjusted. The premium Bose audio system, which was individually designed for Koleos based on the characteristics of the interior, offers excellent surround sound and intuitive controls. Inside, the abundance of all kinds of drawers and glove compartments. The rear row of seats itself is in the ratio of 60:40. If, in addition to the second row, the backrest of the front right seat is also folded, then the cabin can carry items up to 2.6 m in length.

The luggage compartment has a volume of 450 liters and can be easily increased to 1380 liters by folding one backrest of the rear seats, providing This flat floor for unhindered loading of large baggage. Access to the cargo compartment is through a double-wing rear door, the lower part of which can withstand up to 200 kg. In Russia, the car comes with the same set of engines: a 2.5-liter gasoline volume (170 hp, 226 Nm) and a 2-liter turbodiesel (150 hp, 320 Nm). In the first case, a 6-speed “mechanic” or CVT variator is offered as a transmission, in the second - only a 6-speed “automatic”.

With geometrical indicators of permeability, everything is fine with Koleos: the angle of entry is 27 degrees, the exit is 31 degrees, and the clearance of a diesel car is 188 mm, and that of a gasoline car is 206 mm. The Koleos 2012 version offers a 4x4 all-wheel drive system developed by Nissan, which provides the crossover with precise steering, confident behavior both on and off the road, as well as excellent maneuverability, so necessary in urban environments. The all-wheel drive system works as follows: when driving in normal conditions, the full torque is transmitted to the front axle, in case of an emergency, the electronics can redistribute 50% of the torque to the rear.

It is possible to select the optimal mode manually. For example, forcibly leave only front-wheel drive (2WD mode), or force the system to rigidly distribute the thrust in a ratio of 50:50 at speeds up to 40 km / h (Lock mode is ideal on rough terrain). In addition, all-wheel drive 4x4 versions are equipped with assistance systems for climbing uphill, which does not allow the car to roll back, and when driving downhill, in which the help system will not allow the Renault Koleos 2012 to pick up speed.

The company reports that thanks to the system of dynamic stabilization, assistance with emergency braking, the body structure of the Renault Koleos with parts deformed during a collision and a complete set of six airbags, the crossover earned the highest, five-star safety rating of EuroNCAP. The manufacturer acknowledged that the update, which the car was subjected to in 2011, was superficial and hasty, and therefore had no effect on the increase in consumer demand. Therefore, in the summer of 2013, Renault demonstrated the 2014 model year Koleos at the auto show in the Argentinean Buenos Aires.

It turns out that this version is the second restyling of the model in its entire five-year history of existence. As a result of this restyling, the crossover acquired the features of a corporate style in which modern Renault models are executed. Cardinal changes in the exterior of the car is not observed.

Designers are limited to only minor changes in front of the car. The crossover received a modified front bumper, a V-oboznuyu grille with a large emblem of Renault and stylish chrome moldings on the sidewalls. In addition, I got a new wheel pattern and an additional color option called Ebony Brown. To match the latter, another interior design scheme appeared. The rest of the Koleos exterior remained the same, since the overall design concept of the model remained unchanged. This was confirmed in the unchanged dimensions of the car. It was possible to refresh the interior by applying new, higher-quality finishing materials.

From now on, the R-Link multimedia system with a 7-inch touchscreen, a Bose audio system, a rear-view camera, a dead zone tracking system, as well as assistance systems for descending and starting from one place to another are now available as options. And one more small touch, now the lower part of a double-wing tailgate can hold a load in excess of 200 kg. In terms of technical equipment Koleos remained the same. Under the hood all the same 2.5-liter gasoline engine with a capacity of 171 hp is working. This engine meets the environmental standards of Euro-4.

The multi-point injection system of the 95th gasoline allows you to set a maximum torque at 226 N * m, while the crossover has a maximum speed of 200 km / h and its acceleration to 100 km / h is 9.3 seconds (10.3 seconds with automatic transmission ). Motor moderately economical and requires an average of 9.6 liters of gasoline per 100 km. But instead of a 150-horsepower two-liter diesel engine, we now decided to supply us with a 173 hp engine. similar working volume. The peak torque here is 360 Nm, which allows you to reach a speed of 100km / h in 11.9 seconds. This motor is well known to European buyers of the model, but in the Russian market is presented for the first time.

This engine fits into the strict standards of Euro-5. The list of installed gearboxes will not change either. For the gasoline engine, the French offer a six-speed manual gearbox or a continuously variable CVT. For a diesel engine - six-range "automatic". It is noteworthy that the petrol modifications have a ground clearance of 206 mm, while the diesel versions have a clearance of only 188 mm. In this case, the samples intended for other markets, landing a little lower.

The “Dynamique Confort” package allows you to choose between a gasoline engine paired with a variator or a diesel engine with an automatic transmission. The top performance "Luxe Privilege" offers a car with a gasoline engine and a CVT.