The friendly Kangoo family, which includes a wagon and an all-metal Express van, opens the Renault range of commercial vehicles. In 2005, Kangoo was noticeably updated. The upgraded version features styling in a new corporate style of the company, fog lights in the list of basic equipment, improved interior trim materials and much more. Since 2003, in addition to the front-wheel drive versions, it is possible to order Kangoo 4x4 variants with all-wheel drive automatically connected. Kangoo is a practical car designed to be useful in everyday life.

Roomy, with a reinforced rear suspension, it will not only accommodate the entire family in the cabin, but also take on a large amount of cargo on board. The maximum amount of luggage compartment of the van is 2750 liters, and for the station wagon, this figure ranges from 650 to 2600 liters. The expressive design and noble lines give Kangoo French charm. Original headlights, sloping front hood, taillights of modern form - it all looks harmonious and sophisticated. Salon Kangoo is designed so that all passengers feel comfortable, cozy and comfortable. Two sliding side doors facilitate entry into the car. A well-organized interior space provides many opportunities. 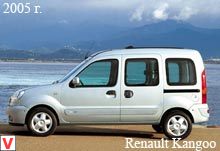 The back seat can be folded down a third or completely. A large convertible luggage compartment is closed by a shelf, which hides its contents from prying eyes. In addition, in the luggage compartment there are mounting rings on the floor and a safety net, thanks to all of the transported items are securely fastened and kept from moving into the cabin.

Carefully thought over ergonomics of the driver's seat makes driving easy and enjoyable. Kangoo is equipped with power steering, central locking with remote control, front electric windows. By the way, one more indisputable advantage of this car is low fuel consumption. Renault Kangoo is considered a class leader in protecting passengers in a collision. It is designed to minimize the effects of a collision. Its design with programmable deformation ensures the integrity of the cabin upon impact.

Passenger safety is guarded by two frontal airbags and three-point seat belts with a programmable holding device. The Renault protection system for thousands of seconds simultaneously activates airbags and seat belts, equipped with pretensioners and force limiters. This prevents excessive pressure on the head and chest. The emergency braking system operates in conjunction with the latest generation ABS, which includes an electronic brake force regulator. And the system of anti-theft lock-up of the engine start and the system of automatic locking of the doors not only protect during the movement, but also eliminate the intruders.

Gather Kangoo in Mobazhe (France), Casablanca (Morocco) and Cordoba (Argentina). Improving with each new generation, Renault Kangoo becomes more comfortable and convenient. Another restyling of the model occurred in 2013. The French have updated the front of the car in accordance with the current design concept of the brand. 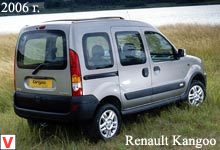 The exterior has acquired more powerful and confident features with taut "muscular" lines instead of the previously rounded. From the pre-reform version of the Kangoo 2013 can be distinguished by a different grille, upgraded head optics, other side mirrors and updated rear lights. The Renault emblem has become more visible and contrasts with the black grille behind it. A large rounded bumper protrudes beyond the hood, adding confidence to the image of the car. There were also some changes in the cabin - the car received a new steering wheel and a different center console.

The manufacturer also claims to improve the quality of finishing materials. An innovation for the Kangoo cargo is a version with two full-fledged seats for adult passengers, with the possibility of transforming one of the seats into a small table. New options, such as a panoramic roof, a hatch for long items, significantly expanded the functionality of Kangoo. Salon Kangoo, in general, is pleased with the forethought and abundance of places for storage of personal belongings of the driver and passengers.

In the Russian market, Kangoo 2013 is offered in two trim levels - Authentique and Expression. The standard equipment package of the Renault Kangoo 2013 includes ABS, driver and passenger airbags, audio package, central locking, and front electric windows. In addition, the car has electric power steering, cigarette lighter, ashtray, socket, lockable glove box and much more. Expression Kangoo has a large arsenal of tools: sliding doors are both doors, the driver's seat is height adjustable and has a built-in heating system, air conditioning, a modern audio system, a panoramic mirror and a front armrest, under which is an additional storage compartment, etc.