The premiere of a full-size luxury car category Oldsmobile Toronado took place on July 29, 1965, and since the autumn of the same year, its serial production began at the General Motors concern plant in Lansing (Michigan). In this class, the model competed with Ford Thunderbird, Buick Riviera and Cadillac Eldorado. Toronado was produced until 1992 in four generations. The Oldsmobile Toronado was produced on the same platform with the Buick Riviera and Cadillac Eldorado E. It had a 2-door coupe body and was front-wheel drive. It can be argued that the Oldsmobile Toronado was the “firstborn” of the new style direction of the second half of the 60s - “Muscle cars”. 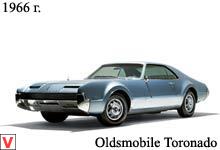 Thanks to the special layout of the power elements, the floor in the cabin was even. The elongated doors provided a fairly comfortable fit for passengers on the bucket front and rear seats. The car was equipped with gasoline engines Rocket OHV V8 of 7 liters with a maximum power of 385 hp (4800 about) and the twisting moment of 644 Nanometers (3200 about). Despite the decent weight of the dynamics of the model is such that acceleration to 60 mph (97 km / h) took only 7.5 seconds, and the maximum speed reached 217 km / h. Since 1968, production of cars with a more powerful 7.5-liter engine (375 hp / 4400 rpm and 400 hp / 5000 rpm for the W-34 version) began.

Torque has become even more - 691 Nm / 3000 about and 678 Nm / 3200 about, respectively. Engines are aggregated with a heavy-duty 3-speed automatic transmission Turbo-Hydramatic. The suspension on the Toronado was installed in front of the torsion bar and a multi-leaf spring at the back: somewhat stiff, but providing directional stability in the corners. Brake mechanisms were initially installed drum, and since this became the weakest link in the design of the machine, from 1967, front disc ventilated brakes were optionally supplied. 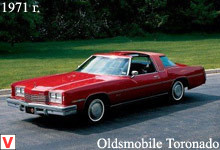 Despite this, in 1966, Toronado became the "Car of the Year" as acknowledged by the American magazine Motor Trend and earned several other titles from automotive publications. In the first two years, its production was 40,963 and 2,062 cars, respectively. Toronado second generation produced in the period 1971-1978. Externally, the car began to look more like a traditional executive sedans, dimensions increased (base increased by 7.6 cm). For the first time, repeaters of brake lights and airbags were used.

Upholstery was velor, fabric or leather. The back seat had an armrest and was split at a ratio of 2: 3. As befits a luxury car, the Toronado had a long list of standard equipment, including power steering, height and reach adjustment, electric clocks, carpets and alloy wheels, air conditioning, AM / FM stereo player, cruise control, power windows and central Castle. Since 1971, in the light of stricter environmental control requirements, the power of the 7.5-liter engine was reduced to 350 hp, in 1972 - to 250 hp, and in 1976 it became equal to 215 liters. from. In 1977, the production of a smaller 6.6-liter engine began. 3-speed automatic transmission remained unchanged. 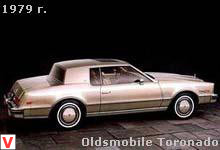 The front torsion bar suspension has been preserved, springs have appeared instead of springs in the rear. Disc brakes with brake pad wear sensors are used in the basic equipment. From 1979 to 1985, the third generation of the popular model was produced. 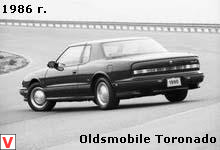 The V8 engines were excluded from the production program, only the 3.8-liter V6 powerplant from Buick remained (170 hp / 4800 rpm, 327 Nm / 3200 rpm). They are aggregated with a 4-speed automatic transmission 4T60. Interior equipment, as in previous versions, was luxurious and included almost all possible options for the car. The second half of the 80s brought a serious decline in sales of the model, which was largely due to competition from mid-size and cheaper cars, such as the Pontiac Grand Am. 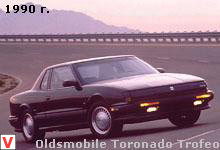 In 1987, the management of the Oldsmobile branch attempted to get out of this situation by launching a version of the Toronado Troféo, equipped with leather sports seats, a dual exhaust system and a stiffer suspension; the size of this version has been significantly increased, and the exterior is made especially aggressive. 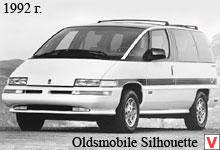 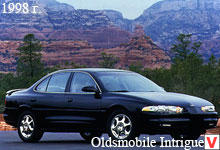 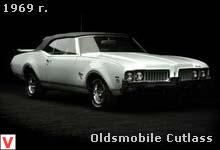