Mitsubishi Eclipse debuted in 1989. The first generation went under the symbol 1G. Eclipse was going on the basis of the famous Galant VR-4, which brought fame to the Mitsubishi rally team in the early 90s. The car is mainly intended for lovers of fast driving, who can not afford expensive sports cars.

The idea was successful, the market took a novelty with a bang. The dynamic 2-door coupe body, rising front optics and an elegant rear wing emphasize the sporty character of the car. The first Eclipse cabin was designed for two adult passengers. Moreover, thanks to a wide range of adjustments of the driver's seat and the height-changing steering column, even a tall man could comfortably get behind the wheel. But behind the storage space is clearly not enough.

Despite the fact that the Mitsubishi Eclipse is smaller than the Galant (4340 / 1690/1300 against 4540/1695/1400), it is slightly heavier - 1215 and 1185 kg, respectively, due to the reinforced body designed to carry heavy loads and the safety cage around the perimeter. Inside the doors, under the headlining of the ceiling and dashboard, stiffness bars are installed, under the bottom of the body there is a longitudinal beam, and the front and rear bumpers are mounted on special shock absorbers, the purpose of which is to extinguish the impact energy in collisions. Under the hood, Eclipse placed the four-cylinder 4G63 engine, unique at that time, in three versions.

The atmospheric 92-horsepower 1.8-liter was weak for a 1215-pound car with a clear claim to sportiness. Acceleration to "hundreds" was a full 11 seconds. The 2.0-liter 140-horsepower (basic version of the front-wheel drive) and, finally, the same, but already with turbocharging.

From Galant got the same transmission, electronic circuits and engine control unit. Rack and pinion steering, equipped with a power steering on all versions, sharp and sharp, provokes active driving. The Eclipse suspension is moderately stiff and keeps the car well even when maneuvering at high speeds, which is also facilitated by the powerful anti-roll bars mounted in front and behind. The suspension of the car received a special name Multi-Link. In all-wheel drive versions of the rear used complex multi-link, passive thruster suspension. It is noteworthy that the Eclipse of the first generation had a rather high ground clearance for cars of this class - 160 mm.

Since 1992, in the standard all versions are equipped with ABS. At the same time in the American versions began to abandon the opening front optics. The second very seriously updated generation Eclipse 2G appeared in 1995. The line of power units was reduced - a 1.8-liter engine was excluded. The 2-liter naturally aspirated engine was left unchanged, but the power of the turbo version was raised from 195 to 213 hp. As before, produced front-wheel drive and all-wheel drive modifications. In 1996, the Spyder convertible was added to the family in two versions: with an atmospheric 2.4-liter engine (GS grade) and a turbocharged 2-liter engine (GS-T).

In 1997, Mitsubishi Eclipse underwent a slight change. The most noticeable was the new, highly installed spoiler on the GS-T and GSX models. These powerful versions also received a new front bumper with a large air intake and other fog lights, plus 17-inch wheels instead of 16-inch ones.

Slightly modified the front part by changing the style of fog lights. The computer and the engine management program were completely "altered". The second Eclipse was made in the best traditions of biodesign. Not a single facet, everything is smooth and round.

In 1998, at the Detroit Auto Show, the Mitsubishi SST concept was shown. Spectacular coupe demonstrated a new design direction, called geomechanical style. And in 2000 there was a production car based on the concept, which is sometimes called 3G. The successor to the second-generation Mitsubishi Eclipse has become more lean, with raised sides and accentuated wheel arches.

Slanted headlights and taillights were replaced by optics, in the shapes of which the triangle prevails, the silhouette became even more impetuous. The body, as before, has a landing formula of 2 + 2, but in the new model, which has increased both in length and width, there is more room for rear passengers, now there can accommodate two adults of average height. The gamma of the power units is represented by an atmospheric 2.4-liter four (149 hp) and a 3-liter V6 (203 hp) in the GT version. Despite the more aggressive forms, Mitsubishi engineers in this generation refused to all-wheel drive variations. 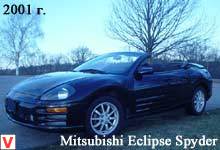 In order to please the American consumer, the chassis has been simplified, in particular, the multi-link front suspension has given way to a simpler McPherson scheme. The name of the “automatic machine” Sportronic does not reflect its essence: there is nothing sporting in it, despite the presence of a sequential choice of steps: it has only four gears. Interior design is very interesting. The instrument panel is especially original with separate wells of fuel gauge and coolant temperature indicators. The driver's seat with leather upholstery and electrically. In the third generation, the "bio" design changed to "techno", which was emphasized by three parallel shading on the sidewalls.

In 2001, based on the new Eclipse, they launched Spyder, which was presented at the Detroit auto show. There was also a “charged version” - Mitsubishi Eclipse Spyder GT with a V6 engine (3.0 l. 147 hp), the basic configuration of which includes full power, air conditioning, cruise control, anti-skid system and 17-inch alloy wheels. In the top version of the GTS, the power of the 3.0-liter V6 is increased to 210 hp. In 2004, in Detroit, demonstrated the Mitsubishi Eclipse Concept-E - the forerunner of the fourth generation of Eclipse.

It is worth noting that despite its futuristic, the appearance of the concept car intersects with the latest generation of Mitsubishi Eclipse. This also applies to the shape and location of the front headlights, and the characteristic line of the rear pillar, smoothly flowing into the body. Meanwhile, in the design of the presented car, elements of the brand's new corporate identity appeared - a large emblem of Mitsubishi and another design of the rear end. In addition, Eclipse Concept-E boasts a huge glass roof in the entire roof. However, the most interesting in the conceptual novelty is hidden under the body panels. This is the newest hybrid power plant, called the E-Boost.

In the normal mode, the Eclipse Concept-E is driven by a new 3.8-liter V6 engine with a new variable valve timing system, with an output of about 270 hp. When it is necessary to accelerate sharply, the electronic system connects a 200-strong electric motor that drives the wheels of the rear axle. In addition, this system can replace (in a sense) the all-wheel drive system. Another advantage of E-Boost is that such a scheme is much more economical compared to conventional engines, developing a similar power. 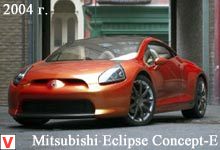