The first generation Diamante debuted in 1989. The car belongs to the business class and is represented by a sedan and station wagon. In 1996, the second generation Diamante was launched at the Nagoya-Okasaki plant. It has absorbed many of the latest achievements in the field of engineering. They installed an engine with a complete combustion system, a traction control system and a traction control system (TRC - Traction Control), a multi-valve power steering system that provides high sensitivity steering at any speed, and a 4WS system that automatically reacts to the speed and position of the steering wheel.

In addition, the automatic transmission INVECS-II with a sport mode and the possibility of mechanical control is used. Also installed a system of previewing and controlling the distance, a warning system for an emergency pressure drop in tires, a door-locking system, a safe window lifter and a hatch preventing pinching. The creators of Diamante generously endowed the car with the latest new achievements. The suspension of all the wheels is independent on the transverse arms, while the upper lever is “real” and the lower one is formed by a combination of longitudinal and transverse rods.

Both front and rear suspension mounted on subframes, which are attached to the body through vibration absorbing pads. Suspension copes with small irregularities and a sharp difference in height (such as holes in the asphalt or hatches). The car perfectly keeps the set trajectory of movement along the arc and is well obeyed by the steering wheel. ABS ventilated disc brakes on all wheels. In the cabin are comfortable, moderately hard bucket seats and torpedoes, made in the corporate style of Mitsubishi, with a distinctive visor over the instrument cluster.

The armrest of the driver's door is literally littered with keys and buttons - control windows, lock doors and windows, setting exterior mirrors, "memory" of the seat settings. Below the armrest next to the pocket for small items are buttons for remote trunk opening and fuel filler neck. The steering column is adjustable tilt. At the bottom edge of the lining of the steering wheel hub - the buttons control some functions of the stereo system. The car looks stylish and solid. The elongated back of the body gives the silhouette power and speed.

Diamante resistance coefficient (0,28). This rather unusual car has an impressive set of qualities inherent in the best representatives of the business class. The assembly of the next generation Diamante began in 2002. The release was adjusted at the Australian MMAL plant in Tonsley Park.

The base of the body, door and roof remained unchanged. The main differences from the previous generation in the design of the front and rear, developed in the new corporate style of Mitsubishi with a "wedge" on the grille and slanting large headlights. For the domestic Australian market, two versions are offered - Magna (overall dimensions 4860x1785x1435) and the more expensive Verada (overall dimensions 4978x1785x1435) with sedan and wagon bodies. In the United States and Canada, the car was delivered under the name Diamante. 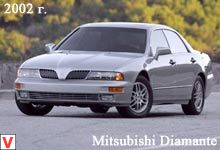 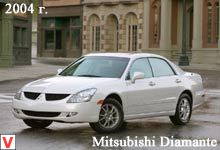