The Mitsubishi Colt, a small B car, appeared in 1984 to compete with such compact cars as popular in Japan as the Nissan March, Toyota Vitz and Honda Fit. Colt first years of release is a shortened version of the Lancer. Later, the car began to be produced as an independent model. In 1987, the third generation of the Colt. High build quality, decent interior for those years, and Japanese reliability made this model popular around the world. In late 1991, will debut the fourth generation of the Colt. Completely changed the appearance and design of the cabin.

On the driver's seat, the driver of any build will be comfortable. At a high level, the overall reliability of the car. In 1995, the fifth generation of the Mitsubishi Colt. 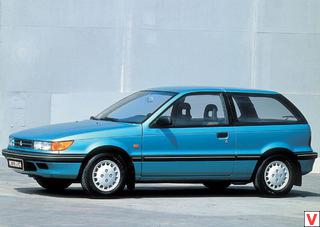 This car is an excellent choice for fans of active driving, combined with a low price, an acceptable level of comfort and high reliability. In 2002, the sixth generation of the Colt appeared in the model range of the company. In the design of the exterior of the car of these years of release, an unusual line of the body stands out, starting smoothly from the hood and falling sharply to the rear bumper. The design of the front of the body reflects the new "face" of the 21st century Mitsubishi. Interior design clearly corresponds to two directions - simplicity and novelty. The principle of Custom Free Choice ("free choice of the buyer") was taken by the manufacturer as a basis.

There are many variations of Mitsubishi Colt. In addition to the two interior design options - Cool (“cold” colors) and Warm (“warm” colors prevail), traditionally there are 3 main modifications: Casual, Elegance and Sport. In addition, there is the possibility of free choice of engine size, drive (front or full), wheels, seats and, of course, color. The range of power units Colt consists of inline 4-cylinder 16-valve gasoline engines of 1.3 and 1.6 liters, respectively, 82 and 103 liters. from. Suspension of all wheels is independent, spring. Gearboxes mechanical 5-speed and automatic INVECS-II. 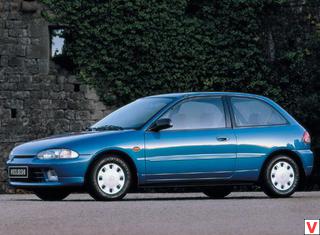 At the Geneva Motor Show in 2004, Mitsubishi introduced the next generation of the Colt family. This is the first joint development of the Mitsubishi and DaimlerChrysler alliance. Colt will share the platform with the four-seater Smart Forfour presented last fall. Approximately 60% of the components of these cars are common. Long before the European premiere, Colt successfully debuted in the home, Japanese market. Work on the compact model began in 1999, and in November 2002, the car was presented at the Tokyo Auto Show. The novelty was significantly different from its counterpart sold in Japan.

Europeanized design, overall stylistic unity with the previously presented Grandis and Lancer Evolution. The European Colt is clearer than the Japanese version, the details of the front and rear parts are spelled out. "Tone set" front pillars, which smoothly into the wings. The picture is complemented by integrated bumpers. Noticeable details - small windows located in front of the rear-view mirrors, and inverted triangles of small rear windows, defining the reverse tilt of the rear rack. In general, the Colt looks simple, modern and stylish. 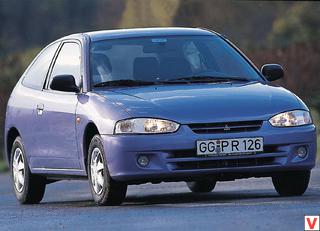 The interior design is distinguished by high-quality finish, attractive style and original color scheme. The devices are located in individual niches under the elegant visor. Silver buttons control stereo audio, electric drive and heated mirrors. Silver elements adorn the deflectors of the ventilation system of all Colt, and silver door handles are installed on versions INVITE and INSTYLE. Even the front panel has a special "grain" finish, which gives the interior a fresh, stylish look. Separately, these are details, but together they create the impression of the integrity of the interior design and the atmosphere of a real style.

Salon new Colt has a record in its class size and a large number of transformations. The driver and passengers can enjoy the space, which is usually found in cars of a higher class. At the same time, the small dimensions of the Colt provide ease of driving and maneuvering in the city, like all of his classmates. The backs of the rear seats fold apart in the ratio of 60:40 forward, and can be fully folded, upright against the front seats, and also moved separately by 15 cm in order to increase your legroom or luggage compartment. If necessary, to maximize the luggage compartment, you can remove the rear seats from the cabin. 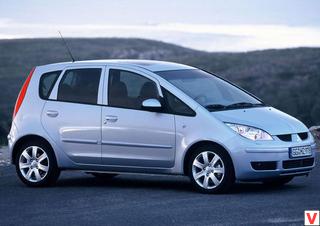 Even the front passenger seat back can be fully folded forward to carry long items. Mitsubishi has developed a completely new range of ultramodern MIVEC engines for the new Colt. All of them are equipped with a proprietary innovative system of variable valve timing and valve lift, thanks to which the engines have a high specific power and provide smooth traction in a large rev range. All engines have impressive power for their size, high reliability and fuel economy. The choice is available petrol engines of 1.1 liters three-cylinder (75 hp) and two four-cylinder - 1.3 liters (95 hp) and 1.5 liters (109 hp).

There are also two options for the 1.5-liter Common Rail diesel engine with a capacity of 70 and 95 liters. from. The standard Colt is offered with a 5-speed manual gearbox. The Colt is equipped with a McPherson strut front suspension and a semi-independent torsion bar design with no anti-roll bar at the rear. Depending on the version Colt is equipped with 14 - or 15-inch wheels. The basic package includes ABS, EBD and electric power steering. For a fee, you can order a proprietary stabilization and traction control system MASC (Mitsubishi Active Stability Control). A high level of passive safety is provided by a well-thought-out structure of the body with its own name RISE and six airbags. 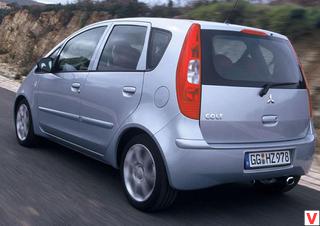 The latest generation Mitsubishi Colt is a modern, attractive, inspiring design, a combination of cheerful character, functionality, style, solidity. In short, a car that fully meets the exacting tastes and needs of people of the 21st century. In the fall of 2004, Mitsubishi introduced the compact family minivan Mitsubishi Colt Plus. At the heart of this car is the Mitsubishi Colt platform, however, the car itself turned out to be more basic model and has more opportunities for the transformation of the cabin. The overall length of the Colt Plus is about 30 centimeters longer than the base model, which has a positive effect on the stock of free space in the rear.

At the same time, the width and height of the car remained unchanged. This is not to say that the appearance of the Colt Plus is amazing with the novelty of its design. And yet it is perceived in a special way. The car received folding rear seats, as well as the transformation system Versatile Cargo Floor. 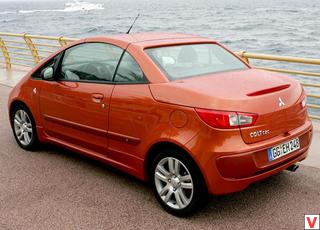 We also note the fact that the increased dimensions of the car led to a number of changes in the appearance of the compact van. However, the similarity with the base Mitsubishi Colt, of course, remained. In the role of the main driving force, two power units are offered: a new 1.5-liter engine and another option with the same engine in terms of volume, but complemented by a turbocharger. This modification is called Ralliart. Turbocharged 1.5 liter engine produces 147 hp equipped with the top version of the Colt Plus. Engines are completed with new transmission - a stepless CVT INVECS-III. The uniqueness of the Colt Plus rests, one might say, on two pillars - practicality and speed.

If we talk about practicality, it should be noted that as a result of the redesign, the length of the trunk has become equal to 645 mm, which brings the car closer to the subcompact universals. If you use the lever, which is located in the luggage compartment, you can tilt the back of the rear seats forward. The seats themselves can be doubled in one movement, in the luggage compartment you can reinforce something like flexible cargo flooring, which is mounted on two levels. We should also note the electric lift back, that is, the trunk door. Taking into account the above equipment, we can safely say that the practicality of the Colt Plus is raised to a very high level. 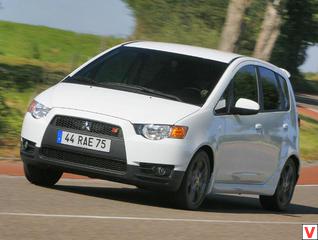 A few words about the performance Colt Plus. The standard version is equipped with, as mentioned, a 1.5-liter engine - a joint development of engineers from Mitsubishi and Daimler Chrysler, produced in Germany. Compared to the previous 1.5-liter engine, the new one shows an increase in power of 7 horsepower and torque by 0.9 kg per meter.

This power unit is made of aluminum alloys, which made it 20 kg lighter than its predecessor. At the same time, the efficiency of the burned fuel has increased. In short, the Colt Plus is a car at a reasonable price for those who appreciate practicality multiplied by high speed. 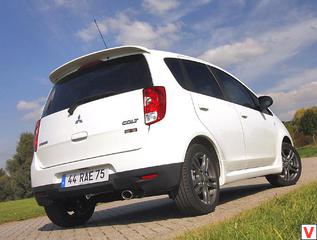 In early 2005, a sporty 3-door version of the Colt CZ3 appeared. The CZ3’s 5-door hatchback is distinguished from a modified front and rear design (the rear lights are horizontal, like those of the Alfa Romeo), sporty notes in the interior (new sports seats with red stitching, aluminum lining, sports instrument cluster in separate “wells”) . On the CZ3, the same engines are installed as on the 5-door Colt, and the top version of the family, the CZT has a 1.5 liter R4 16V engine with a turbocharger developed under the hood, which develops 150 hp. In addition, the CZT has a reinforced body structure with a stretch between the front struts and wide 16-inch wheels.

In 2009, the Colt have undergone major changes. The model is still offered in the three-door version and the classic five-door version. The car has changed its appearance and acquired aggressive features, while becoming more comfortable. The new design of the front part, fit into the image very harmoniously.

The three-door version turned out to be especially dynamic. From the distinctive, powerful front end to the embossed rear lights, everything in the exterior of the Colt 2009 clearly indicates that it belongs to the Mitsubishi models. Impressive appearance is complemented by practical characteristics. The model has one of the most spacious salons in its class.

The height-adjustable steering wheel and driver's seat allow you to choose the optimum position for driving. The buttons on the steering wheel allow you to control the stereo and cruise control without taking your eyes off the road. As a result of the restyling process, Colt acquired some features previously unavailable for this model. Among them: the inclusion of an emergency light alarm during emergency braking (Brake Assist system), lights with a delay off (function Follow me home), an improved air conditioning system and dashboard. In addition, in Colt 2009 installed AUX audio system with the ability to connect external multimedia devices.

The system of sound insulation underwent a complete revision. A distinctive feature of the cabin - a huge number of pockets and shelves throughout the cabin; for every little thing there is a place. Mitsubishi engineers decided to make life easier for passengers from the rear seats by reducing the luggage compartment volume from the previous 1200 liters to at least impressive 1032 liters.

However, compactly folding rear seat backs can compensate for the reduction in the trunk. The seats themselves are now fixed, the slides have been removed from their design. The range of engines consists of three petrol units: 1.1 (75 hp), 1.3 (95 hp) and 1.5 (109 hp). From the turbodiesel 1.5 D-ID (95 hp), the company decided to refuse. Transmission to choose from: the traditional "mechanics" or the AllShift robotic box.