The MG TF is a double-top convertible - a roadster that was launched in 1953 by the MG Car Company (since 1952 - BMC). This model replaced the MG TD and differed from it only in design elements, such as a sloped grille, lower bonnet line and stylishly framed front headlights located on the wings of the car. The external grille has now become a decorative element, as the air injection system has been improved and worked better in hot climates. Like the previous models, the wings were not integrated into the body, and the hood opened on both sides.

Essentially, the MC TF was an intermediate model necessary in order not to stop the production process until a new model called the MGA was approved for production by the BMC board of directors who were not interested in a competitor for Austin-Healey. This car had a four-cylinder engine of 1250 cm ³ XPAG under a cowl. The power of such a power unit was 57 hp Also, this car was equipped with a four-speed manual gearbox. In 1954, by increasing the diameter of the cylinders, the engine capacity was increased to 1,466 cm³, and now its power was 63 hp. at 5,500 rpm. This engine was named XPEG, and the car itself received an index of 1500 and became known as MG TF 1500. 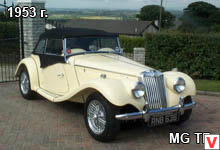 The last cars of this model came off the assembly line in 1955, after which this model changed the MGA model. In just two years of production, 9,600 machines were produced, 3,400 of which are the TF 1500 model. The name "TF" began to be used again in 2002 in relation to sports cars MG TF. The new version of the TF is a rear-wheel roadster with a centrally located engine in relation to the wheelbase. The production of this model was launched in 2002 by MG Rover. This model continued the MG F line of models and was named after the classic MG TF, which was mentioned above.

The most significant technical changes were: the rejection of the hydropneumatic suspension in favor of the classical cylindrical spring; The new design of the air intake system, which, together with the new camshafts, produces more power than in the MG F engine, and the torsional rigidity of the case increases by 20%. External changes to the model include an updated grille, a new design for the headlights, bumpers, side air intake grilles, rear compartment, etc. MG TF was the first model in its class to be awarded the highest, 4-star security category from EuroNCAP. 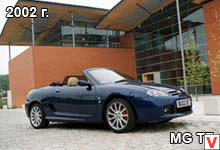 In addition, it is worth noting that acceleration from standstill to 100 km / h takes only 8.8 seconds for the MG TF, and the maximum speed is 205 km / h. In 2005, the engine coolant temperature indicator had to be included in the MG TF package, which, in essence, had to notify the driver in advance of a possible breakdown in the event of a coolant leak. It was also planned to improve the stiffness of the engine. But this was never done, as MG Rover went bankrupt before it could introduce these modifications to the standard package. On July 22, 2005, Nanjing Automobile Corporation acquired MG Rover, and in August 2008 resumed production.

The company's intention is to assemble 200,000 TF cars per year at the Nanjing plant. Experts from the Longbridge plant were brought to work on the new TF in Nanjing. In addition, the company has outlined its plans to launch MG TF in Ardmore, Oklahoma and Longbridge, UK.