The first Mercury Marauder was introduced at the dawn of the era of “muscle machines” as a 1963 model in the form of a two-door slant-back - a car with a sloping rear section and a length of almost 5.5 meters, a wheelbase of 3048 mm. At that time, specially prepared Mercury cars under this name achieved excellent results in body racing, and the “civilian” version was supposed to bring financial rewards to the company. In the range there were two V-shaped eight-cylinder engines - with a volume of 6.4 and 6.6 liters, the latter developed a power of 405 hp. (in those days, the power of the motors was not measured as it is now, which overestimated the results).

The coolest version of the Marauder was released by the 1964 model year - with a 7 liter Super Marauder V8 engine, which developed 425 hp. (again, as before). This engine has absorbed all the achievements in the field of engine-building of the 60s - a dual four-chamber carburetor, 11.5: 1 compression and much more. Since 1965, for four years, the name Marauder has not been used. In 1969, the second generation Marauder was introduced on a new platform. The car was full-sized, even by American concepts. 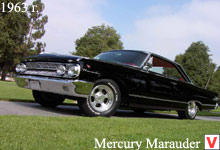 It was in 1969 that Marauder received the status of an independent model; before that, the name was used only as an embodiment. In 1970, the car was removed from production. But the Mercury Marauder was destined to return to the American market. Many years later, the light saw the five-door five-seater sedan Marauder 2003 model year. Large, beautiful, safe, comfortable American car in the full sense of the word. Its appearance was preceded by a concept car, shown in 1996 at the American SEMA. At the heart of the car is a platform borrowed from the Grand Marquis. The model has not only undergone significant changes, it was created anew. 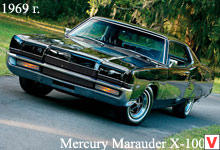 She has a completely new frame of durable light steel, a new independent front suspension and new shock absorbers, which makes the driving process more enjoyable. Under the hood, a 4.6-liter DOHC V8 engine, 16-valve, which gives a power of 302 hp Torque - 400 Nm. The only available transmission option is the 4-speed automatic. The car is able to accelerate to 100 km / h in 6.5 seconds.

The Marauder has got 18-inch light-alloy wheels and P235 / 50ZR tires in front and P245 / 55ZR at the rear. Of the other innovations, it is necessary to note a rudder-mounted electric steering wheel, an improved brake system, which, in case of sudden braking, allows one hundred percent to apply all brakes, even if the driver does not press the pedal at full strength. The seats have become much more convenient, so that the driver does not "chat" in the chair during sharp turns, the seats are made almost like sports - with sidewalls at shoulder and hip level and a roller under the waist. The front seats have eight directions of adjustment. 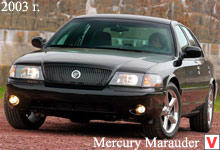 In the cabin there were cup holders, a seat belt for the middle rear passenger, and door trim from the inside began to look much prettier. An oil level sensor and a voltmeter appeared on the dashboard, and the logo, the winged god Mercury, is displayed on the backs of the front seats. 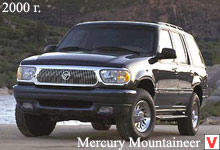