The first generation Mazda Capella was produced in Japan in the class of compact models with coupes and sedans from 1970 to 1974. The name Capella was intended for the domestic market, and for export, including to the USA, this rear-wheel drive car with a 1.6-liter engine (104 hp, 144 Nm) was sent under the symbol 616. In 1972, the American roar version received the engine 1.8 liters and an index of 618.

In 1977-1982 came the release of the second generation Mazda Capella. In all export markets, the model was sold under the name Mazda 626, and only in the UK as the Mazda Montrose. The third generation of Capella appeared in 1983. As before, the export version was offered as the Mazda 626, and for some markets this car with a slightly modified body was called the Ford Telstar. In 1987, production of the next generation Mazda Capella began. It was already a “middle class” car, since the GD platform on which this car was assembled was updated, and in 1993 the structure underwent further changes, starting with the new GE platform. 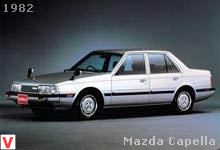 As a result, Mazda Cronos appeared in the Japanese market as one of the versions of Mazda Capella. The fifth generation of the model was produced in 1994-1997, and the sixth from 1997 to 2002, and in 1999 an additional upgrade was made. The Capella's successor was the Mazda Atenza, better known outside Japan as the Mazda 6. Capella was produced not only in the sedan, but also in hatchback and station wagon. The body dimensions of the most mass sedan in the 1994 version are 4595/1695/1395 mm with a base of 2610 mm. Vehicle curb weight is 1130/1160 kg, depending on the type of transmission. Since 1997, the body height has increased by 45 mm, and the length has decreased by 20 mm.

The exterior has become more “inflated” in the spirit of the automotive fashion of those years. The dimensions of the latest version of Capella, produced from 1999 to 2002, is 4590 x 1695 x 1455 mm with a base of 2610 mm and 1465/1470 mm; body height increased by another 15 mm, which favorably affected the capacity of the cabin. Basic equipment includes power steering, height-adjustable steering column, air conditioning, electric windows, electric mirrors, central locking with remote control, radio, fog lights and an additional brake light. 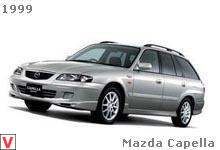 Ergonomics is good and does not cause complaints. The driver's seat is functional, the seat has adjustment in three planes and is convenient for a person of almost any build. The back of the rear seat folds in a ratio of 2/3, which increases the possibilities of an already roomy trunk. On the 1994 model year Capella, 4-cylinder 16-valve gasoline engines were installed with a DOHC gas distribution system with a volume of 1,839 liters (115 hp / 5500 vol) and 1.991 liters (125 hp / 5500 vol). 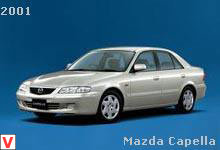 at 4000 rpm Diesel fuel consumption in the country cycle is only 3.3 liters per 100 km of track. All gasoline engines are aggregated with a 5-speed manual gearbox or with a 4-speed automatic transmission. The diesel engine was installed only in a pair with 4AKPP. The model was equipped with both front and all-wheel drive with limited friction differential. Independent front suspension with MacPherson strut, coil springs, wishbones and a stabilizer, rear multi-link Strut type with springs and an anti-roll bar.

Ground clearance is 150 mm (for versions of the 1994 model year), 165 mm (1997), 160 mm (1999) or 155 mm for diesel models. Steering with a rack and pinion and power booster is light and fairly informative. Brakes front ventilated disc, rear for versions with 1.8-liter engine drum with automatic adjustment of the clearance of shoes, and for 2-liter - also disc. The standard tire size is 185 / 65R14 86S and 195 / 60R15 88H for a more powerful 2-liter modification. The passive safety system provides for the energy-absorbing structure of the MAIDAS bodywork with door stiffness amplifiers and 4PB.

Of the active in the presence of ABS and the system of control of adhesion to the road. Mazda Capella 4WD was named "Japanese car of the year 1982-83." In 1992, the Mazda 626 received the title of "Car of the Year", and the magazine Motor Trend (USA) called it the "Import Car of 1993". The Mazda Capella (626) model, produced from 1997 to February 2002, is one of the most popular in Russia and remains in demand on the secondary market.